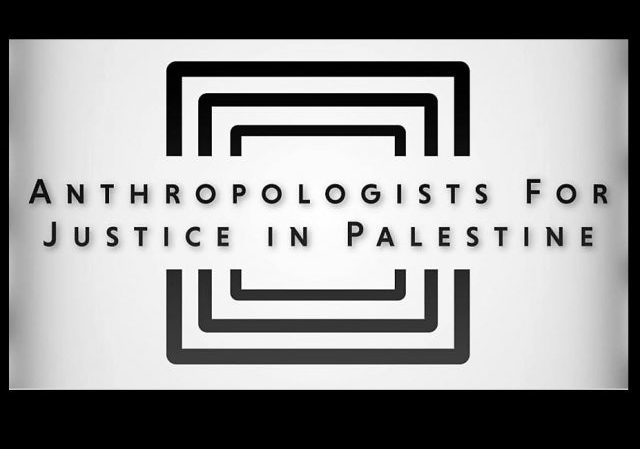 We’ve written extensively of the disturbing phenomenon of anti-Israel activists taking over professional and academic associations (even associations in memory of holocaust victims), and diverting them for their own radical political agendas.

This has been especially pronounced in the long battle that seems to dominate large portions of the social sciences and humanities academy: we refer of course to the apparently serious question of whether the academy should be devoted to the furtherance of knowledge and wisdom…or whether it should be devoted to fighting the State of Israel.

The latter course has been preferred by some academic associations and seems to command a serious following in others, such as the Middle East Studies Association, the Modern Language Association (MLA), and the American Anthropological Association (AAA). These organizations have yet to adopt a formal boycott of Israel (in fact, the MLA rejected a pro-BDS resolution and is in the midst of voting on an anti-BDS resolution).

AAA put a boycott resolution to its membership last year. The resolution lost by 39 votes.

This has not stopped the AAA leadership from activism on the Israeli-Palestinian front.

In November, President Alisse Waterston announced the formation of a Palestine-Israel Fellowship Fund for Travel, designed to support both Palestinian academic and ‘dissenting Israeli scholars‘ (Palestinians need not dissent, and Israeli dissent must be directed towards Israel, of course).

Boycott activists have not relented either. In a post-mortem column, Lara Deeb and Jessica Winegar attempt to explain their failure to secure a majority vote for boycott with the membership. Not to worry, the post-mortem blamed the loss, not only on meddling by the Israeli government, but also the nefarious effect of ‘outside money’ from ‘Zionist activist groups’ and ‘groups like the Schusterman Family Foundation’.

But after blaming Zionist power and money, the analysis pointed to a further, “less blunt but no less insidious reason”:

…Put simply, this is the longstanding fissure between scholars who understand politics and academia to be intertwined and those who believe they are separable…With some notable exceptions, white men trained before the 1990s tend to hold on to notions of anthropology as an objective science, and of activism as compromising academic integrity. This is sometimes expressed in overt or microaggressive sexist or racist judgments of female colleagues or anthropologists of color. These demographic patterns of linking or delinking academia from political commitments were on full view during discussions of the boycott at the AAA.

The outcome of the full membership vote can thus best be explained by a combination of the pressures exerted by external, often Israeli-led, organized opposition to the boycott and to the lingering mythology that anthropological scholarship – and by extension, anthropologists and their scholarly associations, like the AAA — can and should be “objective” and apolitical.

The point on which the activists hold their hopes is that these awful, objective, microagressing “white men” are expected to dwindle over time (by virtue of death, retirement, etc.) and the power will shift. The strategy seems to be to keep pushing until this happens.

The boycott campaign, which has been continuously active since last year’s defeat, is now pushing a slate of its own for the upcoming elections for AAA governance: 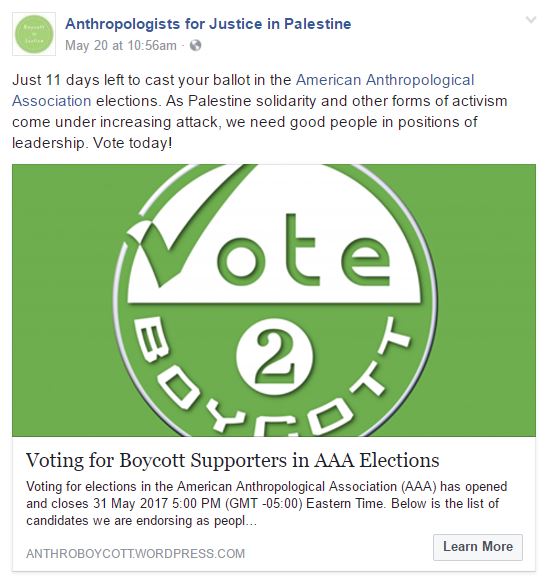 Just as the American Studies Association was desiccated and taken over by a radical wing with a single-minded agenda of its own, the radical wing of the AAA is taking over their organization in an obsessive quest to boycott Israel. A similar campaign, albeit, thus far less successful, took place at MLA. The pattern and modus operandi are clear.

Whether the slim majority of voting Anthropologists who oppose BDS will continue to hold, or will be worn out and exhausted by a coalition of activists who seem to have nothing better to do, is a good question.

The strategy of defeating boycott votes by canvassing and campaigning, year after year, seems Sisyphean and pointless: one victory one time for BDS is all that is needed for the campaign to work. A subsequent retraction would likely go unnoticed. And the opportunity costs are enormous: scholars are not paid to spend their lives campaigning for or against political actions of their professional associations.

The Modern Language Association strategy of voting in anti-boycott resolutions is unlikely to succeed at the AAA, and, in any case, is at best a parchment barrier. Other, more aggressive tactics, like lawsuits or secessionist organizations that leave their more contentious parent organization, might prove useful in some, but not all contexts.

It will take a while until this obsession abates. What will remain of our academic institutions and their vital importance in producing wisdom remains to be seen.

The author is a graduate student who must write under a pseudonym for fear of retribution from pro-BDS faculty.

“Anthropology” – another garbage academic discipline that amounts to little more than cross-cultural gossip. Completely useless for any real world applications. So, of course those people who found themselves in it have to find some way to do something that makes them feel “important”, so they cause trouble and foment hate. It’s all they got.

Macroaggressive comments are welcome, though, so long as they are aimed at permissible targets.

Who is funding this BDS crap? Follow the $$$, then CUT IT OFF.

Cut them off, and Lock them Up!

So who’s putting themselves on a list to be an Anti-Semite? guess the mailing list will be used for the KKK, the NAZI party of America, the Commie party of America and CAIR to name a few..