Article in The Atlantic exposes how group exploits Anne Frank’s name and memory for political purposes. 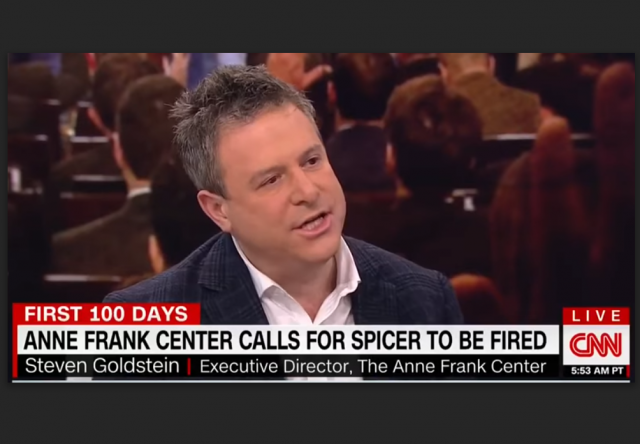 You almost certainly have heard of Anne Frank.

It’s unlikely that until Trump’s election you heard of an entity calling itself the “Anne Frank Center (US).” That’s because for most of its history, AFCUS has quietly done work educating people about Anne Frank.

Then in the spring of 2016 everything changed. AFCUS changed its focus, hired a political activist named Steven Goldstein, and began to reposition itself as a social justice organization.

AFCUS has, since Trump’s election, issued a series of inflammatory statements that get gobbled up by the media looking to bash Trump.

The accusations leveled by AFCUS were cartoonish, just what the media wanted: 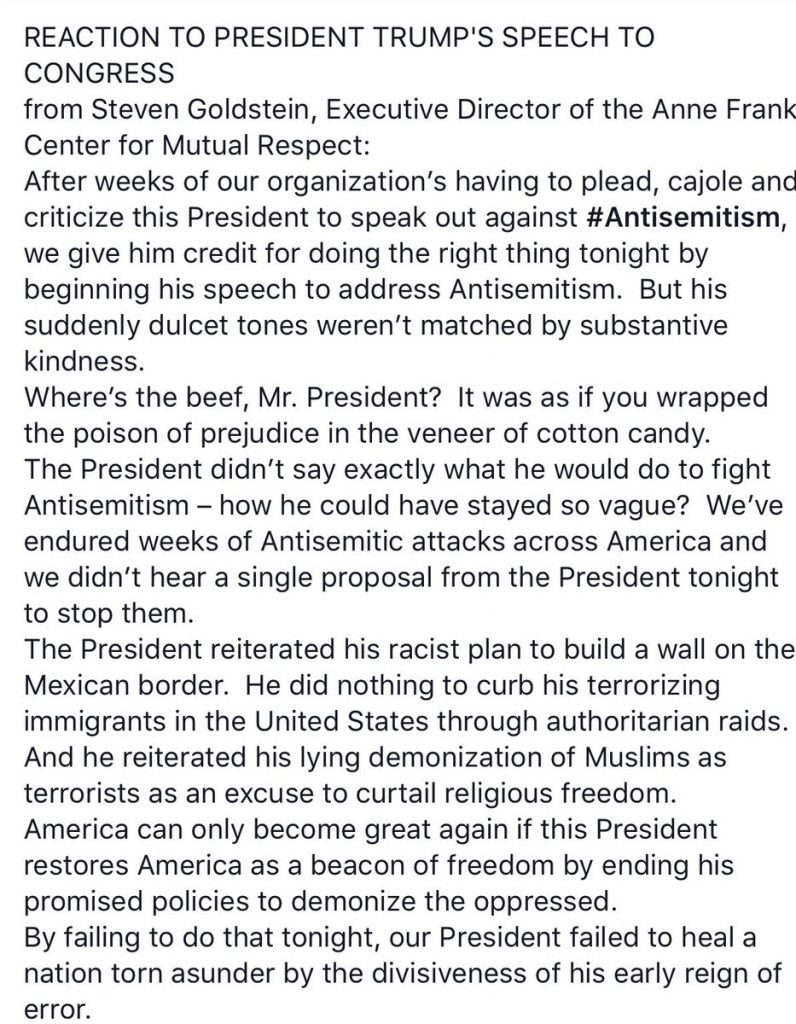 AFCUS held itself out as the voice of authority on anti-Semitism, using that authority to attack, among others, Sean Spicer: 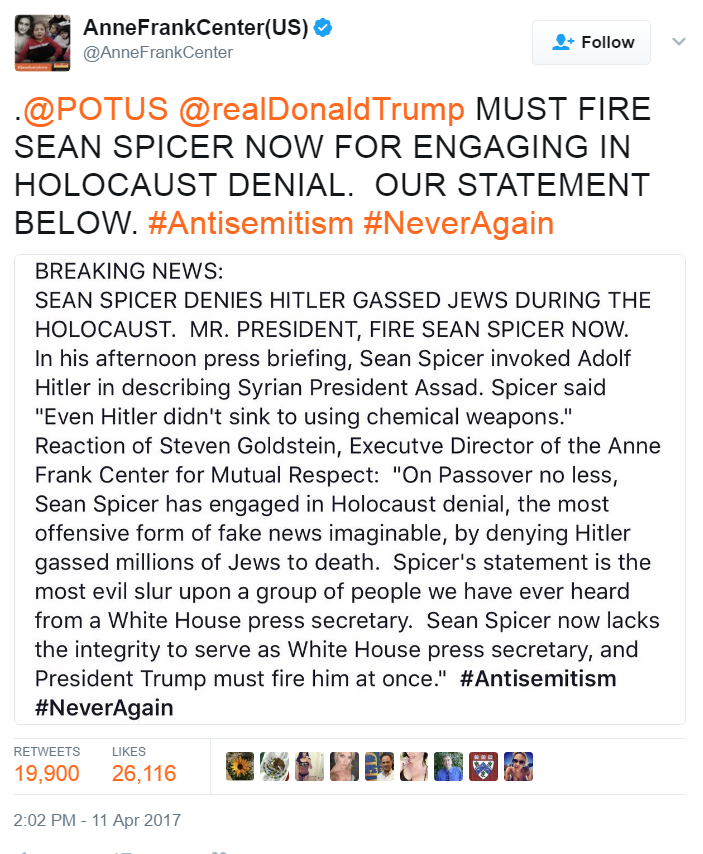 AFCUS, because it has Anne Frank’s name in its title, received media credibility as a source: 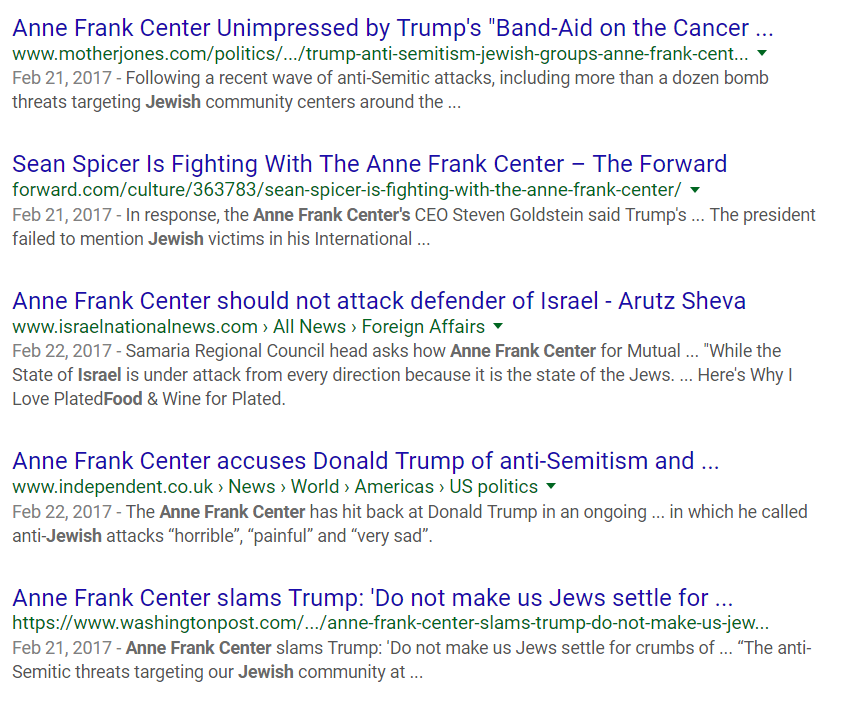 Goldstein was frequently on TV:

The claim that AFCUS was founded by Anne Frank’s father was critical to the organization’s asserted credibility, as this Washington Post article showed: 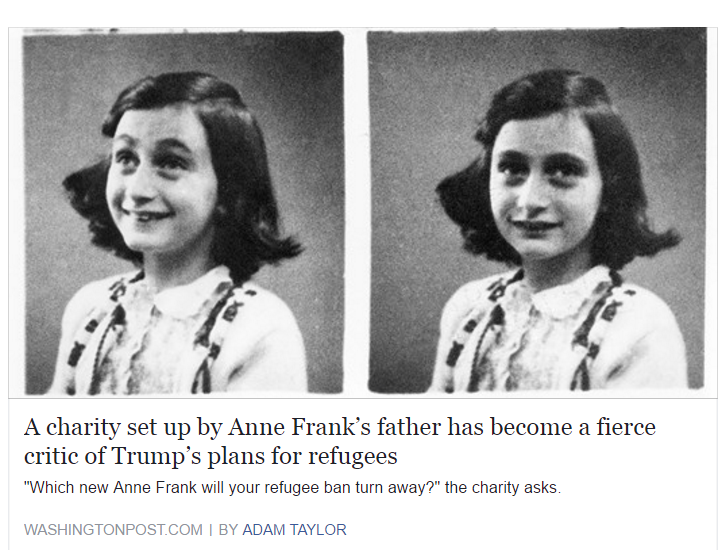 I’ve been trying to call attention to the fact that AFCUS was not what it seemed on Twitter for months. 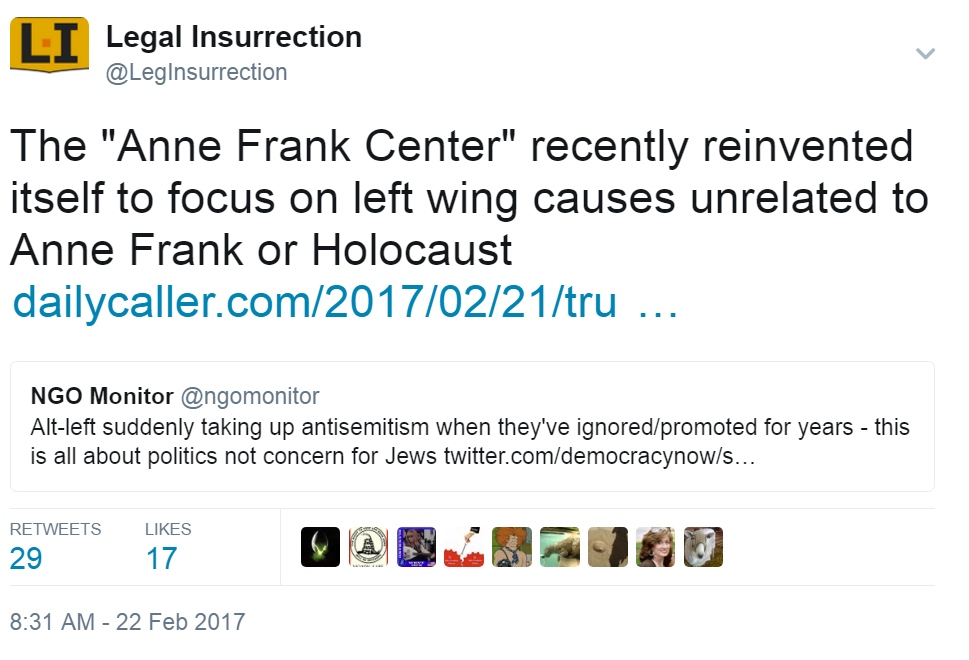 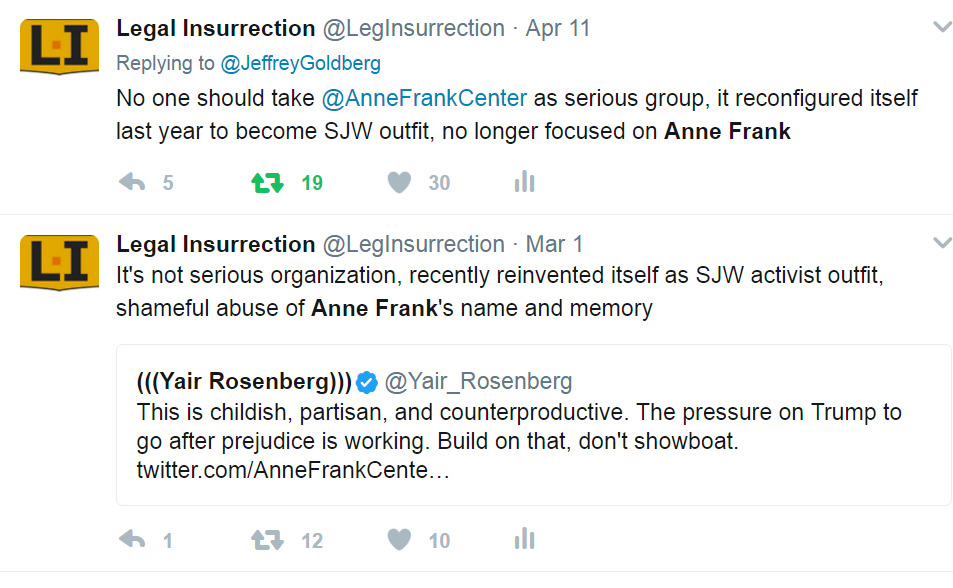 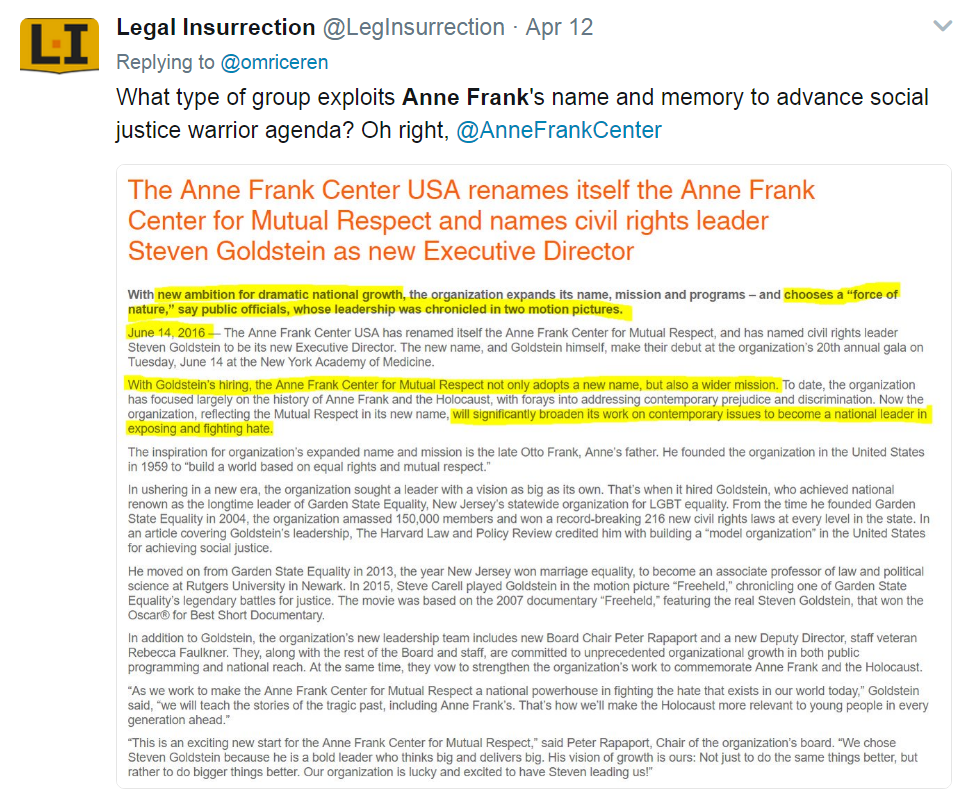 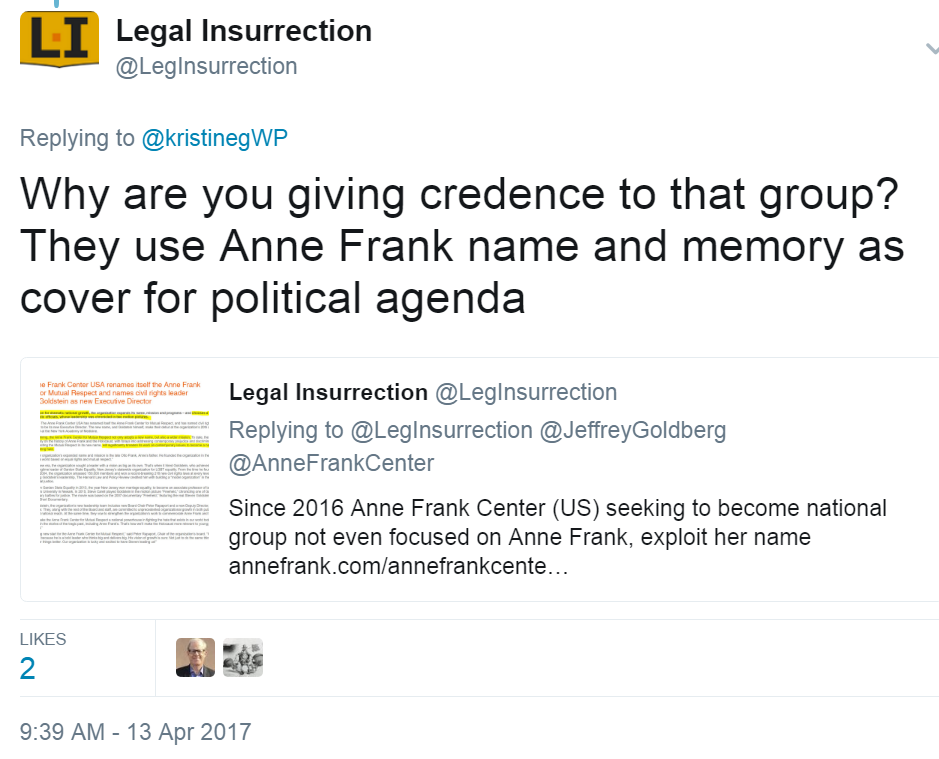 I gathered links, screenshotted and archived pages from the old and new AFCUS website, and laid the foundation for a major research post of the type I like to do.

But because I have less than zero available time, I never was able to fit in the days it would take to put it together. There always seemed to be some other event or issue more pressing. Our other authors also are on the verge of blogger burnout, and we don’t have the resources to hire more people. So I never wrote about the Anne Frank Center (US), I just kept tweeting to people, including to Jeffrey Goldberg, Editor in Chief of The Atlantic.

Along the way, Dave at IsraellyCool did groundbreaking work not only questioning AFCUS’s politics, but also whether it even was founded by Anne Frank’s father Otto, as it claimed.

That may not be the case anymore. The Atlantic has an excellent, in-depth article, Who Does the Anne Frank Center Represent? 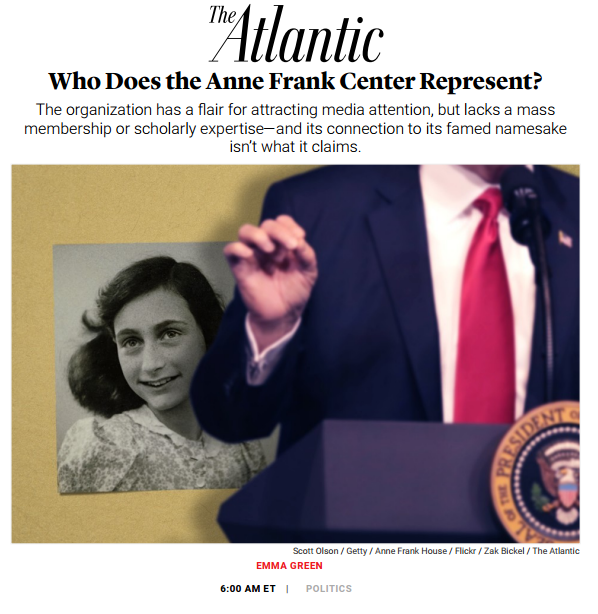 I encourage you to read the whole thing. It confirms what I’ve been tweeting and the doubt on its history probed by IsraellyCool.

Here is the punch line in The Atlantic article (emphasis added):

In other words, it is a tiny organization in the process of reinventing itself. The Anne Frank Center for Mutual Respect and Understanding may not be a Holocaust organization, a Jewish organization, or one founded by Anne Frank’s father. Its may not have leaders with a scholarly background, a mass membership, or institutional standing among Jewish groups and Holocaust museums. But because it talks a big game and wields the name of Anne Frank, the media has awarded it authority it never earned.

Is there anything worse than exploiting the name and memory of Anne Frank for political purposes?

That’s a question the celebrities featured at the AFCUS annual gala in June should be asking. 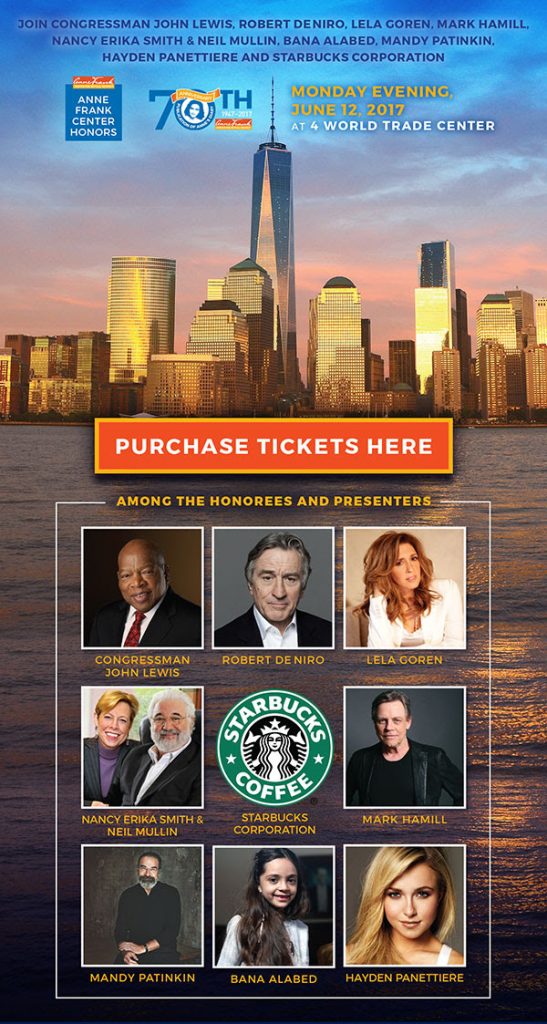 I tweeted at them asking them to read The Atlantic article.

What does Steven Goldstein, the new leader of AFCUS have to say? Well, he’s turned his Twitter account private, something I noticed weeks ago. In hindsight, it likely was because he had been contacted by The Atlantic and knew what was coming down the road. 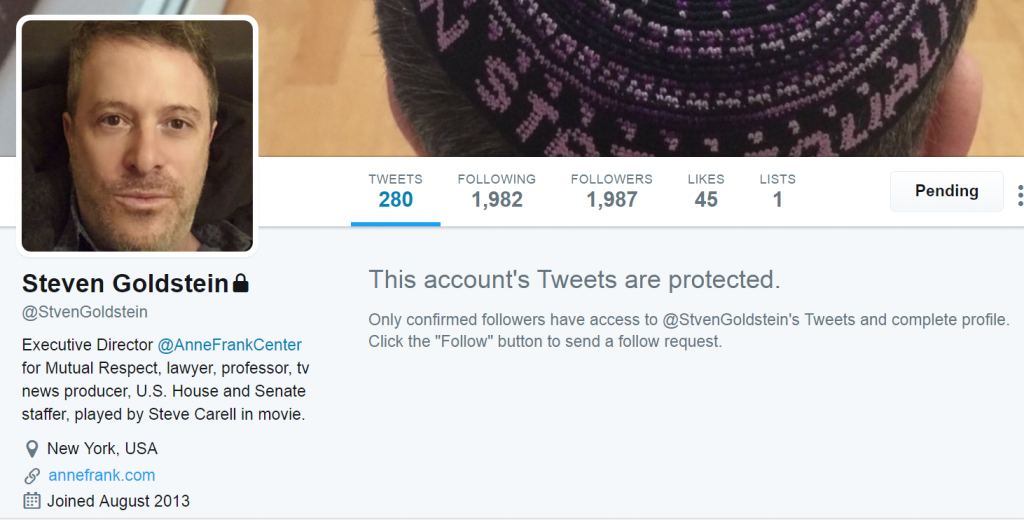 It’s become tiresome the way the left takes things out of context and then uses them to create controversy. It was obvious from the start that Spicer’s comments were referring to the tactical battlefield use of chemical weapons, as they were used in the First World War.

As for the rest of the article, it shows the left’s typical tactics of perverting everything it touches to reflect the far-left worldview – a worldview which has little, if anything, to do with reality.

There’s lots of $$$ to be made from Trump bashing. I’m sure their donations have gone up a lot since they changed the focus of the organization…

Congratulations and thanks for your work on this Professor. It reminds me of the fine work you did exposing Elizabeth Warren for the fraud she is. Unfortunately that didn’t prevent her from reaching the US Senate but may keep her from ever considering a run for the White House.

I hope the work done to expose the AFCUS will be more effective in neutering that organization or at least returning it to its original mission.

Hard to determine who is more vile Warren or Goldstein.

1. Identify a respected institution.
2. kill it.
3. gut it.
4. wear its carcass as a skin suit, while demanding respect.
#lefties

It appears that no connection to a historical person is necessary in order to creat a group using their name.

Somebody should start an organization for up and coming Democrat politicians entitled “The Hillary Clinton Center For Politicians Who Can’t Lie Good And Wanna Learn To Do Other Crooked Stuff Good Too.” It could teach them that there’s more to being a politician than keeping your stories straight and being really really good looking in news stories.

These people are the same SJW’s and anti-Semite Palestine First groups who have infiltrated organizations which have established standing with both national and international relations. They use the model of Saul Alinsky tactic’s to obfuscate the intent of the original group by infusing themselves to have a voting block to seat governing boards with the goal of globalizing their movement for the ultimate end of the existence of Israel and their people.

The one repetitive theme which continues to be in most all the investigative articles like this which Prof. J. so ardently tracks down.

How to stop those who are trying to re-direct the international policies and direction of our country? Name names and continue to air their dirty tactics in the court of public exposure.

They also use the name and its accompanying presumed authority to set themselves up as arbiters of political discourse and verbiage.
Lord help the political figure who uses a Hitler or Nazi reference to make a conservative point.

Spicer was correct: Hitler didn’t use chemical weapons, and he didn’t gas his own people. The Holocaust had no connection to the war, Cyclone-B was not a weapon, and the Jews were not his people.

None of this had to do with any moral qualms on Hitler’s part, but Spicer never claimed it did.

Every serious person knew what he meant.

Milhouse, I seriously question what you think a “weapon” is. The Nazis under Adolph Hitler certainly used poison gas to kill some of my relatives. How is that poison gas not a “weapon”?

Many of the people killed by the Nazis were citizens of Germany, Poland, Austria, France, …. How can you claim that German Jews and the Jews of occupied Europe “were not his people”? [Not that it matters if they were “his people.” Spicer was “talking stupid” in this comparison.]

I never understood how the Dutch were so well remembered.

OK I know why the Dutch are so well remembered.

But the Danes are still some of b***siest people on earth. The

They punch above their weight. Plus good pastry.

Although the Italians seem to have a contender.

The USCG National Defense Cutter seems to be the leading contender.

Just about anything would be a step up.

I didn’t mean to kill the conversation. Ironically enough it was a Nazi who tipped off the resistance that the Jews were about to be rounded up.

Danish Nazis are apparently not like normal Nazis. If there is such a thing.

Danish cab drivers tracked down anyone in the phone book who had Jewish sounding names. Put them on boats, took them to Sweden. Which, good on ’em despite trying their hardest to remain neutral too, them in.

The gub’mint tried to do away with the home guard a few years back. The Danes fought back. They were just a little too suspicious of their government, which seemed too cozy with the occupation.

Almost all the Danish Jews were saved.

It wasn’t a Danish Nazi, it was a German — the head of the Gestapo in Denmark, in fact. And he didn’t just “tip off” the Resistance, he orchestrated the whole thing. First he sent his deputy to Sweden to organize things on that end and make sure they were expecting the Jews and ready to put them somewhere. Having done so he deliberately leaked word of the supposed “round-up”, so that the Jews would all deport themselves and save him the trouble. Then he reported to Hitler that Denmark was now Judenrein. There never was any plan for an actual roundup, though if the Jews hadn’t taken the bait there would have been, since Hitler insisted on it.

OK. I offer a toast to bureaucrats saving themselves the trouble.

I still think that approximately 500 Danish Jews were killed by the Nazis.

Most of the Jews who did end up deported from Denmark were not Danish citizens; they were foreign Jews who’d come as refugees, and the Danes didn’t give a sh*t about them. Hitler was welcome to them, as far as they were concerned. Much like the Bulgarians, who stood up to Hitler and point blank refused to let him have their 50,000 Jews, but had no problem giving him all of Macedonia’s Jews as a consolation prize.

Just curious. If the Danes “didn’t give a s*** about them,” why did they pressure the Germans to allow the Red Cross to visit in June 1944 (accompanied by two representatives of the Danish government)? The Danish Jews got preferential treatment because the Danes actually did give a s*** about them. They were incarcerated at Theresienstadt, which was the garden spot of concentration camps. It’s claim to fame was the Verschonerung.

And if Denmark didn’t give a s*** about the Jews, why did they pressure Germany to give them back by 15 April 1945, weeks before Germany surrendered and weeks before the Soviets liberated the camp?

Oh, and saving them from a raging typhus epidemic that was brought to the camp by about 14,000 survivors of Bergen-Belsen who began arriving by 20 April, turning Theresienstadt into a h3ll hole.

I dispute your narrative.

The warning came, not from Georg Duckwitz, but from his boss, Werner Best. Duckwitz acted, not behind Best’s back, but on his orders. This was Best’s plan all along. He had no plan to round up and deport 8000 Jews. A few hundred stragglers he could handle.

“…It wasn’t a Danish Nazi, it was a German — the head of the Gestapo in Denmark, in fact…”

My bad. I was thinking of Quisling.

Liberals take-over institutions constantly. They exploit its goodwill, they change its message to Liberalism, they loot it, then leave it for dead. Disney is another good example.