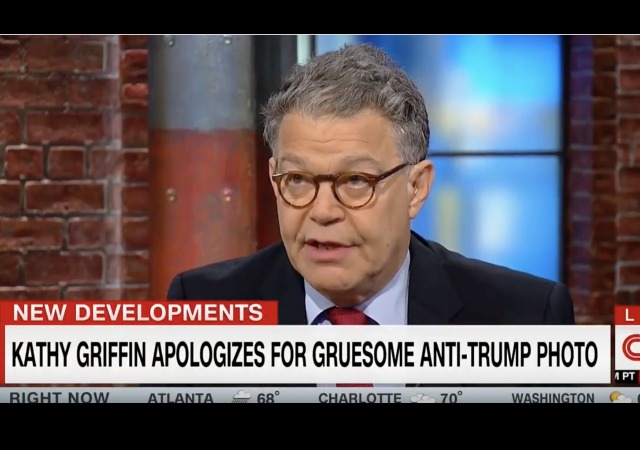 “CNN has terminated our agreement with Kathy Griffin to appear on our New Year’s Eve program,” CNN spokesman Shimrit Sheetrit confirmed to USA TODAY in a statement Wednesday.

Sen. Al Franken (D-MN) announced on CNN this morning that he will still participate in an event with Kathy Griffin, even after she posed with the bloody head of President Donald Trump. From CNN:

“Kathy’s a friend and she’s a terrific comedian, but this had no business being in our public discourse,” Franken said. “And I talked to her. She has apologized — a real, fulsome apology. She’s actually begged for forgiveness, and I believe in forgiveness.”

But Minnesota GOP Chairwoman Jennifer Carnahan has put pressure on Franken to cancel the event. 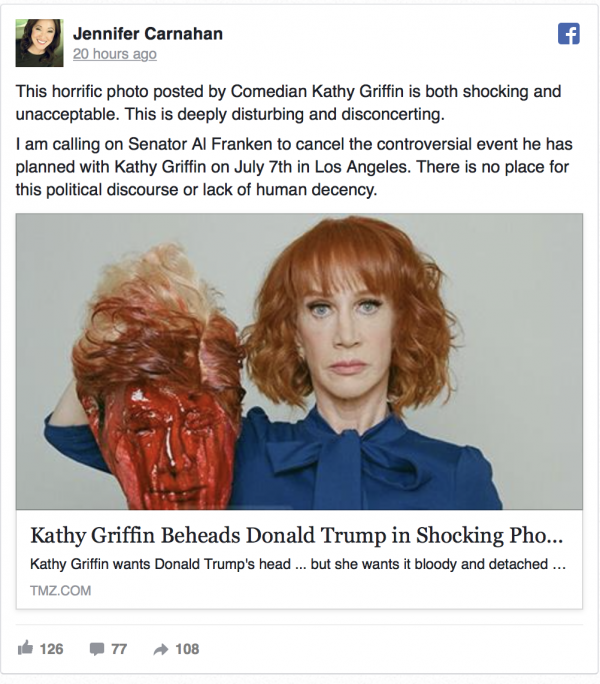 KARE 11 asked for a statement from Franken:

Sen. Franken thinks Kathy Griffin is a talented comedian and respects her right to free speech, but believes this image was inappropriate and not the kind of thing that should be part of our national discourse.

But do you remember this? Back in 2004, he told the sign-language interpreter for President George Bush at the GOP convention he should have signed out to al-Qaeda the best ways to sneak into the White House to kill the president.

Ed Morrissey at Hot Air blogged about it in 2008:

I can already hear the objections. Franken is a satirist! He was joking! He’s paid to make people laugh! Er, yeah … but then Franken was also a political commentator, and now he wants to serve in the US Senate, so his judgment in this is fair game. If he’s such a hater that the notion of AQ assassinating George Bush is funny, that shows just how far outside the mainstream Franken is, and how poor his judgment can be.

Does Franken really believe that joking about presidential assassinations is in good taste, ever? Because in a Barack Obama administration, I doubt that Franken’s allies will find it funny. Neither will I, or most everyone I know.

Don’t forget this gem. Madonna at that stupid Women’s March proclaiming her desire to blow up the White House:

Griffin did an apology video, which was good, but she failed to apologize directly to President Trump and his family.

Concerning Franken, all I can recall is that image of a grown man in diapers. Brain bleach isn’t working on that image.

One can find hateful and violent rhetoric from idiots on both sides of the aisle.

The difference is when it comes from the right, both conservatives and liberals condemn the morons and shun them.

However, when it comes from the left, these morons are either hired by msnbc or elected to office. ‘By any means necessary’ is dogma for the left, and that includes violence.

Can you cite to any hateful and violent rhetoric from the any ‘mainstream’ elements or actors on the right?

There is no parity on the right with the insanity and advocacy for violence of pelosi, maxine waters, kathy griffin, black lives matters, hillary clniton, etc.

Hateful and violent rhetoric is a monopoly of the left. It’s what makes them so much of a threat to our freedom and our way of life.

Wouldn’t want to forget the media organ-grinder monkey in-chief in all this:

Nah, give em 6 weeks and she will be back at CNN with her own program and a raise.

Because, doggone it, he likes her.

Griffin is just desperate for attention. A very sick woman. She’s got a kindred spirit in Franken.

We have to work on getting this guy voted out.

notamemberofanyorganizedpolicital in reply to TheFineReport.com. | May 31, 2017 at 7:27 pm

Franken says he will appear with her in July at some event. Today all of her gigs have been canceled by the hosts. Franken may be on the stage alone the way things are going now for this cancer.

Let me apologize in advance for this way, way off topic post. This story is just too way out there to demonstrate what progressives believe is real progress.

The city of Berkeley, California, faces numerous problems from anarchist running wild in the streets trashing businesses and private property; homelessness and tent cities; increasing crime from thugs from within and crossing over from neighboring Oakland; and violent protestors feeling free to bloody anyone with whom they disagree.

So, what does the Berkeley city council take up as its most pressing cause du jour to solve all these problems and more? The answer should be most obvious: BAN PLASTIC STRAWS

Don’t apologize for going ‘off topic’ – nothing is off-topic when it comes to disseminating news the corrupt American media tries to hide.

And Franken once assaulted a random member of a crowd who he perceived to be invading, not his personal space, but freedom of speech zone.

That diaper Franken is famous for once wearing was a prescient warning to the rest of us.

We’ve got to boot this guy from the senate – along with another diaper-wearer: McConnell.

Griffin demonstrates how the liberal left actually thinks. They will be closed mouth until the MSM won’t say anything about her actions.

How many conservatives or moderates have had their careers or lives ruined by saying something minor compared to this evil, savage woman? No apologies were allowed.

This is not her first vicious attack against the President, just one that has finally gone far enough to actually scare the MSM (at lease for a few days). Her false apology is meaningless.

According to Drudge, Mike Cernovich tweet out something conflating Griffin with the “Church of Satan”. THe Church of Satan tweeted back to keep them out of it.

Seems Kathy gets no sympathy from the devil.