One child was only 6 MONTHS OLD. 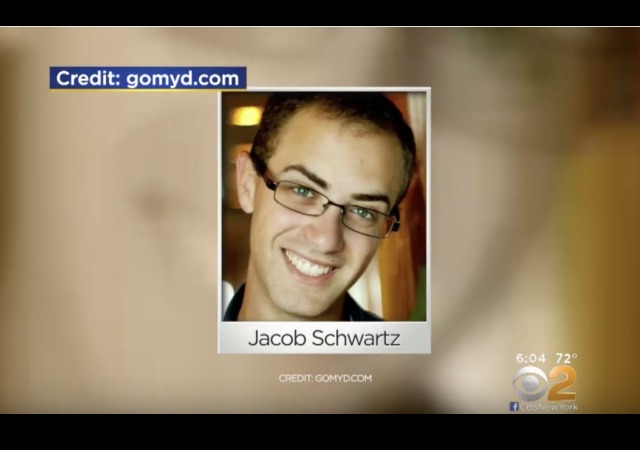 The NYPD Computer Crimes division began an investigation in March and Schwartz surrendered his computer. The detectives “found more than 3,000 images and 89 videos depicting girls as young as 6 months old performing sex acts on adult men.”

Authorities said Schwartz downloaded the material from the internet.

Schwartz had enjoyed a rise in New York City as a Democrat activist. From The New York Post:

But his name and photo were scrubbed from both groups’ Web sites after The Post broke the news of his arrest.

A statement from the Manhattan Young Democrats said the organization was “shocked” by the allegations against Schwartz, and added that he was “no longer a member of the board, and an interim president is now in place.”

A photo posted last year on Twitter shows him posing with Robby Mook, then the campaign manager for Hillary Clinton’s disastrous presidential campaign.

He “founded the New Democratic Alliance and worked for the Obama presidential campaign in 2012 as a field organizer in Lehigh Valley, Pa.” He also founded the nonprofit group Common Climate, which he served as the executive director of environmental education.

Schwartz worked as a “computer programmer analyst in the city Department of Design and Construction.” The department has terminated his access while City Hall and the Mayor’s office has denied a connection to him. From CBS New York:

“Obviously, these are extremely serious allegations. This is a junior-level agency employee with no connection to the Mayor or City Hall,” Mayor’s Office Deputy Press Secretary Melissa Grace said in a statement. “He is being terminated immediately, and the agency is cooperating with investigators.”

This story’s a nonting burger. There was no intent, and the children were all Russian agents who were out to entrap him.

By tomorrow he’ll be reported as president of the Young Republicans.

I have to think that the progressives’ rejection of ridicule of religion makes it much harder for their members to exercise any self-control over the worst parts of themselves and from what I’ve often seen, that deficiency is also passed onto their children as well. I’d be interested to see what kind of family he comes from.

This may be justified by a principle of social liberalism, but that would be a stretch. As it stands, the Democrat affiliation is incidental or unrelated to his orientation and behavior.

The left has a very big constituency of child molesters – it always has: the deal is the left will support the agenda of the child molesters in exchange for their political allegience. It’s surprising the molesters are so entrenched in NY, when we thought most of them run to the open arms of Hollywood and Brussels.

Compilation of Joe Biden being Creepy:

Roman Polanski a child molester is a hero and gets standing ovations at Hollywood events.

Plenty of gays are attracted to young boys, but then again, there is an epidemic of female teachers molesting young boys and girls.

We live in the American Weimar Republic created by the left, being undone by us and The Donald.

It seems the only society where child molesters face appropriate justice is in our prisons, at the hands of fellow inmates. But not in Hollywood or Brussels,where they are among kindred spirits.

Sex offenders are being killed off in California prisons:
http://www.businessinsider.com/sex-offenders-are-being-killed-off-in-california-prisons-2015-2

He was working hard for the Democrats hoping he would be invited to the Caribbean island where children were supplied for Bill Clinton and his criminal friends.

That’s how they reward their good child molesting soldiers.

Even J’Obiden has higher standards, as far as we know.

this is a sad commentary, that when a MOT does not have a full grounding in the Torah then they have nothing to fall back on when tests and trials come upon us.
Everyone gets tempted, but the Satan especially tries to entice us.

Anthony Weiner is another victim of this behavior.
I do say ‘victim’, even though they are willing vistims who in turn victimize others.

beware, we can all fall into traps.

Anyone who is sexually “tempted” by a 6-month old is beyond evil.

Where does he buy his pizza?

My thought, too. Is either Podesta connected to him?

Maybe he and Weiner can bunk together and share trade secrets with Jared Fogle.

Schwartz worked as a “computer programmer analyst in the city Department of Design and Construction.”

Set aside the “what” he did for the moment, and focus on the “how.”

From a functional standpoint, he either did something INCREDIBLY stupid (like made a purchase and download from a dealer with a credit card), he did some sort of direct IP download from a “honeypot” server without any type of masking (and thus has no business being called a programmer), he downloaded something planted with a “phone home and identify me” Trojan horse, or the Feds have come up with a way to directly trace a TOR Onion node chain (VERY unlikely).

Unfortunately MORONS like this guy are the “low hanging fruit” that make a big splash in the news, but are easy to catch because they have no security protocols. The manufacturers stick around because they’re appropriately paranoid, and thus communicate with high-grade, double-key nigh-unbreakable encryption, and post/trade/sell through TOR Onion nodes (the currently in-vogue term is “the Darknet”) that bounce transmissions through several unfriendly countries or off of several random TOR node computers.