Key to conflict: Arabs would have slaughtered the Jews en masse had Israel not won the war.

What is Nakba Day? Anti-Israel activist/writer Ben White describes it as the day “marking the ethnic cleansing of Palestinians that took place when the State of Israel was established.” 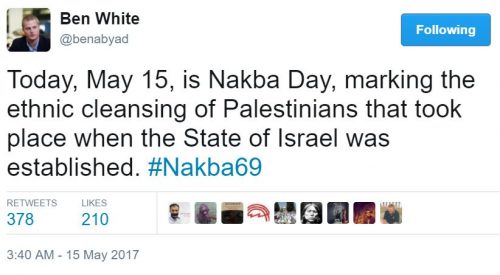 Propaganda outlets like AJ+, the viral video wing of Al Jazeera, are promoting Nakba Day with the symbol of a key that Arab refugees from the war will use to return to their homes.

The ? is a symbol of Palestinian exile. So these people made the world’s biggest key. #NakbaDay https://t.co/Jecus8UDKL

In reality, Nakba Day is a gross misrepresentation of history.

… it was of great interest for me to read An interview with Benny Morris by Prof. Gabriel Noah Brahm at Fathom Journal.  Morris is the “controversial” Israeli historian who first pissed off the “right wing” by questioning some of the foundational beliefs as to how Israel came into being, and then equally pissing off the left by focusing on the role of anti-Jewish hate in the Arab opposition to the creation of Israel.

Morris’ views were explaind in the Middle East Forum in this interview in 2010 Benny Morris: “The 1948 War Was an Islamic Holy War” (emphasis added):

Morris: What I discovered in the documentation relating to the war, at least from the Arab side, was that the war had a religious character, that the central element in the war was an imperative to launch jihad. There were other imperatives of course, political and others—but the most important from the enemy’s perspective was the element of the infidels who had the nerve to take control over sacred Muslim lands and the need to uproot them from there. The decisive majority in the Arab world saw the war first and foremost as a holy war, but until today historians have not examined the documentation that proves this. In my view, they have also ignored Arab rhetoric of the day, which universally included religious hatred against the Jews, because they thought the Arabs adopted this as normal speech that did not emanate from deep mental resources. They thought this was something superficial, that everyone talked like this. But I am positive the Arab spokesmen in 1948 did go beyond this and clearly and explicitly talked about jihad.

The claim that those Arabs who became refugees was the result of “ethnic cleansing” also is inaccurate, as Morris explains:

To the extent there was ethnic cleansing, it took place in the areas captured by Jordan (the “West Bank”), where all Jews were expelled, Jewish religious places vandalized and destroyed, and Jews forbidden to live. Even the ancient Jewish Mount of Olives cemetery was not spared:

On the Mount of Olives, the Jordanian Arabs removed 38,000 tombstones from the ancient cemetery and used them as paving stones for roads and as construction material in Jordanian Army camps, including use as latrines. When the area was recaptured by Israel in 1967, graves were found open with the bones scattered. Parts of the cemetery were converted into parking lots, a filling station, and an asphalt road was built to cut through it. The Intercontinental Hotel was built at the top of the cemetery. Sadar Khalil, appointed by the Jordanian government as the official caretaker of the cemetery, built his home on the grounds using the stones robbed from graves. In 1967, the press published extensive photos documenting that Jewish gravestones were found in Jordanian Army camps, such as El Azariya, as well as in Palestinian walkways, steps, bathrooms, and pavement.

Equally important, there were an equal number of Jewish refugees created, as we explained in The other Nakbah: The ethnic cleansing of Jews in the Arab world:

Approximately half of Israel’s current Jewish population are such Jewish refugees from Arab countries or their descendents. This exchange of populations goes unrecognized because Israel absorbed and welcomed its refugess, while Arab countries — long before there was a “Palestinian” national identity — kept the non-Jewish Arab refugees in separate camps and refused them and their descendents citizenship or other civil rights in many cases.

Prof. Miriam Elman exhaustively examined this ethnic cleansing of Jews in November 30: Commemorating departure and expulsion of Jews from Arab and Muslim lands.

So Nakba Day is a significant day, but not for the reasons the Israel haters say.

It’s a day to remember that the Arabs rejected the 1947 U.N. Partition proposal, waged Holy Jihad against the Jews, and would have slaughtered the Jews en masse had Israel not won the war. That lesson is the key to understanding the conflict.

Indeed, the key insight that so many people seem ignorant of is that the “Palestinian” cause is not like the Holocaust, it is a continuation of the Holocaust.

Just as, contrary to popular imagination, the Roman Empire did not end in the 4th century but lasted until 1453, so too Hitler’s conspiracy to wipe out the Jews did not end in 1945 but continues to this day. The Romans lost Rome, but continued in Byzantium; the Holocaust lost Germany but was continued by its Arab allies.

In 1948 this wasn’t even hidden; everyone understood that the Arabs of “Palestine”, led by Amin Husseini, had been Hitler’s allies and were continuing without him, and had they succeeded the history books today would have as a matter of course given the Holocaust’s dates as 1939-49. Thankfully they failed then, but they did not give up the fight, which was later led by Husseini’s nephew Arafat and now by Abbas.

How is it Regular Joe palestinian never trips to how foully he and his have been cynically manipulated and cruelly used? Seriously, how? They have cell phones, don’t they?

they are not ‘being used’, they hate the Jews because we show by our very existence that their ‘religion’ is a fantasy and falsehood of Amaleik of old.
The problem for Israelis is that most are not religious and have no understanding of biblical history. Until the Israelis start to understand that it is either them or us, they will still try to make peace with these animals of no conscience.

The Jews of Israel welcomed and accepted the Jews expelled from the Muslim world. The Muslims left the Palestinian Arabs stagnate in refugee camps for over half a century. No other refugee population has lasted for almost 70 years.

No other refugee population has lasted for almost 70 years.

Though the East Pakistani refugees in Bangladesh are getting there. 45 years and they’re still living in camps, hated by the Bengalis but unwanted by Pakistan.