“Republicans are not arguing the free market anymore” 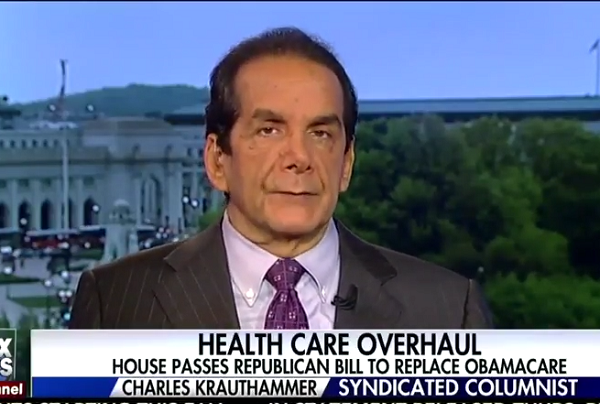 One of the frustrations of the GOP ObamaCare repeal and replace effort is that their offering neither repeals nor replaces ObamaCare.  While there are a range of reasons provided for the GOP’s inability to pass a wholesale repeal, one of the more alarming is that Americans have apparently decided that the federal government has an obligation to guarantee health insurance.

Because of this shift in Americans’ perception of the role of government in the healthcare industry, Charles Krauthammer predicts that we will have a single-payer system within seven years.

CHARLES KRAUTHAMMER: I think historically speaking we are at the midpoint. We had seven years of Obamacare, a change in expectations. And I would predict that in less than seven years, we will be in a single-payer system. I think that’s the great irony of this.

Obamacare failed at every level. Politically, the Democrats were crushed over six years and four elections, whereas you say, they lost seats in the House, the Senate, the governorships, etc. largely because of Obamacare.

It failed on the ground, as was pointed out earlier. The insurers are in a death spiral. The Obamacare exchanges are collapsing. You’ve had these exchanges, these community exchanges completely disintegrating. But the irony is in the end, I think Obamacare wins the day because it changed expectations.

Look at the terms of the debate. Republicans are not arguing the free market anymore. They have sort of accepted the fact that the electorate sees health care as not just any commodity. It’s not like purchasing a steak or a car. It is something people now have a sense that government ought to guarantee.

Krauthammer is an ass.

Krauthammer has been wrong about pretty much everything for the past few years. He’s wrong about this.

You may be right, Chessy (and snopercod), but I will not be in the least surprised if this particular prediction comes true.

ObamaCare was set up to do exactly what it’s done: 1.) shift voter thinking about health care (as a “right”) and about government’s role in same (as necessary to protect and guarantee that “right”) and 2.) act as a “starter home” for single-payer (as Tom Harkin said in 2011 and Obama repeated in 2016).

Well, it’s all gone. When do you hear any of that now? (Let me help you out: Never.)

That’s all gone. Those of us who still hate that whole idea have come to see that our fellow Americans are actually just fine with another entitlement, with the government controlling and, in some cases, replacing the free market health insurance industry. This shift is very very real, and it was very very much counted upon as Obama and his traitorous horde built a system, front-loading it with tons of “goodies,” that would never be undone.

Americans, much to my deepest regret and heartache, simply don’t retain the “old-fashioned” American values that (we think) made our country great.

ObamaCare was not the first or only indication of this enormous cultural shift, though it was an early one for me. As it became more and more clear that the vast majority of even the Tea Party Americans had no stomach for entitlement reform even though Medicare, Medicaid, and Social Security were bankrupting us, I started to understand that we’ve just fundamentally changed who we are as a people.

When my Tea Party friends started defending minimum wage hikes, propping up social security on the premise that we are “owed” it (even if they receive more than they ever paid in), and even supporting versions of “Medicare for all,” I was forced to see that I was dodo bird busily flapping my useless wings and fruitlessly trying to take flight.

Single-payer? I agree with Krauthammer, it’s right around the corner.

We’re not debating socialized medicine now: we are debating how much say the states have in the federal government’s control over our health care.

I have more faith in the good sense of Americans than you seem to.

What we have here is yet another battle between the urban welfare slugs and the rest of America.

I so hope I’m wrong and you’re right, Snopercod. Truly.