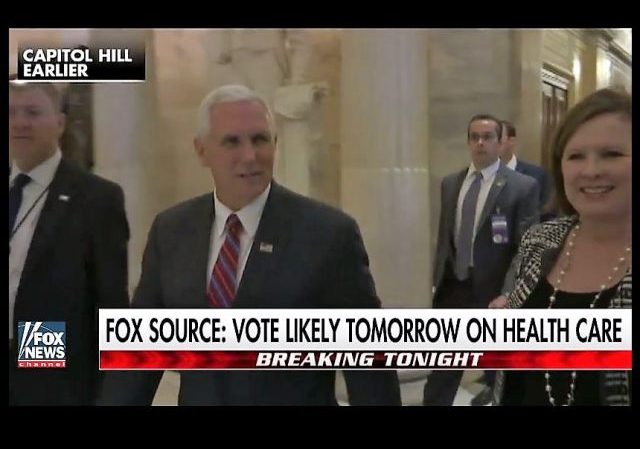 So, the breaking news is that the House will vote tomorrow, Thursday, the 4th day of May, in the year 2017, to “repeal and replace” Obamacare.

House Republican leaders planned to hold a showdown vote Thursday on their bill to repeal and replace large portions of the Affordable Care Act after adding $8 billion to the measure to help cover insurance costs for people with pre-existing conditions.

The amendment, drafted by Representative Fred Upton of Michigan, secured the support of Mr. Upton and of Representative Billy Long of Missouri, two key Republican lawmakers who had come out against the health care legislation earlier this week, warning that it did not do enough to protect the sick.

President Trump blessed the proposal at a White House meeting with both lawmakers ….

So is this for real?

First question, do they have the vote? CNN reports Republican leadership says they do:

“We will be voting on the health care votes tomorrow. Because we have enough votes. It’ll pass. It’s a good bill,” McCarthy, R-California, told reporters.

Except Majority Leader McCarthy told reporters tonight "we will pass this bill" and said "yes we do" have the votes. https://t.co/QneP1cfEXM

How is it different from the prior bill that failed?

Still trying to figure that out, other than more money for pre-existing conditions coverage. 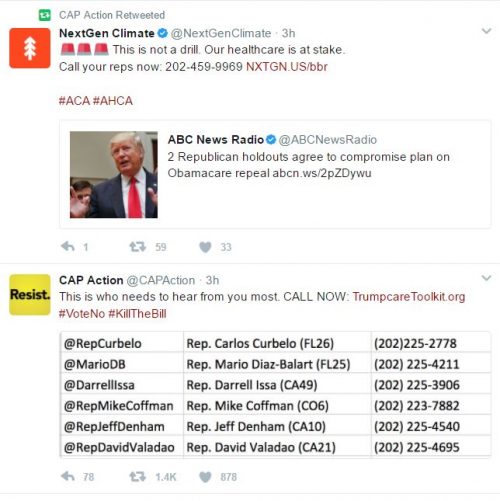 It takes more competence than what they show to make L/Cpl, but then a L/Cpl has responsibilities.

No confusion. This is deliberate.

1. announce bill to allow opposition to frame talking points
2. schedule vote on bill not scored by CBO
3. leadership portrays this a good but does not release details.

We are all being played.

Being played is correct.

The R party is the same as the D party.

They both do what the same group of masters tell them to do.

The handy dandy guide to failure, which is actually a guide to learning from failure, can be summed up as:

1. Failure to learn the lessons from the past.

2. Failure to adapt to changing conditions on the battlefield.

3. Failure to anticipate (foreseeable, I don’t mean failure to have a crystal ball) future enemy innovations.

A plan may survive one such strategic failure. It may, if the the enemy is especially incompetent, survive two. It can never survive all three.

But, hey, don’t let me bother you. Shouldn’t you be staring at one of the Kardashian sisters’ #%%?

It’s not sounding very repeal-y to me. More like renovate and redecorate.

May the Fourth be with them!

I thought it came by the fifth.

Are you speaking of amendments or whisky?

If that’s what you wanted to say I’m all for it. Let the Fourth be with you.

So, the House is going to vote on keep and tweak tomorrow. Whoopdy-doo

The GOPe is a dead political party – it’s just a home for Jebs! and the like. They have no base whatsoever.

Trump, while alone in D.C., has a base of millions of loyalists. The GOPe has ten rich guys.

Enough of these bastards. At some point, Trump should dump the party and form his own.

THIS. 1000 times this. Ready for the Deplorable Party.

People need to understand that the GOPe and Democrats are the same party!

The sooner you can accept this the sooner everyone can move on and start draining the swamp.

1) Why do I hear echoes of “we have to pass it to find out what is in it”?
2) Looking at the same group of traitorous buggers who just passed a Democrat Continuing Spending Resolution to maintain Obama’s priorities through a Republican Congress, I am not reassured.
3) I am so stealing “keep and tweak”.

I may be the odd man out here, but this deal may be the best we can get for now. I like the fact the the bill creates a fund which the states may use for the uninsurable, thus removing people with pre-existing conditions from the pool. That should lower rates for everybody else. I especially like the fact that the Republicans are respecting the idea of Federalism by letting the states set their own “essential benefits” insurance requirements if they want to. By not forcing people to buy insurance they don’t want, that should lower rates, too. I would vote for this today.

Is hypertension a preexisting condition? Hyperlipidemia? GERD?, and hundreds of other diagnoses listed in the ICD 10 books? I ask because I notice, in the course of my job, that everyone I see has a list that can be quite long called their past medical history. Along with the PMH, is a list of medications that give further insight to other aspects of preexisting conditions.

I am curious how this information will be treated by this grand “replace” plan. I am a believer that the market will iron out all of these questions, the congress critter plan, maybe not so much. Prior to the ever present computer records mandated by the federal government (which requires doctors and most everyone else in healthcare to become very expensive data entry clerks) insurance by private entities worked and was affordable to those seeking that protection. I would like to see that type of model again.

A federally-created fund (our tax money) that can be pulled from for various things is never a good idea.

They ran on “REPEAL”.

That is not too great a promise to deliver on.

Odd that people are savaging (rightly) Congressional quislings, but totally ignoring Mr. Establishment’s support of this betrayal, as they did with his support of the spending bill.

Now I’ll be subjected to Soviet style ThoughtPolicing by the T-rump suckers.

Oh, and tsk, tsk, Prof. You pulled reporting from the NYT and CNN. According to the liars’ chorus, even reading from this is a sin. But they’re idiots…

This reminds me of the movie Groundhog Day. A person finds himself caught in a time loop, repeating the same day again and again.

The republicans are making the same mistakes that the democrats did just a few years ago. Guess they will be able to crow we repealed Obamacare but then what?

It better cost less, cover preexisting conditions or it’s going to be a massive slaughter in 2018 elections!

Why will they replace Obamacare with a slightly changed Obamacare? Isn’t it easier to just change Obamacare and keep the name? Or if they want to change the name, call it CommunityOrganizerCare.

There is an old saying of “Don’t try to take food away from a big dog while he is eating”. Taking back ANY perk from our society is just as bad and these slimy Congress critters know this. Once obamacare became law and the line formed at the dole office, it became written in stone that the “People” deserved this new perk. All of the normal people who had their premiums double or triple are not considered in this issue. This is only for the “Poor”. Trump has always negotiated with the profit motive and so did his counterpart. But trying to deal with Congress is a whole new ballgame for Trump. His usual threats and promises don’t seem to be working for him. As exasperating as this is to us, we have to realize that it is a VERY complex issue and will not be solved in a five-page bill.

Pretty sure the bill signed by House and Senate and put on Obama’s desk in January 2016 was a one page bill. Why we can’t get that one now is baffling.

Politics. The bill which was vetoed by Obama was pure theater. The Republicans knew it would be vetoed. They knew they did not have the votes to override the veto. So, it was politically safe to pass a repeal bill which they knew was never going to be signed into law.

Everyone here has to understand the political realities of repealing Obamacare. If the ACA is repealed, or even significantly reduced in scope, millions of people will lose their health insurance and, due to the incredibly high cost of medical care itself, millions will suffer. This translates into politicians losing their office in the next election. So, either this bill will simply die, before the midterms, or it will be so watered down so as to make no appreciable difference to the consumer at all, in the long run. The problem has never been the cost of health insurance. It has always been the cost of healthcare. And, that is not addressed in the ACA or this bill at all.

Repeal was what was promised for years and years. Repeal and replace has become all the rage in the past few months. Why the sudden change of heart?

This is not the final bill. This is the *House* attempt. Even if this passes the House, it will go off to the Senate and get *totally* rewritten. Then it goes to a conference committee, at which point it gets totally rewritten again. This third stage is where the rubber hits the road, and where the Trump administration will/should be spending the vast majority of their efforts.

To top it off, the whole bill will have to be built and edited by only the Republicans. The Dems *might* have a few contributions because good ideas are good ideas no matter who comes up with them, but the Dems are going to be monolithic in their voting opposition, and there is *no* benefit to adding Democrat amendments which do not have overwhelming Republican support.