Obama tells Berlin, “We can’t hide behind a wall” 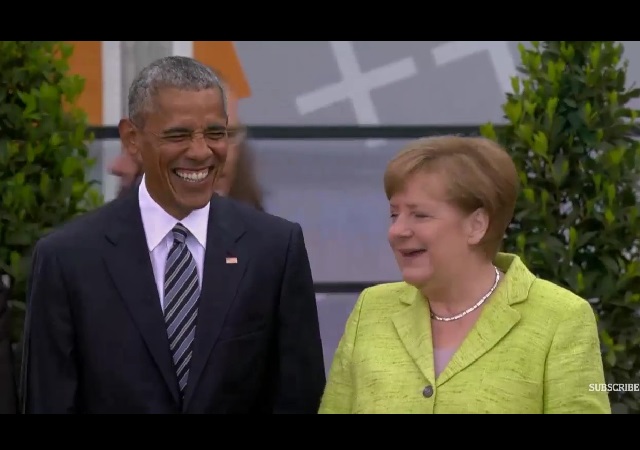 While President Donald Trump had a busy day getting all the 28 NATO partners on board the global anti-ISIS alliance, former President Barak Obama appeared at a youth rally in Berlin alongside German Chancellor Angela Merkel. The event in Berlin was organised to mark the 500th anniversary of the Protestant Reformation.

Taking a swipe at his successor’s immigration policy, Obama got cheers from audiences in Berlin with meaningless platitudes like “we can’t hide behind a wall.” Yes, Obama decried walls as he sat fenced behind a security cover with “helicopters patrol[ling] the skies and snipers with balaclavas watch[ing] the scene from nearby rooftops” — as one news-outlet described it.

Around 70,000 people showed up for a public discussion between former US President Barak Obama and Chancellor Merkel. Obama received a cheerful reception on arrival. (…)

[Obama] indirectly distanced himself from Donald Trump with an urgent plea for civil rights and solving conflicts through diplomacy. He, however, did not mention his successor by name during his highly anticipated appearance at the Lutheran Convention in Berlin. [Author’s translation]

Obama praised Merkel’s “outstanding work” as they both took part in the discussion near Berlin’s Brandenburg Gate. “Chancellor Merkel has done outstanding work, not just here in Germany, but around the world,” Obama said.

The Obama-Merkel love-fest went on for an hour. “Not only do I love this city, but one of my favourite partners throughout my presidency is sitting next to me,” Obama declared, making Merkel almost blush.

According to the organisers, more than 100,000 worshippers attended three open-air services to mark this year’s Protestant gathering in Berlin. The convention was not without its share of controversy. At one of the events, Berlin’s Bishop Markus Dröge attacked the right-wing AfD party. AfD spokesperson responded by accusing Germany’s Protestant church, which also receives government-funding, of acting like “an arm of the leftist parties,” German newspaper Bild reported.

Meanwhile in Brussels, President Trump met with the leaders of the EU member state for the first time. He appears to have succeeded in forging a multinational anti-ISIS alliance, a promise he made during the presidential campaign. German media reports indicate that most of the NATO member states have agreed to meet their membership obligations, pledging to contribute 2 percent of the national GDP — something President Trump has been urging NATO partners to do. European member states may still not be willing to pay their outstanding dues.

France and Germany, however, might corner U.S. President on the issue of climate change. “European leaders have promised to pressure” President Trump “on the need to maintain a united front in the fight against global warming,” France24 noted. On Tuesday, Chancellor Merkel and China’s climate tzar, Xie Zhenhua, urged the U.S. “to stay the course” following an international climate talk in Berlin.

Video: ‘We can’t hide behind a wall’ Obama tells Berlin

“We can’t hide behind a wall…”

The first renovation this hypocrite built for his Washington mansion was….a wall.

Obama’s going to make Jimmy look like a shut-in.

I doubt Carter would have considered something so inappropriate.

tell the tchermands to take of their own damn defense –
pay up or shut up.

she is going to have a Muslim majority – they are not reproducing and screwing themselves…..

So cut them loose. This is probably why Trump is making formal demands they won’t meet. So he has a formal reason to end our participation in NATO.

What do we lose? These countries have ruined themselves, not worth defending any more.

Well his entire presidency is going to be considered a sideshow of history, so this kind of fits.

One need not look to Webster’s big book to define the word “Odious”. What a classless narcissist! Can’t he see what damage he did to the world in his eight years? Every region is in turmoil and conflict. Global stability is in shambles and this fool is giving advice? And look who he is giving it to. The moron who INVITED over a million muslim men under thirty years of age from tribal Africa and the Middle East to come and live among civilized people. We know how that worked out.

Did you know that the UK’s Prince Charles fired his chef because he is very finicky about how his food is prepared? No? Neither did I but that appeared on pg. 2 of today’s San Jose Mercury News.

I do not understand this fascination with the private lives of British royalty. The Queen is the nominal head of state and what she does in that capacity is newsworthy as are the actions of any other head of state. This story about about Gianforte appeared on page 6. The first mention of Trump meeting with the Pope was on page 9 after the page 8 continuation of the page 1 article on how the AHCA will cause 23 million to lose health insurance.

Several days ago the same paper ran a brief, and I mean brief, story on Trump’s address to the fifty heads of states of Muslim countries. One had to dig deep into the paper even to find this account of this highly newsworthy on a global scale event.

The fascination with British royalty continued with a story on Pippa Middleton’s wedding. It appears that more print was devoted to Pippa than to Trump’s address. Pippa also was apparently worthier of a larger picture and, of course, the story on Pippa appeared first.

If there was in that daily edition any mention of Trump’s upcoming itinerary concerning NATO, the EU and the Pope it must have been so well buried that I could not find it. More likely, it just wasn’t there.

Seriously, Trump’s new Muslim coalition against terror is a groundbreaking historic achievement. It wasn’t even covered heavily in the mainstream press? I didn’t realize it because I don’t look at those papers.

Close them down, they’re not news, they’re pure propaganda.

I wonder if it’s possible to axe Obama’s very expensive freebies under the Former Presidents Act if he doesn’t behave like a proper Former President, but some sort of D-list Shadow President-Wannabe.

Why President Trump can just “Executive Order” it all to end.

Wouldn’t that be sweet.

End it all for Carter, Bushes, and Clintons…….

We need to end Obama’s elective wars that forced immigration reform (a.k.a. refugee crises) from Africa to the Middle East to Eastern Europe.

Why does Obama, and Merkel, too, oppose emigration reform?

Do they share a common empathy because of the violent coup they backed in Ukraine, only to have their refugee crisis cut short through Russian intervention (a la Syria)?

Their anti-nativism is stark as they bitterly cling to dreams of [class] diversity and population control… controlling populations.

Obama at his home in the US: “Build that wall taller, and cover it with sensors. I don’t want anybody getting into my house.”

“We can’t hide behind a wall” said the narcissistic hypocrite who just rented a house in D.C. and then promptly had a wall built around it.

All that’s missing is the weasel picking his nose:

Is Merkel that stupid that she doesn’t know that the community organizer in chiefs in no longer the president?

Obama always used sanctimonious “presidential-sounding” claptrap to justify doing nothing to protect us against terrorists.

The media organ-grinders and their trained monkey, Barack.

I know Obama’s motivation: he wants to help Islam conquer the world. I don’t understand Merkel’s. Surely she doesn’t believe that the Muslims won’t execute her once they’ve taken Germany (and the rest of Europe). Unless, of course, she’s already converted to Islam and her non-Muslim appearance is taqiyya.

notamemberofanyorganizedpolicital in reply to randian. | May 26, 2017 at 3:44 pm

Merkel’s just hoping to increase the odds of her getting a date on Saturday night……..

Much more relevant would be visiting a modern city with historical defensive walls. Which cities had walls? Basically all of them. Babylon, Alexandria, Athens, London, Rome, Paris, etc etc. If you couldn’t keep people you didn’t want out, then you didn’t really control your own city. Some things don”t really change.

Gathering of the clueless.

Were they there to worship God, their Protestant selves or Obama? I’m betting it’s the latter.

I wonder how much that little Obama love fest/photo op cost Germany?

It gave Trump an opportunity to do a good thing. Buy an American with a V-8 rather than spending the same or more on a German car with a turbocharged 4 banger.

How incredibly inappropriate. Obama has no official responsibility and can be any kind of an azz he wants to I guess.

But for Merkel to shun the current President in favor of the old one she liked better, well that’s got a cost.

The cost will be the German auto industry, to judge by Trump’s remarks. Good. Germany’s lost anyway.