…while leftists in the capitol protested Trump instead of ISIS…. 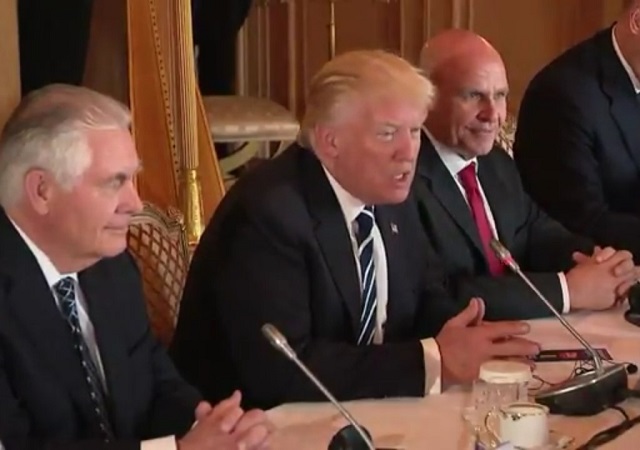 President Donald Trump seems to have achieved a significant foreign policy aim ahead of his meeting with the leaders of 28 NATO member states. According to the reports in German media, France and Germany have formally agreed to join the US-led coalition against the Islamic State. “After sustained pressure from Washington, NATO will be joining the international coalition,” German newspaper Stuttgarter Zeitung wrote. Other reports suggest that Manchester’s deadly terror attack, for which ISIS claimed responsibility, may have played a role in convincing Germany and France in joining the global alliance to destroy the Islamist terror group.

Despite Germany’s consent, there is trouble brewing in Merkel’s camp. Her second-in-command, German Vice Chancellor and Foreign Minister Sigmar Gabriel, has placed conditions on the proposed alliance, telling reporters that “combat operations were not part of NATO agreement. [NATO] is a defense alliance.”

Gabriel’s statement claiming NATO solely being a defense alliance is factually incorrect. German troops under NATO command have taken part in military campaigns against Serbia as well as in Afghanistan and Libya.

“No one has anything against training missions as they are being carried out till date, but we regard the entry of NATO in armed conflict as a totally wrong signal.” As it might create an impression that the West is fighting against a part of Islamic world, Gabriel said. [Author’s translation]

And we thought Islam had nothing to do with ISIS, Herr Gabriel!

Meanwhile, Trump’s arrival triggered a massive demonstration in the Belgian capital yesterday, with thousands of angry protesters marching in Brussels. Trump didn’t seem perturbed by these grown-up ‘pussy hat’ marchers and tweeted: “Thank you for the warm welcome to Brussels, Belgium this afternoon!”

German public broadcaster Deutsche Welle covered the anti-Trump protests in Brussels that were initially called by a group of leftwing Belgian students, who described their demonstration as “struggle against sexism, racism and discrimination”:

[President Trump’s] arrival was marked by 9,000 people marching through the city with “Trump not welcome” placards. (…)

Ten-year-old Inka Spannagle was with her mom and little brother wearing a “Stop Trump: Save the Planet” button. Asked why she felt the need to protest Trump, the youngster said bluntly: “He hates women and he wants to build a wall with Mexico.”  Her 7-year-old brother added that he was afraid the US president “would do more bad stuff.” Their mother, Jits Gysen, said she wanted European politicians to see there was a groundswell of dissatisfaction with such politics and a need to change course from populist politicians.

According to the German broadcaster, an alliance of “70 NGOs” has sponsored the anti-Trump march “on issues ranging from climate change to pension reform.”

What this confused bunch of left-wing crybabies in Europe doesn’t understand is that Trump poses no threat to their liberal bubbles or their lifestyles, but the growing threat of political Islam certainly does. By towing the Trojan Horse of Jihad under the banner of “Open Borders” in Europe and silencing those who dare to speak the truth about Islamism, they are acting as the useful idiots for the worldwide Jihad.

They are not waging a ‘revolutionary struggle’ against racism, gender disparity or any other real or imagined injustice — as they keep on endlessly purporting. But are waging a war on common sense itself, and as it appears from where I am sitting in Europe, they seem be winning it.

Video: President Trump participates in a bilateral meeting with Prime Minister of Belgium

[Image courtesy Whitehouse, YouTube]
[The writer is a current affairs analyst based in Germany]

It’s a shame we have such a buffoon in the White House, rather than the experienced and fully credentialed former secretary of state he was running against. Just think how much more she could be accomplishing to advance America’s interests abroad.

Yeahm that “experienced and fully former credentialed secretary of state” did a really bang-up job in Syria, Iraq, and Libya….when she wasn’t also busy hiding her e-mails and running her pay-for-play racket out of her office.

But she had to excel with her edijamication. She wuz a Roads skoler. She really needs an advanced degree in crime tat she can only get from being confined with other thieves.

Lock her up! (and hang the creep she was working for()

It’s about time to confront the fallout from Obama’s premature evacuation and subsequent elective wars from Africa to the Middle East to Eastern Europe, and end immigration reform (a.k.a. refugee crises). People should not be the object of redistributive change.