“Those who fail our veterans will be held, for the first time, accountable.” 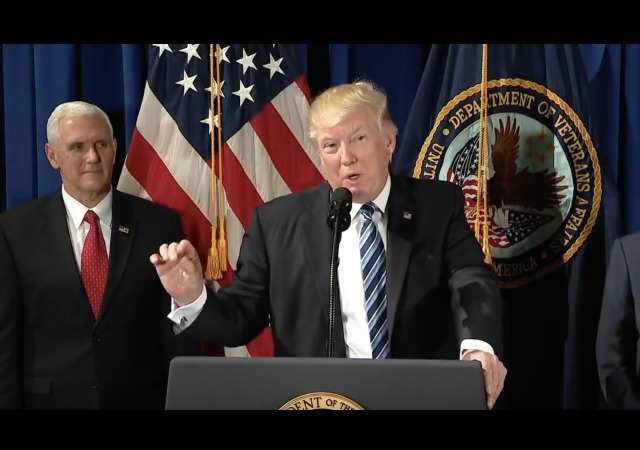 The Department of Veterans Affairs (VA) has faced scandal after scandal, some of which caused veterans to die while waiting for care. There was even a dentist putting veterans at risk for HIV.

But the VA has also punished those who blow the whistle on VA wrong doings.

President Trump took a step in the right direction to fix these problems when he signed an executive order that creates the “Office of Accountability and Whistleblower Protection” at the VA.

“With the creation of this office, we are sending a strong message: those who fail our veterans will be held, for the first time, accountable,” Trump said during a signing ceremony at the VA headquarters, flanked by Vice President Mike Pence and VA Secretary David Shulkin.

But he also called on the Senate to pass pending accountability legislation, already approved by the House, that would give Shulkin more authority to remove low-performing employees or those accused of misconduct.

Trump also promised to provide the “veterans with the ‘health care they need and the health care they deserve.'” He promised his administration will not “let them down” and “never tolerate substandard care for our great veterans.”

Some of the whistleblowers have expressed skepticism, though. You cannot blame them considering the way the VA has treated them.

Germaine Clarno spoke out about abuses at the Hines Veterans Affairs Hospital in Illinois a few weeks before the damning Phoenix report. She said the hospital kept “secret lists that hide the truth about how long veterans are waiting to receive the health care they need.” Clarno continues to speak out for the whistleblowers, but will not celebrate anything until she sees action. From USA Today:

“You can put together any office, pass legislation and put in place executive orders, but until whistle-blowers are honored and recognized for their courage and dedication nothing will be considered authentic,” she said.

Kuauhtemoc Rodriguez, who brought attention to the Phoenix VA scandal in 2014 that left veterans dead stated that retaliation is still happening:

“I doubt the presidential order will curb the abuse happening at the Phoenix VA or any other VA,” he said.

The VA in Tomah, WI, became known as “candy land” because doctors passed around medicine so freely. The HR manager at the hospital stripped Ryan Honl “of his job duties” and locked him out of the office “a day after he reported fraud and other problems.” He also wants action instead of words:

“Until there are concrete changes all the way down the chain of command at VA hospitals,” Honl told USA TODAY, “it’s all hot air.”

Whistleblower Brandon Coleman did attend the signing with Trump. He spoke out about the “lapses in care of mental health patients at the Phoenix VA in 2015.” The VA also retaliated against him. He told USA Today:

“For this new whistle-blower division to be successful within the VA, it is important that whistle-blowers are included,” Coleman told USA TODAY. “We are the only ones who were telling the truth about wait times, lack of care for suicidal vets and other issues over the past three years. We are a valuable resource and know firsthand what happens within the VA to us for simply telling the truth.”

I know I’ve listed the scandals before, but it’s so important to remember them.

Rodriguez and others alerted officials that the VA participated in “an elaborate scheme” to hide the fact that between “1,400 to 1,600 sick veterans were forced to wait months to see a doctor.” The waiting lists caused 40 veterans to die as they waited to see a doctor. CNN reported:

Dr. Sam Foote just retired after spending 24 years with the VA system in Phoenix. The veteran doctor told CNN in an exclusive interview that the Phoenix VA works off two lists for patient appointments:

There’s an “official” list that’s shared with officials in Washington and shows the VA has been providing timely appointments, which Foote calls a sham list. And then there’s the real list that’s hidden from outsiders, where wait times can last more than a year.

You can read more about the scheme at CNN.

In March, the inspector general found that officials have not made the necessary changes to the suicide hotline for veterans. The office found these problems last year and the VA promised changes would come by the end of September. Officials had not done anything by December.

The Durham VA in Durham came under fire when Marine veteran Stephen McMenamin and his wife Hanna posted photos on Facebook of veterans lying on the floor and witnessed employees ignoring those in pain:

“It was very upsetting,” Stephen McMenamin said. He and his wife said they saw a handful of older veterans mistreated and ignored during the seven hours they were at the hospital, including an aged-veteran in a wheelchair.

“He had been sitting there for quite some time groaning and convulsing in pain,” McMenamin said. “Almost to the point of where he was falling out of his wheelchair.”

“He was visibly in pain,” said Hanna. “And I think the thing with that that disturbed me so much was that there were people just sitting there acting like nothing was happening and he was sitting right in front of them and they were not even acknowledging that it was happening.”

This is a situation I can’t understand. Who is the constituency benefiting from all of this corruption? It’s almost always about special interests who buy politicians who then appoint corrupt administrators. Who is the special interest in this case? Why is this so hard to fix?

The constituency, in this instance, is the layers of management who have developed a need to protect themselves from scrutiny and accountability.

So who is protecting them? These guys get entrenched via political appointments that have to be approved by Congress. What has been the incentive for politicians, from the president on down, to not appoint someone who will clean this up? No one in the bureaucracy is safe from Congress or the candidates they approve. Bush said he would clean it up but it actually got much worse under his administration.

At the administrative levels we are talking about, the bureaucrats are strong democrat supporters. Also, the SEIU can stick their noses into the issue as well, but mostly it’s the bureaucracy protecting the bureaucracy.

Don’t forget about the bureaucracy/unions that are protecting the workers from being fired. I would imagine any good health care workers are quickly frustrated and move to other facilities.

notamemberofanyorganizedpolicital in reply to Pasadena Phil. | April 28, 2017 at 11:55 am

It’s all the VA employees who benefit from the corruption.

They stick the funds into their own pay, i.e., salaries, benefits,
employment perks such as convention travel, new office furniture, etc. etc.

They have to be busted and the murder prosecutions brought against them.

Pasadena Phil in reply to notamemberofanyorganizedpolicital. | April 28, 2017 at 12:02 pm

That is true of everybody but you can’t protect yourself. Someone is protecting them from the top down. Who and why?

They’ll find a fired health care worker who will just cry about how they are supporting five kids, have health issues themselves and really need that job and they didn’t do anything wrong.

And they’ll make it an illegal alien one from some sanctuary city too……..

Here is the link to the EO – https://www.whitehouse.gov/the-press-office/2017/04/27/presidential-executive-order-improving-accountability-and-whistleblower

Key points:
1. Establishes the Office & hire a Special Assistant/Executive Director who reports directly to the Secretary. This is to happen within 45 days.
2. To the extent permitted by law – assist the Secretary in disciplining or terminating any VA manager or employee as well as identifying statutory barriers to the authority to identify the “need for legislative changes”. The EO also mentions the need to recruit, reward and retain high performing employees.
3.Work to resolve complaints of wrongdoing and protect those who lawfully disclose wrongdoing.
4. Even though the EO establishes a new office, the Secretary has to consider if other parts of the VA are performing the same functions and whether combining the new office with a current program may improve efficiency and effectiveness.

That’s one way to drain the swamp – create a new office, tell it to kick butt and then identify those who were supposed to be doing these things and eliminate them. Easier than trying to work from within the current structure.

There is only one deadline – the 45 days to set up the office. Unlike the other EOs, there is no deadline to “review & report”.

When the firings begin let me know.

Exactly. This has been going on for decades now. Bush’s purported efforts to clean it up actually left the VA in worse shape.

Under Governor McAuliffe, the headline can take on a whole new meaning!

But hey…. single payer is going to be wonderful!

It will be the VA on steroids.

I’ll believe it when people are fired and thrown in jail for their willful neglect causing preventable deaths.

Until then its just words.

Get rid of the VA, and fund soldiers’ private insurance instead.