Patients in horrific pain left to suffer in the waiting room. 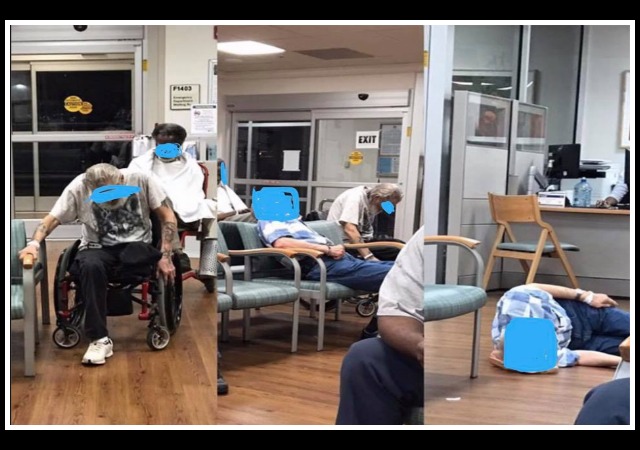 The Durham VA in North Carolina has come under fire after photos appeared on Facebook of patients left lying on the floor. Marine veteran Stephen McMenamin and his wife Hanna could not believe what they saw in the waiting room:

“It was very upsetting,” Stephen McMenamin said. He and his wife said they saw a handful of older veterans mistreated and ignored during the seven hours they were at the hospital, including an aged-veteran in a wheelchair.

“He had been sitting there for quite some time groaning and convulsing in pain,” McMenamin said. “Almost to the point of where he was falling out of his wheelchair.”

“He was visibly in pain,” said Hanna. “And I think the thing with that that disturbed me so much was that there were people just sitting there acting like nothing was happening and he was sitting right in front of them and they were not even acknowledging that it was happening.”

The McMenamins and others asked the staff to help the man, but everyone asked said no. McMenamin finally gave the man the wheelchair he had, but a nurse quickly acted:

“He sat in it for probably 15 minutes until the head nurse came around and kicked him out and said he can’t do that, he can’t be in that area. She was very rough with him and just completely insensitive,” he said.

Another man who could not get comfortable in the waiting room caught the couple’s attention. He finally gave up and lied down on the floor:

“He just kind of laid down and said, ‘I can’t get up, I won’t get up. Please get me a blanket until you can see me.’ ” McMenamin says security guards helped the man up after about five minutes and he was taken out of the waiting room.

“It’s just horrible sitting in a room like that with people who could have been my grandfather,” Hanna added, “in that much pain and having people not even react, it seemed like.

“The majority of the people working there were very nice to us. They were great,” she added. “It’s just that you have these people that don’t care it seems like, and from what I’ve read from the comments, this is happening all over the place. You get people that just don’t care for what they’re doing and they feel like they can’t be fired, so they just kind of get away with it. I just think it’s unacceptable.”

Vietnam veteran Jesse Lee told WRAL that he is the man in the wheelchair. He visited the VA for phantom pains he has experienced after doctors amputated his leg:

“Somebody in real bad pain should be seen,” Lee said. “It felt like a railroad spike was going through my foot. It’s like one of the worst pains you’ve ever felt in your life.”

Lee said he was in pain for several hours before he was seen. McMenamin said the problem was with one particular VA nurse who appeared to essentially ignore the pleas from patients.

Lee also said that he asked the employees numerous times if anyone could help them and all said he had to wait.

DeAnne Seekins, Director of the Durham VA, stated that the pictures are very misleading. She claimed the employees checked the surveillance videos from that night and everything checked out. She said that the veterans received the help they needed and “given extra care.”

However, Seekins would not hand over the tapes to CBS North Carolina when asked.

Seekins admitted the VA had a very busy night, but every single veteran was “triaged and treated based on the severity of their illness.”

The director also said that two of the veterans did not appreciate their photos posted on Facebook and asked the McMenamins to remove the photos. The veteran lying on the floor even apologized for his actions.

But the McMenamins “stand by their post” and said “the veteran who was slumped in his wheelchair supports their efforts and was suffering major pain while waiting.”

Some of those career bureaucrats need to go to jail.

While I hate to promote the size of any government program, I think it would be helpful if all federal employees were required to use the VA for ALL of their medical needs. No rank and job title on the VA id card, just a VA card and your number. People would not know if you are the senior senator from California or a Pvt that lost a foot in some foolish war in some foolish country for some foolish reason the senior Senator from Washington State voted for.

If elected officials of the US government had to use the VA healthcare system it would be the best. The slime that we send to Congress each term is sickening when their biggest fear is not being re-elected. But the men and women at the VA have faced death and dismemberment. Who deserves our best?

Mean while, no good, useless, lazy people get free quality welfare from food stamps and paid mortgages to free cell phones and healthcare.

Si, but I get on da bus and go wit da man and vote when he tell me.

And all this got much worse during 8 years under Obama. And it was all ignored.

This is Obama’s legacy of ‘veterancare.’

And Obamacare for the rest of us.

It’s important to remember only the swine congress, the president and a certain auto union are exempt from Obamacare.

Ok, clearly none of us were there, but, I am a nurse that has worked in detox for chemical abuse and even without reading the Dx of the Vietnam Vet, I had a feeling this was an act to get opioids. I have seen this, and worse, over my career and in fact you have to ignore these people. They will flop around the floor, scream, cry, moan, and if successful, given day two narco by a foolish Resident, within 30 seconds they are laughing and skipping down the hall.
Now I don’t know if this what was happening here, but it happens everyday, over and over in every ER, hospital floor, clinic and Drs office. The nurse may have been implementing a very good treatment plan when it came to this gentleman which if you didn’t know what was going on would seem to on lookers as if you were incompetent or mean.
Just thought I would throw that out there.

With due respect of your qualifications to speak on this subject, I want to point out the use of opioids or any prex meds by patients who are within a qualified current VA status earned over the previous 20 yrs. or Viet Nam Vets who would have been previously qualified in the previous 40 yrs. or have aged into their eligibility. They are at a much higher risk and more than likely to suffer from issues related to prior service related injuries or have aged in with related deteriorating health issues making them an exception to the norm of most walk-in/emergency medical services. The odds of having a health issue raises significantly as opposed to being a non-medical addiction problem. Even if it were to be an addiction problem as a result of prior opioids usage for pain, the suffering of any sever pain should be triaged as a priority. The issue of why the pain, then should be dealt with the same serious priority by their Doctors. Both areas,cause and effect, are sorely missing by the triage staff and therefore passed onto the Doctors made available to diagnose and treat. The care depicted to these veterans seem to be the norm at VA centers. Our Vets deserve better quality of life.

Just as an add on; you’re experiences seem to replicate that of the attending head nurse who showed no compassion and showed the man out the door. Not everyone is geared to work with the sick and elderly. The difference between being a nurse at a nursing home as opposed to doctors office. Certification does not equal Qualification.