‘The left doesn’t want to win the debate, they want to cancel the debate’

‘The left doesn’t want to win the debate, they want to cancel the debate’ 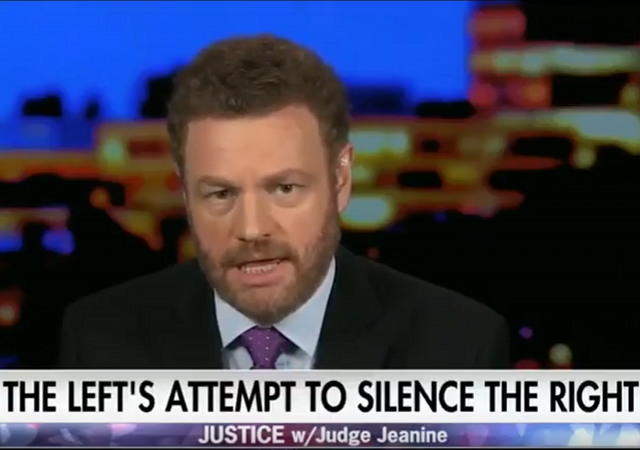 Conservative author and pundit Mark Steyn was on the Judge Jeanine show this weekend where he discussed the silencing of certain speakers on college campuses.

Recent incidents at Middlebury College and Claremont McKenna College show that this problem not only exists but is getting worse.

Steyn correctly points out that this is a completely intentional strategy on the part of the left to end the debate, especially on subjects for which progressives believe there is only one correct position; Gay marriage, climate change, Islam, etc.

Steyn also notes that this same brand of leftism believes in every form of diversity except diversity of opinion.

Steyn wrote about this media appearance on his website and used it as an opportunity to address the suspension of Ayaan Hirsi Ali’s speaking tour in Australia.

Over the weekend, I swung by Judge Jeanine’s show to talk about one of the most malign trends of our time: the ever more open refusal by one side to permit those on the other side to speak. As I always say, I don’t care what side you pick on the great questions of the age – climate change, gay marriage, Islam, transgendered bathrooms, whatever – but, if you’re on the side that says the other guy isn’t entitled to a side, you’re on the wrong side…

They don’t want to participate in the debate, and win it. It’s easier to shut it down and save themselves the trouble. Case in point:

Let’s just expand that “Somali-born activist” précis a little. She’s not a dead white male like me or Charles Murray. As someone once said, Ayaan Hirsi Ali is everything the identity-group fetishists profess to dig: female, atheist, black, immigrant. But, because she does not toe the party line on Islam, her blackness washes off her like a bad dye job on a telly anchorman – and so do her femaleness and godlessness and immigrant status. And in the end she is Charles Murray, or Geert Wilders – or even David Duke. A black Somali woman is, it turns out, a “white supremacist”.

Arguing with liberals is like playing chess with a pigeon. They’re going to knock over all the pieces, crap on everything and then strut around preening about how they won.

Because they play to win.

It’s probably worse than that because the ‘media’ (why does CNN still play in every airport???) always attach some little lie at the end of the sentence like “Heather Mac Donald speech ended by police order” or “Hirsi Ali tour ended because ‘some people say’ she’s a white supremacist”.

The carefully crafted plan is to make sure every speaker is made to look like the culprit, and the violent left is simply making sure the speakers don’t corrupt snowflake minds.

The United incident proves that lots of people with cameras and internet access can mitigate this to some degree. Plenty of real live footage shown to the entire country can certainly help, and we need to encourage these fine ladies and gentlemen to keep speaking, that we’ll have their backs. Or…

When the leftists block or break the cameras, denying EVERYONE’S 1A rights, it’s good to have a 2A solution handy.

A quick perusal of the letters to the editor in today’s San Diego Union-Tribune confirms this nonsense.

These people have been on a diet of Fake News for years. They are mannerly enough in person, but on the subject of politics, their lack of situational awareness makes them look like complete non-thinkers.

As their own range of acceptable beliefs gets narrower & narrower, the left will end up walking a virtual tightrope of their own making. Then, how long will it be before they fall off.

Or get knocked off.

The Left cannot debate with facts as the facts are never in their favor. This is just the logical extension of their problem. With too many people starting to debate with facts, they can’t keep up enough garbage rhetoric to keep public opinion on their side. SO kill any debate so the facts can’t get out. Next step? They’ve already taken that – violence.

The Left cannot debate with facts as the facts are never in their favor.

As several people on the Right (specifically pro-Second-Amendment activists) have pointed out, “If your cause is so righteous, why lie?”

What is hilarious about the left is that they are flocking to the Orwell movie, “1984”, not realizing that they are the “Big Brother” in the movie. They use doublespeak and burn books, deny opposing speakers their free speech rights. I wonder if it will ever dawn on them?

I applaud the 1984 showings. I truly believe it will turn a few of them around, at least those who have any integrity.

Most of them, no, it won’t ever dawn on them. The “doublethink” is so ingrained in their minds that they don’t even consciously see the logical inconsistencies; indeed, they’ve trained themselves not to see them (which is the book-provided working description of “doublethink”).

If a Leftist saw the falsities and inconsistencies in their chosen “The Narrative[TM]”, he/she would certainly address the problem (just ask them 😉 ). But how do you deal with a whole section of the populace who has trained themselves to not perceive anything wrong with their point of view, and as such perceives everything with yours as wrong?