The “resistance” really really wants to win this special election

While losing the House seat vacated by Tom Price in Georgia’s 6th district will make little immediate difference in real terms for  Republicans, doing so will provide an unwelcome boost of morale and momentum to anti-Trump regressives.   Democrats and “resist we much” activists across the country know this, understand the momentum such a victory would create, and are unleashing all of their resources on this tiny, mostly conservative district near Atlanta.

Team Obama, Hollywood has-been Samuel L. Jackson, and outside volunteers and money are flooding into the district with the hopes of scoring a win on Tuesday for the anti-Trump “resistance.”  To that end, they are all rallying behind progressive Democrat Jon Ossoff.

Ossoff worked as a staffer and aide to Representative Hank Johnson of “my concern is that Guam will tip over” fame and has been endorsed by John Lewis. 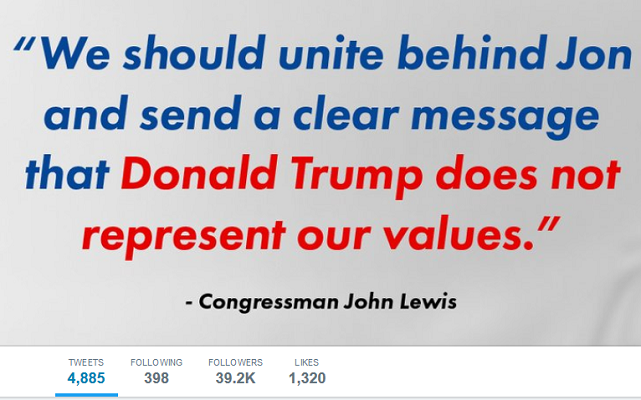 Team Obama is represented in Georgia by former Secretary of the House and Urban Development Department Julian Castro.

A member of former President Barack Obama’s Cabinet, Julian Castro, is rallying support for Jon Ossoff the leading Democratic candidate in the special election to take the Georgia congressional seat vacated by Republican Tom Price when he became Health and Human Services secretary.

Castro, who served as Obama’s secretary of the House and Urban Development Department, met with supporters at Ossoff’s office. Pictures of the event were posted online Saturday.

Team Hollywood is also making an appearance in support of progressive Democrat Ossoff, with Samuel L. Jackson in a radio ad urging Georgians in the 6th district to “Stop Donald Trump.”

“Stop Donald Trump, the man who encourages racial and religious discrimination, and sexism,” Jackson says in the ad, put out by the Democratic Congressional Campaign Committee.

. . . . “Remember what happened the last time people stayed home,” Jackson adds. “We got stuck with Trump. We have to channel the great vengeance and furious anger we have for this administration into votes at the ballot box.”

In addition to Castro and Jackson, a host of volunteers and a cascade of cash floods into Georgia’s 6th in support of Ossoff.  Anti-Trump volunteers from DC, Michigan, and New York are arriving by the busload.

KAUFFMAN [NPR reporter]: There are volunteers here from around the country. Jordan DeLoatch wrote an overnight bus from North Carolina that the Ossoff campaign chartered.

. . . .  KAUFFMAN: The campaign is also bringing busloads of volunteers from the Washington D.C. area, Michigan and New York. DeLoatch says volunteers want to fight back against President Trump and the Republican Congress.

DELOATCH [volunteer]: It’s kind of the first chance to really send a message.

LAURA PHIPPS: It’s much less frustrating when you’re working, when you’re doing something.

Karen Giorno, a former senior advisor for the Donald Trump campaign, is making her second day of appearances with Bob Gray, a former Johns Creek city councilman who is battling for a runoff spot with another Republican, Karen Handel.

Hill has some of the race’s highest profile endorsements, including from U.S. Sen. Marco Rubio, but those haven’t translated into any polling success for the longtime state lawmaker.

Karen Handel, who, along with Gray, are vying for the No. 2 spot behind Ossoff, also picked up a national endorsement late last week. Maggie’s List, a federal political action committee dedicated to electing conservative women to federal office, endorsed Georgia’s former secretary of state.

Handel has also been endorsed by dozens of mostly local elected officials, as well as former U.S. Sen. Saxby Chambliss.

Meanwhile, yet another GOP candidate, Kremer, has been endorsed by Sean Hannity and by a former Trump aide.

“Listen, you have been a champion out there hitting the pavement for all these years,” Hannity said. “It’s people like you that I’d love to see in Congress and think you would do a great job … I hope you win!”

“I fully support and endorse my friend Amy Kremer in her bid for Congress,” Pierson said. ”Everyone claims to be #teamtrump but I know who actually was!”

If no candidate wins over 50% of the vote, there will be a run-off election in June.

Well, this race is over! It was going to be tough until the great traitor jumped in with both feet. Jane Fonda has joined in and made a big contribution to this idiot and that should take him out of the race for good. This is GA! Not LA or CA. Even Dems here do not like her. She is a traitor and to be endorsed by a traitor is about the worst thing that can happen to a pol here.

Samuel L. “I’m no loner relavent” Jackson is plugging for the regressive candidate, while lying about President Trump’s views and beliefs and now Hanoi Jane has joined him? All the Repubs need now is for John “I’m a war criminal” Kerry to jump in and seal the deal for them!

It would be difficult to find two (or three) more despised people to send down there.

I have a hard time tolerating Samuel’s voice anymore. Kind of like Hillary’s.

notamemberofanyorganizedpolicital in reply to Helen. | April 17, 2017 at 2:35 pm

They’ve got a shot.

Tell me they don’t have same day registration, please! Who won the district, Trump or The Cough?

As usual, the dumbassed ‘pubs have a boatload of candidates – about twice as many as the ‘rats, and they spend their time and $ running their mouths against each other instead of against the ‘rats.

The ‘rats have a good chance. Ossoff doesn’t have any real competition among the ‘rats and they have the inherent wisdom to coalesce around their leading candidate while the ‘pubs continue to squabble and divide their ranks.

My take is this:

I think the election comes down to the GOP keeping Ossoff under 50%. If they do that, Ossoff will be beaten badly in the runoff. Low turnout will mean an Ossoff victory.

I think Ossoff has not come close close to unifying the Democrats in the District. There are many “Voting for Slotin” yard signs peppered around Sandy Springs. This should keep Ossoff under 50%. Oddly, Ossoff does not even live in the District. Well, I guess neither do many of his supporters.

This Good Friday, the early voting at the North Annex in Sandy Springs was out the door and halfway around the short side of the building; about 120 feet. I was concerned that most of these folks were Ossoff supporters. This was at 3:30 pm.
An hour later, I drove to the Milton Library where the line was even longer. This is in deep red Georgia. I feel very good about my feeling about this race.
I think the PAC ads run by the National GOP groups have been very effective against Ossoff.

Well, bringing Hanoi Jane and foulmouth Samuel “What’s in your wallet?” (the race card) Jackson won’t help 30 yr. old pencil-necked, geeky Ossoff except with the black vote and the far, far left, which I doubt there are very many of in that district. It may take some voter fraud to get Ossoff over the 50% line, but that should be no sweat for the ‘rat machine.

I liked the old Samuel L Jackson, the one who said this: “I go to premieres and folks start asking me, ‘How do you feel about the president?’ I think, ‘What the [expletive deleted] do people care what I think about the president?’ I’m an actor. All those actors out there stumping for this candidate or that candidate, it’s bull. . . . “Just pay your taxes,” Mr. Jackson tells actors. “Stop standing up and saying, ‘We need to lend our money to so-and-so.’ You make $20 million a picture. Shut the [expletive deleted] up and give them a million dollars. Don’t ask Joe Everyday for $5. He might need that $5. You’ve got money to burn.”

In the ad Jackson made, he uses the phrase “great vengeance and furious anger.” Some people will recognize that phrase from Jackson’s role in Pulp Fiction. His character recited a bible verse that includes that phrase before he blows the head off an unarmed, defenseless man sitting in a chair.

I find it psychologically fascinating that the Madison Avenue types who advise campaigns on how best to manipulate and rape our minds with political advertising decided Democrat voters will respond to a phrase uttered by a character who is an unsympathetic, sociopathic, mass murderer with no conscious or any redeeming qualities.

45 second clip and the phrase happens about the 25 second mark.

Old Sam is gone. Once obama took office it seemed you couldnt be Black and not be offended by White people being alive . I’m surprised that he is out there actually suppprting a White man.

There’s a photo floating around of Jackson and Ossoff walking down a neighborhood street. A more incongruous pair I’ve never seen.

One of the local ads says Ossoff lied about being a national security expert and played with lightsabers in college. Don’t vote for Ossoff.

My first thought was, if your second point of why he shouldn’t be elected is that he played with lightsabers in college, you should leave that out of the add and stick with just the one.

What the hell is wrong with playing with lightsabers at any age?

I saw a link to a report at Salon which says Ossoff is polling at 39%. If so, even if he’s in the runoff, he’s toast.

Three words sum this up: “resist we much”

Will Georgia fall for this nonsense? Nope!

I’m not sure Jackson has any less influence than before, which is not a whole lot. People have been tired of the pontificating for a while. But he’s hardly a has-been or washed up.

It’s a stretch to think Ossoff can get 50%+, but a runoff could be close depending on who the other person is.