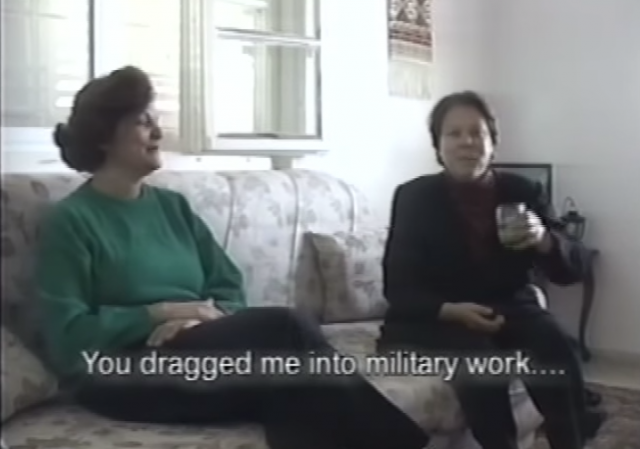 The prosecution of Rasmea Odeh started out quite simply.

Rasmea signed a naturalization form that denies she “EVER” (bold and CAPS in original) was convicted or imprisoned. That was a lie. Rasmea was convicted in 1970 in Israel of the 1969 bombing of a supermarket in Jerusalem in which two students were killed, and attempted bombing of the British Consulate.

In the first trial, the judge did not allow Rasmea to relitigate the Israeli conviction with good reason — whether the conviction was correct or not, the conviction and subsequent imprisonment were facts that had to be disclosed in response to the questions. The questions did not ask whether Rasmea “justly” or “rightly” or “fairly” was convicted or imprisoned, so the propriety of the conviction was not legally relevant.

Everything began to change when the appeals court remanded the case to the trial court to determine whether Rasmea should have been permitted to call an expert witness.

In a decision which was a legal mistake in my view, the judge granted Rasmea the right to call an expert witness at a new trial to testify that Rasmea did not “knowingly” answer questions falsely on immigration forms because she suffered PTSD as a result of alleged Israeli torture in 1969. That PTSD, Rasmea’s expert will claim, caused her to “filter” questions about whether she “EVER” had been convicted or imprisoned, such that “EVER” was interpreted by her subconsciously as covering only the time since Rasmea arrived in the U.S. in the mid-1990s.

It’s a thoroughly dishonest defense which should not have been allowed, but the court will let her present the expert testimony. Please see that prior post for background on Rasmea’s conviction and imprisonment, and false answers. The expert testimony is part of a jury nullification strategy by the defense, hoping that if Rasmea essentially can relitigate the Israeli conviction by claiming she was tortured to confess, the jury will feel sorry for her an refuse to convict of falsely answering the immigration questions.

The prosecution warned in opposing the new trial that the new PTSD defense would change the nature of the case, that it would amount to a relitigation of the Israeli conviction, and that it would force the prosecution to prove elements in Rasmea’s past not part of the initial charge of answering questions falsely. And that appears to have played out.

The new trial was scheduled for January 10,2017. Yesterday, the defense filed a motion to postpone (pdf. here, full embed at end of post) the trial because a new, superseding 18-page indictment had been obtained against Rasmea.

While the Superseding Indictment has not been filed in the court docket as of this writing, the US Attorney’s office yesterday issued a press release (pdf. here), the key section of which states (emphasis added):

A federal grand jury has returned a superseding indictment against Rasmieh Yousef Odeh, 69, of Chicago on charges of procuring her naturalization unlawfully by failing to disclose that she had been convicted of participating in a terrorist bombing, announced United States Attorney Barbara L. McQuade

… The retrial will proceed based on the new indictment.

The new indictment does not add any additional charges, but alleges additional facts to support the charges. The original indictment charged that Odeh lied in seeking her naturalization as a United States citizen by failing to disclose that she had been arrested, charged, convicted and imprisoned in Israel, beginning in 1969, as a result of bombings of a supermarket and the British Consulate. The new indictment includes those allegations as well, but also alleges that Odeh, in seeking naturalization, also falsely answered two additional questions on her application form relating to her association with the Popular Front for the Liberation of Palestine, a designated terrorist organization. The new indictment also alleges that Odeh was inadmissible at the time she arrived in the United States in 1995 because she “engaged in a terrorist activity” as that term is defined by law.

I noted in yesterday’s post that this was an extremely important expansion of the Indictment, even though it doesn’t expand the number of charges.

The entire line of PTSD defense — which never should have been permitted but was in the order granting a new trial — only addresses Rasmea “filtering” out her conviction and imprisonment because of alleged torture (which the government disputes). But she told other lies on her immigration forms that had nothing whatsoever to do with the alleged torture and PTSD, namely her membership in a terrorist organization. That lie is provable by the government without even getting into her conviction of the bombings.

Similarly, referencing engaging “in a terrorist activity” is much broader and easier to prove, and does not depend on the legitimacy of her Israeli conviction.

So, this is a very important move for the prosecution, and makes the PTSD defense much less critical to the case.

Defense counsel Michael Deutsch appears to agree with my analysis in an interview with the Electronic Intifada:

The new charges appear to try to circumvent Odeh’s PTSD defense by alleging that she was a member of a “terrorist organization” – the Popular Front for the Liberation of Palestine (PFLP) – and was therefore legally inadmissible to the US when she first immigrated in the 1990s.

In Odeh’s first trial two years ago, Judge Drain barred any use of the word “terrorism,” arguing it could prejudice the jury. He also refused to allow Odeh to testify that she had been tortured to confess.

Drain stated that he did not want to retry her alleged offenses from 1969, saying the US trial should be focused only on the answers Odeh gave on her immigration forms.

But Drain nonetheless allowed the government to talk about the 47-year-old Israeli charges against Odeh – that she had participated in two bombings in Jerusalem that led to two deaths.

The new indictment adds two new allegations that were absent from the government’s previous case: that Odeh was engaged in “terrorist activity” in 1969 and that she was associated with a “designated terrorist organization.”

Michael Deutsch, Odeh’s lead attorney, says the PTSD defense would not apply to these allegations, since they allegedly took place before she was tortured by Israeli interrogators.

If Drain accepts the new indictment, the government will dedicate a portion of the trial to proving these allegations.

“This is the government’s response to the fact that we intend to put in the fact that she was tortured and suffers from PTSD,” Deutsch said, adding that it is nearly impossible to get a fair trial when accused of being a terrorist.

The superseding indictment alleges that Defendant Odeh falsely answered the question, “‘Have you EVER been a member of or associated with any organization, association, fund, foundation, party, club, society, or similar group in the United States or in any other place?’” (Superseding Indictment, General Allegations, ¶ 19, citing Naturalization Application Part 10, Question 8a, capitalization and bold in original.) That allegation did not appear in the original indictment. The superseding indictment alleges that the false answer rendered Defendant Odeh’s naturalization contrary to law. (Superseding Indictment, Count 1, Paragraph 2(D)(1).)

The superseding indictment also alleges that Defendant Odeh falsely answered the question, “‘Have you EVER been a member of or in any way associated (either directly or indirectly) with a terrorist organization?’” (Superseding Indictment, General Allegations, ¶ 21, citing Naturalization Application Part 10, Question 9c, capitalization and bold in original.) That allegation did not appear in the original indictment. The superseding indictment also alleges that the false answer rendered Defendant Odeh’s naturalization contrary to law. (Superseding Indictment, Count 1, Paragraph 2(D)(1).)

As a result, the superseding indictment alleges and the jury will be called on to decide, whether Defendant Odeh could satisfy the statutory requirements for naturalization. The indictment alleges that because she could not satisfy those statutory requirements, her naturalization was contrary to law. (Superseding Indictment, Count 1, Paragraph 2(E).)

In that connection, the government intends to seek authorization from the Court to take depositions of two witnesses located overseas and who have first-hand knowledge of Defendant Odeh’s involvement in terrorist activities. That motion could not have been filed prior to return of the superseding indictment, because those witnesses’ testimony only became relevant based on the new allegations in the superseding indictment.

Who could those witnesses be? Perhaps one of them will be Ayesha Odeh [see Featured Image], Rasmea’s co-conspirator convicted in the same trial as Rasmea in 1970. 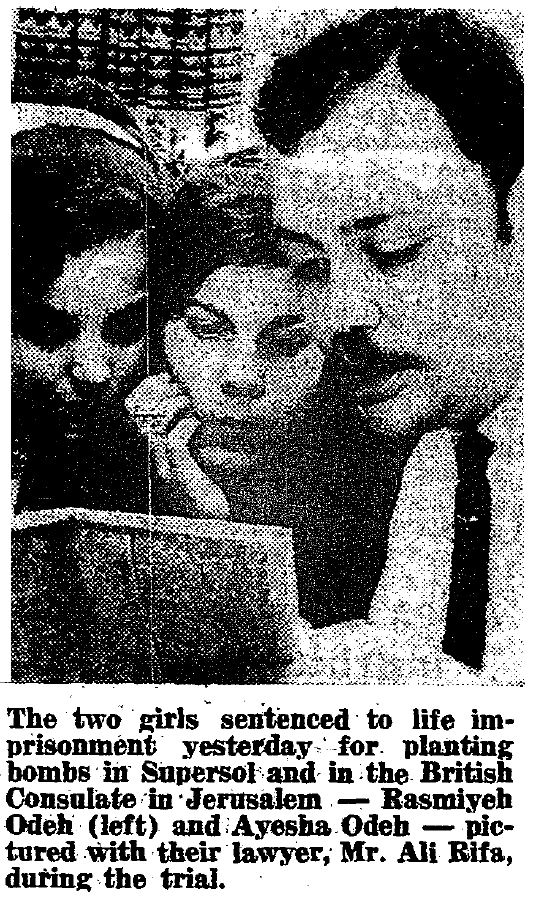 Twice on video Ayesha has discussed Rasmea’s involvement in terrorist activities, including the supermarket bombing:

Expect there to be legal challenges to the Superseding Indictment being used in the case. But there must have been a reason the prosecution pursued a Superseding Indictment which did not assert new criminal charges (only new allegations as to the existing single charge). I’m assuming that a “superseding” indictment avoids any time limitation and other procedural problems, though I haven’t researched it.

It will be interesting to see how the Judge reacts. Rasmea never should have been allowed to call her PTSD expert, and the prosecution warned that the case would expand in a new trial.

Barring some unforeseen development, it looks like a spring 2017 trial, with the prosecution proving Rasmea was a terrorist, and also lied on her immigration forms.