Last night anti-Israel groups, led by Students for Justice in Palestine and “Jewish Voice for Peace,” took advantage of the Passover Holiday when many Jewish students already had left for home for the Passover Seders, to bring to the Tufts University student Senate a resolution to divest from certain companies doing business with Israel.

The resolution was loaded with defamatory “Whereas” clauses portraying Israel as at the “intersectional” center of worldwide injustice, much as the international Jew has been portrayed in classic antisemitic literature as the source of the world’s problems. I discussed the details and how the process was manipulated in my prior post, Another sneak Passover Divestment attack, this time at Tufts University.

That resolution will not change any facts on the ground but it reflects the continuing reality of the passage from the traditional Passover Haggadah:

Fifteen years ago, during the 2nd Intifada, a Palestinian suicide bomber blew up a Passover seder at the Park Hotel in the seaside town of Netanya, Israel:

In 2017, those rising against us are the coalition of Islamists and regressive leftists. Those same groups also rise up against Christians, which reminds me to repost an excerpt from the first Legal Insurrection Passover post in 2009, Passover Is No Time To Wish For The End Of Christian America:

I think of Christian Americans like Vernon Tott of Iowa who not only liberated concentration camps, but took the time thereafter to bear witness to what he saw (and decades later to reunite with one of the prisoners he liberated) ….

I also think of Harry Truman, the Christian American President who made the United States the first nation to recognize the State of Israel in 1948, and Richard Nixon, the Christian American President who saved the State of Israel with an emergency airlift of military supplies in 1973. Whatever personal sentiments these two men harbored regarding Jews, they stood with the Jews when it counted….

Passover is a festival of liberation of the Jewish people. 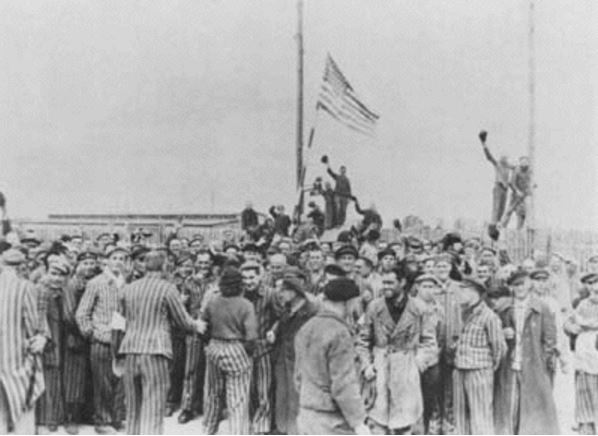 But enough with the heavy stuff.

For those of you who don’t want to read along, here’s a short all-purpose “Jewish History in One Sentence“:

Via Powerline, 1 Minute Haggadah from Technion for Passover:

And a replay from last year, “Hello from the Other Side … Free at Last in the Sinai”:

Any questions? You are permitted up to four:

To our non-Jewish authors and Editors, can you cover for me tonight?

Blessed Passover to all!

We are all the Children of God!

As a Christian American I would stand arm in arm with Israel against all the fiery darts because what hurts Israel, hurts me too.

If you want to be a SEAL swim to Denmark in January.

You get a boogie board. But swim from the boat to Denmark. Then evade the Danish military, Home Guard, and police. Get into position to kill the PM (This is all in good fun, it’s only an exercise). Take our shot. Now evade the seriously motivated Danish Military. Which is not to be despised.

So now evade the alert and motivated Danish cops, military, and home guardsmen, and swim back to the boat.

I think what might be most appropriate on Passover is to remember is that the ordinary Danes didn’t abandon the Jews. At considerable risk to themselves.

So if you think you can do all that you might just maybe be a Navy SEAL.

Keep all the men and women who are serving in your thoughts and your prayers.

(Yeah, I know it’s a French Frigate Latouche-Tréville but that doesn’t mean I can’t respect the men serving in her)

A happy and peaceful Pesach to all Jews everywhere.

A peaceful Holy Week and a joyous Easter to all Christians everywhere.

I responded to you on an earlier comment thread. It wasn’t anything you said. I can’t imagine a more inoffensive people than the Buddhists. OK, the Jains.

Who burned the library at Nalanda? Who killed the monks?

I want an accounting. And I want it to hurt.

I regret to tell you that there are Buddhists behaving badly in Thailand and Burma. And that, although the Buddha lived in northern India, Buddhists have been rare on the ground in that country for a long, long time. The faith went north and east, and the native religions (many of them variants of Hinduism) reclaimed India.

Human nature is ugly. May God help us to follow His commandments more nearly.

Yes, I was thinking about them. They’re “behaving badly” because they’re tired of being slaughtered. I am 100% with the Buddhists. What do you know about their history? Give them h3ll.

You might as well say the worst thing Daniel Pearl could have done was think an “Islamophobic” thought before he got his throat slit.

Ms. Kate, I plan on thinking some very “Islamophibic” thoughts before anyone cuts my throat.

I have a Thai Buddhist sister-in-law, someone I dearly love, and having lived in Egypt for two years I am very familiar with Islamic culture and history. I would say I know more about Islamic history than many of the Egyptian Muslims I met.

I cannot imagine what I said which makes you think I might be someone who sees “Islamophobia” everywhere.

I will try to be more precise in my language. I didn’t mean to imply that you see “Islamophobia” everywhere. What I did mean to say is that the general consensus, as far as I can tell, is not giving the Burmese Buddhists a fair shake.

The Buddhists, with considerable justification, consider the Muslims in their midst Bengali invaders. They are not indigenous. The British brought them in as labor. The Muslims last mass killing in Burma occurred in 1942. I believe 30,000 Buddhists were killed. In the late ’40s and continuing until the early ’60s the Muslims waged jihad against the Burmese state. At first with the intention of joining what was then East Pakistan. Later just to carve out their own country.

There is a history here. It’s why Aung San Suu Kyi, noted human rights icon, does not denounce her countrymen for “behaving badly.” She knows the history behind it. To paraphrase one Buddhist monk, speaking of the Muslims, they came here, they took, and they are not grateful.

None of this is directed at you personally.

The Thai’s have their own schedule.

“Named as capital city of Thailand, Bangkok is also known for historical temples such as Wat Phra Kaeo, Wat Suthat and Wat Arun. However, in complementary with these scenic structures is their rich culture. Indeed, if there is a place here in Thailand that reveals the past, that is Bangkok. Just when the calendar turns to the month of April, people from different countries arrive in the place to witness Bangkok Songkran Festival.

While others unwind in beach resorts, the natives of Bangkok including the visitors find relief against the reigning heat of the sun through joining the famous water fight. Songkran by definition is the celebration of Thai’s New Year. Water fight, on the other hand, is a way of washing the bad luck so as the good luck would enter in the present year. Songkran is celebrated for three days starting April 13 to April 15, though in other parts of the country, this event is celebrated in the entire week.”