Threatens to chastise guest by giving him a “talking-to” 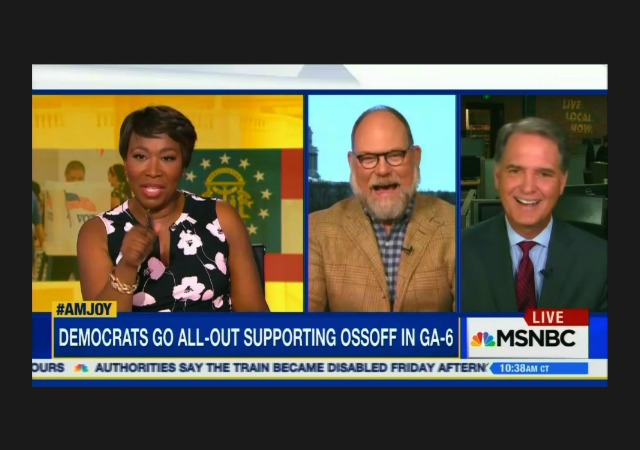 For someone who styles herself an advocate of diversity, Joy Reid has a funny way of shutting down diverse voices. Legal Insurrection has documented how in the past she has silenced and even ejected guests who ran afoul of her speech codes.

Back at it today, Reid reprimanded Republican consultant Katon Dawson for referring to the “Democrat” party. “On this show, we say Democratic,” instructed Reid, telling Dawson that “we’re going to have to sit down. We’re going to have a talking-to.” Being lectured by Joy Reid: now there’s something to look forward to!

Democratic, like how Hillary stacked the Elector count against Bernie Sanders? That kind of democratic?

LoL – take a second look at the text-crawl MSNBC put on the screen while Reid was in her screed.

She is the obama of television talking heads.

There are so many.

Democratic as in majority rule. With minority rights?

Class diversity (i.e. judge people by the “color of their skin”) would seem to disqualify the latter.

He should have retorted “Actually its the Dictatorship Party….

should have called it the losing party

And, like so many Leftists of her ilk, she’s wrong.

notamemberofanyorganizedpolicital in reply to profshadow. | April 15, 2017 at 4:21 pm

I get the point, although calling it the Democrat Party still falls harshly on my ears.

However, that is also the party that delights in forcing whimsical vocabulary changes on others, for the purpose of infuriating them. Joy Reid is one of them.

So, Joy Reid is not just a member of the Democrat Party, she is also personally FOS.

I would be more inclined to agree with someone who had not flunked a test of decency.

notamemberofanyorganizedpolicital in reply to Valerie. | April 15, 2017 at 4:22 pm

“Joyless Red” is her new name.

Trivial comment, but since my first name is Reid, I’ve been annoyed by idiots like Harry and now Joy. Such is life. MAGA!!!

I’m surprised she didn’t call him a racist.

notamemberofanyorganizedpolicital in reply to HamiltonNJ. | April 15, 2017 at 4:23 pm

I thought Joyless Red did……

I wonder what Reid’s job would be were it not for quota hiring.

Isn’t her picture still on the pancake mix?

No one cares what you call your cabal of bandits, race mongers, and street thugs. I call them garbage.

Of course the D-party can call itself anything it wishes, but as a point of interest, the word “democracy” is not to be found in the 1777 Articles of Confederacy, nor in the 1787 Constitution, nor in any one of the 50 state constitutions.

Meaning, what does that party have in common with American principles?

“…what does that party have in common with American principles?”

To the generation of leftist fascists coming out of our school systems, it has everything to do with ‘Amerikan principles.’

Who calls it the Democrat Party?

The DNC calls it the Democratic Party.

It’s been the Democratic Party since Jackson.

I don’t recall seeing any historical or modern reference to it as the Democrat Party. But I have come across slight hints that some consider that a derogatory name—why, I have no idea.

Personally, I call it the “Filthy S— Party”, but that term has yet to achieve national acceptance.

In the Jefferson era it was the Republican Party. Federalists liked to call it the Democratic-Republican Party to taint it with the whiff of “democracy”, which in those days was considered tantamount to mob rule.

D’oh! The Jackson-era name wasn’t official … “Democratic Party” became the official name in 1844, during Tyler’s reign. By then Tyler had been thrown out of the Whigs but at least he wasn’t a Democrat.

Both Whig candidates elected to the Presidency—Harrison and Taylor—died in office. No wonder the Whigs went extinct.

I think Rush Limbaugh may have started it. He always calls it the “Democrat Party”. A few years ago I saw a commenter on a left wing blog say he thinks Rush uses “Democrat” because the “rat” part of the name causes the listener to subconsciously associate Democrats with the rodent and reinforces the listener’s negative association with the party. Sounds pretty deep to me, but who knows.

At any rate, the Democrats mistake was acting offended by it. That only incentivized Rush to keep doing it.

Bob Dole started it; I don’t remember exactly when.

Rush may have picked it up from him.

Well, they’re “Democrats”, not “Democratics”, just like “Republicans” aren’t “Republics”,so Joy can pound sand and her “talking to”.

I bet she doesn’t have any problem with the term Tea Baggers.

There was nothing DEMOCRATIC about the way they stole the nomination from Bernie last year….

Just a bunch of DemonRATS to me.

I always call it the Democrat party. It helps to weed out the rabid, frothing at the mouth left wingers in conversations.

How about Demoncrap party>

I like to keep things simple and I’m lazy. They really aren’t worth the extra syllables so I just refer to them as the “‘rats”.

Since they’ve always had a certain “ick” to them, just say Democrat…”ICK!!!”

The dumbing down of Americans continues…..maybe, just maybe, ol’ Joy could smarten up and say Democrat party.
Eedjit.

I’ve been waging a one-man war on the use of Democratic for the Democrats, because, simply, there is nothing democratic about the Democrats.

Come now. Surely we all know that calling it the “Democrat Party” is rude, and we do it because it’s rude. There’s nothing wrong with that, but let’s not pretend it isn’t so. I do it myself, just as I make a point of spelling 0bama’s name with a 0 instead of an O; I know that’s incorrect, and I do it with the intention of being rude. But if I were a guest writer on an 0bama-supporting web site I wouldn’t do it; and if I were a guest on a Democrat-supporting show I would use the party’s correct name, out of respect for my host. Joy Reid has the right to insist that she will not allow childish name-calling on her show, but I would expect her to object equally to names like “Rethuglican” or “Drumpf”.

The mammogram thing could simply be ignorance. Has anyone actually told her that PP doesn’t do them?

There is nothing democratic about the democrat party.

Ahhh…I would love to see them “correct” one friend of mine. If he was told not to call it the democrat party he would call them the commie_crat party.