Liberal and conservative groups air ads during the April recess 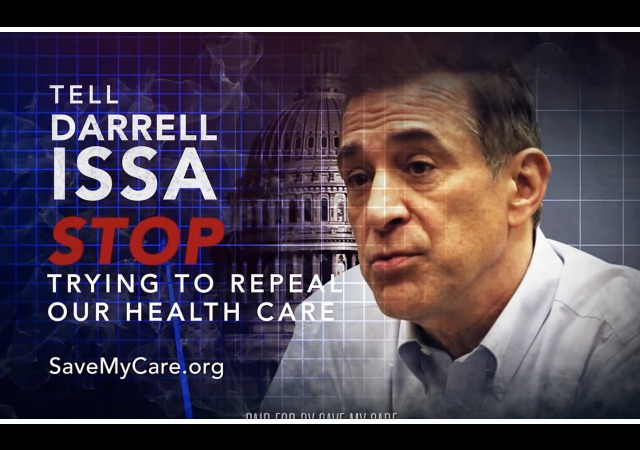 Midterms are 18 months away, but groups on both sides have planned ads to target vulnerable Republicans over the failure to repeal or reform healthcare.

Congress has begun its recess, which has led groups like Save My Care to release ads. The group has spent $1 million on TV spots this month “that highlight the members’ support for the GOP health-care plan that now stands in limbo in the House.”

But conservative groups have also planned ads “against moderate Republicans” they placed blame on “for the holdup on an ObamaCare repeal bill.”

These are the seven Republican seats the Democrats want to flip in 2018. In this ad against Rep. Darrel Issa (R-CA), the narrator states that the congressman “promised to protect our healthcare” and that he “couldn’t protect us from a bill that raises premiums and causes 23 million to lose insurance.”

The Bridge Project released an ad called Trumpcare 2.0. From CNBC:

“Republicans in Congress are fighting to bring back Donald Trump’s disastrous health-care bill. ”

“If Trumpcare became law, it would gut health-care to America, and signal disaster for millions of families,” the voice says. “Tell your member of Congress, don’t let Donald Trump sell you out.”

The conservative group Club for Growth developed two anti-Rep. Chris Collins (R-NY) and Adam Kinzinger (R-IL) ads. Neither supported the House GOP healthcare bill. In the ad, the group praises President Donald Trump for the healthcare bill and for “working with conservatives on a better bill that lowers premiums, cuts taxes, and repeals Obamacare.”

“The Club for Growth supported the deal for state waivers of costly Obamacare regulations that was facilitated last week by Vice President Pence, but moderates blocked that progress,” Club for Growth president David McIntosh told reporters during a conference call Monday.

Even with the changes the White House negotiated with holdout members before they adjourned Thursday for a two-week recess, “it’s not perfect, but at this point we need to get this done,” McIntosh said.

As The Washington Examiner points out, Collins and Kinzinger have blamed the House Freedom Caucus for the failure of the healthcare bill:

Collins has very publicly blamed Freedom Caucus members for moving the repeal and replace package so far to the right that Tuesday Group members can no longer support it.

“A vast majority of us were ready to vote yes, but one faction of the party made it impossible: the House Freedom Caucus,” Kinzinger wrote in a March 31 op-ed. He added that Trump gave the caucus reductions in essential health benefits but said the concessions weren’t enough for the caucus to “on-board, as usual.”

Just wait. I predict that Trump will submit a whole slew of Recess Appointments. That will suck all the air out of the Obamacare narrative.

It’s the ‘Replace’ Republicans that are vulnerable.

They richly deserve to be.

The counter-argument to this narrative is to point out that the Dims are conflating health “coverage” for health “care.” You then point out that we have been running a multi-decade experiment in government-run health “care” which is called the VA system. You then point out the criminality, graft, theft and corruption which has resulted in countless government cronies enriching themselves while maintaining cooked books in order to pad their bonuses while those whose care is entrusted to them literally die waiting. Thanks, but no. Hell no.

All of which was true eight years ago. But we got Obamacare anyway. So even if that argument is necessary, it’s not sufficient.

The results of The Oregon Study were not available at the time Obamacare was rammed down our throats. The VA system has been a mess for a long time, but here we have a large randomized study showing that government healthcare doesn’t improve health outcomes as compared to NO COVERAGE.

Sometimes a message has to be delivered many times before it will be heard, processed and accepted.

“Vulnerable Republicans:” a pleonasm, if there ever was one.
https://en.wikipedia.org/wiki/Pleonasm

That one drove me to a dictionary.

Me, too. I was completely surrounded with confusion.

Sponsored by the special interests that profit from schemes and regulations, including Obamacare, that ensure medical products and services remain unaffordable and unavailable.