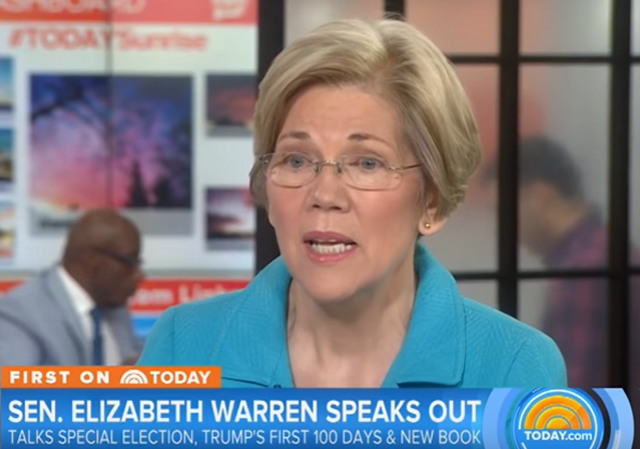 Elizabeth Warren says she’s not running for president in 2020. She could have fooled us. Her actions suggest not only is she running, she has already begun. Still, she denies it.

Sen. Elizabeth Warren (D, Mass.) stated that she is not running for president in 2020 during an interview with MSNBC’s Rachel Maddow on Wednesday night.

The question came at the end of an interview in which Warren discussed her new book, This Fight Is Our Fight: The Battle to Save Working People. Maddow also asked Warren to discuss the ongoing questions about the possible connections between President Trump’s campaign and Russia.

Finally, at the end of the interview, Maddow popped the question.

“If you were running for president in 2020,” Maddow asked Warren, “you would not want to talk about it now, with me or anybody else, is that true?”

Here’s a video of that moment:

Warren has positioned herself as a leader of the “Resistance” against Donald Trump. She’s pretty busy for someone who’s not planning to run for president.

Warren builds her brand with 2020 down the road

Her office says she’s focused on her Senate reelection bid.

But she has the public schedule of a future presidential candidate.

Warren will speak Sunday to the NAACP in Detroit, and next month she will deliver the keynote address to an annual gala held by EMILY’s List, which aims to elect female candidates who support abortion rights.

Warren has also released a new book titled “This Fight is our Fight” which she promoted in an appearance on the Today Show last week. During the segment below, she is asked about 2020 and gives pretty much the same answer she gave Maddow:

At this point, it’s hard to imagine who the Democrats will run in 2020 if not Warren. If you watched the Today Show video, you may have noticed that Warren repeatedly mentions the middle class.

That ship sailed with Donald Trump in 2016 and Warren’s party has shown no interest in winning back those voters.

Somebody should keep a tally.
And start a video compilation, so that you have it ready when the day comes.

Unfortunately she lies as much and as effortless as Obama.

As a Democrat for over 50 years, I find people such as Warren, Schumer, Perez, Nelson (D-FL), etc., to be absolutely LETHAL to the Democrat Party.

To anyone who believes this, I’ve got a bridge with a great view of the Manhattan skyline for sale.

Can it be moved to Camp San Saba, Texas? The river is mostly dry, but you never can tell.

The problem she has is one of honesty that even Democrats can’t get over. You DON’T go stealing another people’s identity to further your own personal goals while giving absolutely nothing back and expect to be able to run for President.

If she runs she will be buried by Trump.

Sen. Warren is “behaving” like a Presidential candidate, but I don’t think that’s what is going on here.

She is high-energy, and 50 is apparently the new 20, but look at it from the other perspective, which I have discussed before: In 2021, Elizabeth Warren will be 71 years, 7 months old, which would make her immediately the oldest person to ever assume the office of the President (followed by Donald J. Trump at age 70, and Ronaldus Magnus at age 69). The media mercilessly mocked Reagan for his age through his entire presidency, and I expect in a few years that will start with President Trump as he begins to look a little worn (it happens to ALL Presidents). The instant that happpens, it becomes a cross-attack line against Warren.

If I had to guess, I would say that Sen. Warren is rallying the Progressive-Leftist base with an eye toward being a “Kingmaker” for the 2020 and 2024 election cycles. She wants to be rich and powerful: the two thinks she has ALWAYS craved, given her early family life, her young family’s lack of resources from her Father’s heart attack at a young age.

She doesn’t want to be President. She wants to be the power behind the throne, that every Progressive attends to kiss the ring and receive her blessing.

You have to admit, the Dimocrats have a strong bench…if you’re looking for an unappealing presidential candidate!

If Warren is the best the Democrats can do, they’re in big trouble. Granted, she seems to be in better condition than either elder Clinton, but still, she’s not likely to appeal to the country as a whole.

She won’t be the nominee. It will be Mark Cuban.

Heh – Cuban likes to sit on the sidelines and complain about the refs, and generally kibbitz about everyone else. He’s never going to make himself a target.

With the right smoke signals she can get lots of wampum.

The deceptive kabuki theater that Warren and other politicians play about their intentions really bugs me.

Saying “I’m not running for president in 2020” is meaningless. It’s in the present tense. So yes, it is true that Warren is not currently a declared candidate.

But if she really wanted to quash speculation, she could simply say “I will not run in 2020.” But of course she won’t say that.

Mark, it’s up to non-Leftist media to speak precisely and pose specific questions to the Dems, like:

Two things Rab, she’s a democrat and a politician. Neither has ever discovered the definition of truth.

Her payola franchise will be much more lucrative if she remains a perpetually potential presidential candidate. Whoring for the left has got to be the easiest gig in existence.

The high-profile talk circuit is actually pretty normal for someone hawking a book.

It’s that old game politicians play with tenses. She will run (and probably win the nomination). But she is not presently running. That’s all “I am not running for president,” actually means, colloquial implication aside.

If writing a crappy campaign-like book destined for the bargain table isn’t a “requirement” before running for president, I don’t know what is.