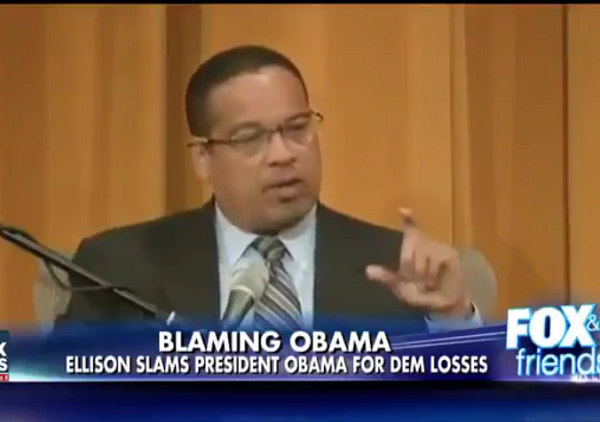 Representative Keith Ellison (D-MN), deputy chair of the DNC, has rattled the left with his unflinching grasp of the obvious:  Obama, Ellison claims, deserves blame for Democrat losses during his presidency.

While Obama himself somehow managed to win election twice, his party suffered the loss of over a thousand Congressional, state, and governor seats.  The party, even the left grudgingly admits, was decimated; what the left is less willing to admit is that Obama’s policies—policies Americans consistently said put America on the wrong track—played a role in these stunning losses.

Ellison, however, admits that the historic nature of Democrat losses under Obama are not only part of Obama’s legacy but are also directly related to and reflective of Obama’s poor leadership of the party.

“Look I’m a great fan of President Obama. I totally voted for many of the things he supported — Dodd Frank, Affordable Care Act, Lilly Ledbetter Fair Pay Act — I could keep going,” Ellison said at an event Wednesday at the University of Minnesota.

“Wonderful achievements. But Barack Obama could have been a better party leader, and I think the fact that he wasn’t put his legacy in jeopardy,” he said.

Ellison added that Obama was “great at getting himself elected” but said he should have worked closer with party leaders to ensure the Democrats were in power to protect his accomplishments.

“Your legacy is not a building that he’s going to construct in Chicago housing his presidential papers,” Ellison continued. “His legacy is the work he’s done, which I believe is tremendous. But given we lost a lot of statehouse seats, governorships, secretary of states, his true legacy is in danger, and I think he can’t say that he wasn’t part of those losses. Who else, right?”

The Democrats had hoped not only to keep the White House in 2016 but to take back the Senate and begin rebuilding (or actually winning) a majority in the House.  None of that happened.

To be fair to Obama, he did try to rouse his coalition, even going so far as to state that he would regard a low black turnout for Hillary a “personal insult, an insult to my legacy.” In the days leading up to the 2016 presidential election, Obama’s one talent, hitting the campaign trail, was on full display.  He needled, he wheedled, he whined, he spewed lofty promises, he talked trash and stoked fear about then-candidate Trump, and he threatened that his entire agenda was on the line.

Yet Hillary—and by his own insistence, Obama himself—failed abysmally, and in doing so, drove home the reality that Obama’s inexplicable appeal to Democrat voters was not transferable to others in the party, not even to the person to whom he was “pass[ing] the baton” of his agenda and legacy.

Ellison’s criticism is not limited to last year’s presidential election.

“He should have been far more out there in 2010, which was a year when we were going to be doing redistricting. He should’ve been campaigning like he was on the ballot and should have been very visible,” Ellison said.

“He’s great at getting himself elected but should’ve worked much more closely with Congress, and I think in 2014 we had record low voter turnout … and I think that too really was a time when he needed to be visible and present and very engaged … he needed to raise money for state legislative races.”

Ellison, who supported Bernie Sanders rather than Obama’s pick during the primaries, may have stumbled upon this clear-eyed understanding of Obama’s role in massive Democrat losses in response to his position outside the Obama circle that includes Obama’s former labor secretary Tom Perez. Perez beat Ellison in a contentious battle for leadership of the DNC.

Ironically, one of the Congressional caucuses to which Ellison belongs might have made a difference in terms of saving the party from near-total decimation under Obama’s watch.  Dissatisfied by the appalling unemployment rates in black communities, then-Congressional Black Caucus chair, Representative Emanuel Cleaver (D-MO), noted that the caucus would be “marching on the White House” if only Obama weren’t black.

Instead of pressuring the country’s first black president to live up to the promises he made on the campaign trail, the CBC demurred in order to protect him from himself.  It seems that didn’t work out very well.

Hey ellis you dipsh*t, when you point your finger at obungo 4 of your fingers at pointing at the other part of the reason for the losses.

It is fun to watch a handful of democrats beginning to slowly, very slowly, realize that The Great Obama actually destroyed their party.

Welcome to 5 months ago. I really hope the Democrat Party becomes one of those snakes that starts eating its own tail

Don’t worry. They can’t crack it and will soon loose it chasing after the latest, shiny thing.

The issue isn’t directly Obama. It’s the hard left cultural political coup they tried to pull of with him as the masthead.

The question is will they be able to leverage anything off this cultural gamble? They already lost the political battle of today. Seems like they’ll be unable to retake the house and will cede more of the Senate….

So now that politics and culture have a strong divergence.. Who will break first? A strong insurgence and party in power..? My money is on the losing party and morally bankrupt culture