And, in my view, contributes to the campus bubble 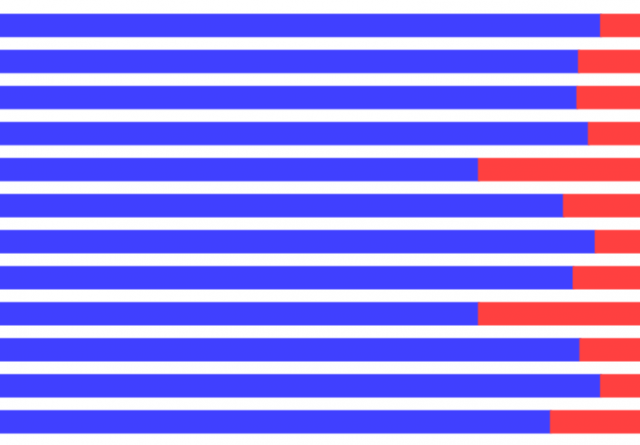 From the Department of the Obvious comes a recent research paper confirming what we already knew, law professors as a group are very liberal.

Paul Caron of Pepperdine Law School (aka TaxProf) highlights the research paper and commentary on it, bragging how BYU And Pepperdine Are The Most Ideologically Balanced Faculties Among The Top 50 Law Schools (2013).

The study is title The Legal Academy’s Ideological Uniformity (you can download it for free at the link). Here is the abstract:

Jonathan Adler, law professor at Case Western (who famously blogged under a pseudonym before he had tenure for fear of retribution by liberal law professors), summarizes the methodology at Volokh Conspiracy:

Although the authors believe that other factors explain some of the split between the ideology of legal academics and legal practitioners, even after accounting for such factors, they find that law professors are significantly more liberal than lawyers generally.

This chart from the study summarizes the findings by school: 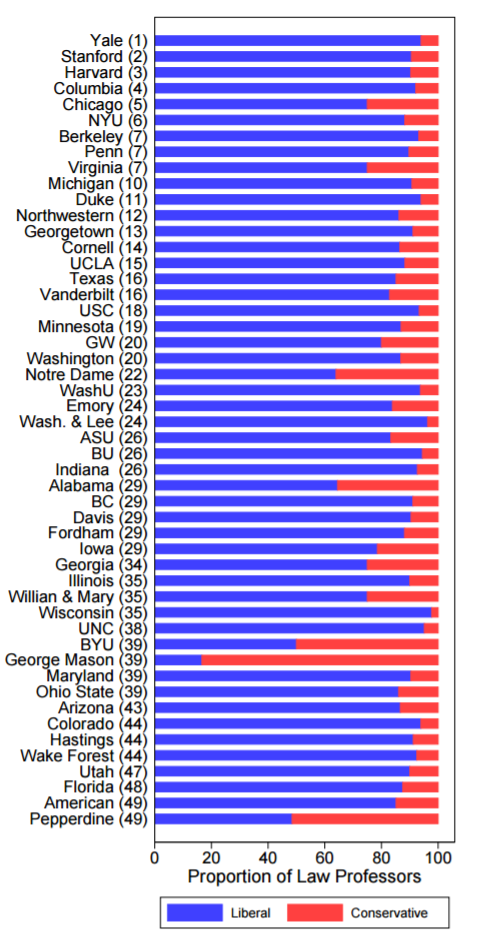 Let me test this with my real world experience for Cornell. Yup, pretty much, though this bar might understate liberal leaning:

What is the impact of such a liberal skew? According to the authors of the study, it includes marginalizing law professors:

Nonetheless, the ideological tilt of the legal academy has potentially broad implications. For instance, because law professors are overwhelmingly liberal, groups of law professors advocating for liberal positions can easily be marginalized.

For example, after Jeff Sessions was nominated as Attorney General in 2016, over a thousand law professors signed a letter opposing his confirmation. This letter was criticized by some as simply representing the views of the left leaning legal academy (e.g., Huffman, 2017; Presser, 2017). To assess the these criticisms, we match the signatories of the letter to our sample of law professor ideology, and find that only 4% of the signatories that appear in our data are conservative. This raises the question of whether the reception to the letter would have been different had more conservative law professors signed the letter. Although we have no way to answer this question, the endeavor might have been given more credence had more conservative professors participated in the letter: observers might have been less likely to expect Republican-leaning law professors to oppose Sessions ideologically, thus making such criticisms more powerful and effective.

We argue that this example illustrates that the legal academy’s ideological uniformity limits its political credibility.

One could extend this analysis to current controversies at state universities, such as proposed measures to curtail tenure or limit the activities of legal clinics and academic centers at state universities. Appeals to “academic freedom” are less convincing when the only ones in a position to benefit from such principles sit on one side of the aisle.

Writing in opposition to a proposed measure in North Carolina that would prohibit the University of North Carolina School of Law’s Center for Civil Rights from engaging in litigation, Gene Nichol suggested the center’s critics are “nakedly ideological” because they would have no problem with law school programs enlisting students in efforts to protect gun rights or religious liberty. He might be right, but how would we know? It’s not as if UNC’s law school has any such programs, or even a critical mass of right-leaning faculty members….

At Cornell, you may recall, the student newspaper The Cornell Sun showed that 97% of faculty donations went to Democrats, and a College Fix study that 11 departments at Cornell have zero registered Republicans.

What is the result?

One result is intolerance in the student body. We have seen this nationwide, including at Cornell, For conservatives at Cornell University, high price for free speech.

Another result is students and faculty living in a bubble, which burst in the 2016 election big league:

Over 50 Cornellians gathered on Ho Plaza this afternoon for a cry in to “mourn” in the aftermath of Donald Trump’s shocking presidential victory.

Braving the cold, wind and occasional rain, Cornellians sat in a circle to share stories and console each other, organizers encouraging attendees to gather closer together and “include each other.” …

Standing with students at the cry-in and nearly in tears herself, campus activities coordinator Denice Cassaro called the election’s results “devastating.”

What is the answer to excessive liberalism in legal academia. I suspect that the answer from liberal professors would be that no answer is needed, things are just fine as they are.

Apparently, ‘diversity’ isn’t strictly applied to ideology in academia. But methinks that is a feature, not a bug.

My surprise was finding Texas at number 16 – right behind UCLA at 15!

Is it any wonder ‘textualist’ judges are a rare find?

I was surprised at the number of law schools in Texas. It must really put pressure on new lawyers to find a macho nickname to use in their advertising. Note to advertising lawyers… your commercials are humorous but who wants a comedian for a lawyer.

Unsaid is that a liberal view of the law versus a conservative one is actually a poor way to teach law. Ordinary judges apply the law as written, not as it evolved in the mind of an attorney. That is the way to lose.

George Mason University School of Law, now known as the Antonin Scalia Law School, appears to be the place to be if you want to minimize tainted thinking.