For conservatives at Cornell University, high price for free speech

For conservatives at Cornell University, high price for free speech

Security fees to protect controversial speakers uniquely target conservatives since only conservatives are targets of disruption. 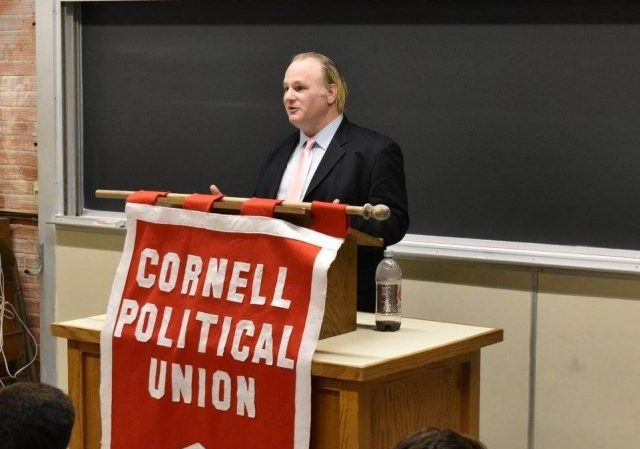 The other day I came up with a line I’m pretty happy with.

During an interview with Bill Whittle on NRA TV, I pointed out that I am “The One” at Cornell Law School, where I teach.

Whittle: And we’re speaking with William Jacobson of the website Legal Insurrection, who we should also point out is also a professor at Cornell Law School, which makes him pretty much as rare as [inaudible] out there, you must be leading a lonely life out there ….

WAJ: I am the only open conservative on our entire law faculty of over 50 law professors, so I’m not the 1%, I’m actually The One.” …

There was truth in that jest.

I pointed to a report by the student newspaper The Cornell Sun showing that 97% of faculty donations went to Democrats, and a College Fix study that 11 departments at Cornell have zero registered Republicans.

I also could have pointed to the defeat of a resolution at the student assembly asking the faculty Senate to study the issue of faculty diversity of political thought, which was defeated.

The lack of faculty diversity of political opinion is not just a theoretical matter. The increasing role of faculty in joining the “resistance” against Trump helps feed an increasing hostility towards conservatives among student activists.

Two recent speakers had their appearances disrupted by left-wing student activists who have worked themselves into a frenzy over Trump’s election. (Yes, Cornell was the location of the notorious student “Cry In” after the election.)

Last November, Rick Santorum was heckled throughout his speech, and the leader of the Cornell Republicans was physically assaulted by someone screaming about having brought Santorum to campus.

I examined the Santorum disruption in the context of a more recent disruption of an appearance by Michael Johns, one of the early Tea Party organizers and a Trump supporter, Conservative speaker event forced into hiding at Cornell:

The Johns appearance, however, came under Cornell University Police Department (CUPD) scrutiny when there were threats of disruption on social media. The CPU was given the choice of cancelling the event, turning it private so that only CPU members could attend, or paying the university a security fee of up to $2,000. Because CPU could not afford the $2,000 fee, it decided to turn the event private….

The event took place, but only after it was turned private and the location moved to a secret location not announced publicly.

Nonetheless, student protesters tracked down the location and protested outside, while demanding entry into the room.

I spoke with Johns about it, and he said the protesters were chanting, among other things, “Let us in, Let us in.” They were kept outside the room, but Johns said the chants were loud enough to make it hard for Johns to be heard. The chanting started a few minutes into his 20 minute speech and went on for the remainder. Johns believes that the event would have had hundreds in attendance had the threat of disruption not caused it to be closed to the public and moved….

Incredibly, the student protesters who forced the event to be made private under direction of CUPD then complained that the event was private….

But what bothered me the most was the university’s demand for up to a $2,000 fee to provide security after the threats were discovered. This seemed to me to be uniquely dangerous to conservatives on campus since only conservatives are likely to be targeted in this manner.

As detailed in that post, I wrote to the Interim President of Cornell expressing my concerns about the security fee being a form of heckler’s veto since only conservatives were likely to be the targets of disruption:

As someone who openly expresses views that are unpopular on this campus, it concerns me greatly that the onus of security protection was put onto the organizers of the event through a security fee. This obviously has a very chilling effect on campus speech since it amounts to a heckler’s veto over public discourse through the imposition of security fees….

Since this is a scenario which almost certainly will only suppress conservative speech on this campus, it is a matter of great importance to whether Cornell will be a welcoming place for conservatives.

Although I received a response from the communications office about the details of the event (see prior post), I did not receive a response as to my point on the security fee serving as a form of heckler’s veto over conservatives.

The Cornell Sun has an article today on the issue of security fees uniquely affecting conservative speech, The Cost of Conservatism at Cornell: Groups Claim Hosting Conservative Speakers Comes With Added Expenses:

The right to speak on Cornell’s campus is a “paramount value,” one upon which the University has an “essential dependence,” according to the Campus Code of Conduct. In fact, the administration is so committed to free speech that even finding a speaker’s cause to be “evil” would not justify suppressing that speaker — doing so, the University writes, would be “inconsistent with a university’s purpose.”

But some groups that have hosted conservative speakers on campus are not buying the administration’s rhetoric, citing the thousands of dollars they have been asked to pay the University for security at their events.

And they say it is a cost that hosts of conservative speakers disproportionately have to bear.

“The University, through its current policy — intentional or not — imposes additional financial and administrative costs on groups wishing to host conservative speakers,” said Troy LeCaire ’17, president of the Cornell Political Union. [CPU]

The Cornell Sun goes on to note that of the many speakers brought to campus by the non-partisan CPU, Johns was the only right-of-center speaker, and the only one requiring a security fee for protection, something common for Republican speakers:

Of the nearly 20 speakers CPU has brought to campus, all of these speakers — including those who, like Johns, are not Cornell professors — have been liberal, LeCaire said.

“We have hosted someone who worked in the Obama administration, a former U.S. General under President Obama, and quite specifically, two Democratic politicians from the New York State Assembly, including the Speaker, arguably the most powerful Democratic state official,” LeCaire said. “I think Michael Johns was our first speaker who could be considered right of center.”

Johns was also the first speaker in CPU’s history that came with a security fee, according to LeCaire.

The Cornell Republicans are no stranger to these fees either. Last semester, the group was charged $5,000 — an entire semester’s worth of funding — to secure the infamous Rick Santorum event, where protesters repeatedly shouted down the former United States Senator during his speech, according to Olivia Corn ’19, the group’s president.

The student Democrats have no such security fee problem:

Meanwhile, the Cornell Democrats have not payed anything in security fees to the University within the past few years, according to Kevin Kowalewski ’17, the group’s president.

“During my time at Cornell, no, the Cornell Democrats have not had to pay the [U]niversity for security at any event where we brought a speaker. We have never been informed that this was necessary,” Kowalewski said.

The Cornell Sun article sheds an important light on the structural bias of the Cornell security procedures.

Only conservative speakers are likely to be disrupted. Liberal, and even communist, speakers are safe on campus. So while on its faced the security fee policy is content neutral, in reality it targets conservatives, as the two student leaders told the Sun:

“It’s not my job to make sure the students of this University are safe. It’s the University’s job,” Corn said.

LeCaire said that the University’s policy precludes CPU from inviting the full range of speakers it would like to.

“I think we want to invite more conservative speakers. Whether or not we’ll have the capacity to is uncertain,” LeCaire said. “If Rick Santorum cost $5,000 [in security fees], there is no way we can afford to invite Rick Santorum or anyone of similar stature. So basically we’re limited to low-profile conservative people.”

I’m not hopeful that the Cornell administration will recognize much less properly address the hostile campus environment towards conservatives, and how the security fee acts as an enforcement mechanism against conservative speech.

But maybe they will surprise me.

Professor Jacobson, is there a viable legal option?

IANAL but to me even on its face the security policy is not content neutral. The only way it could be content neutral would be to require all speakers/hosts pay a set fee or have no fee at all. Any other way it is an arbitrary policy that can effectively be used to shut down content that other people don’t agree with. To be honest I would attempt to verify how neutral the policy is by threatening to disrupt the next approved/liberal speaker to see what happens. In addition if I was a student I would use the same tactics that were used against me to see if the penalties imposed where the same. Of course I would probably need a good lawyer also.;-)

Professor, if you truly are “The One”, then this blog post screams for the top picture to be changed to one of Neo.-

Perhaps the insurance model can be used here. So last year the bill was $5000 for security at all speaker events, and there were 20 speakers. This works out to $250 each. So each group pays $250 per speaker for “insurance”. Once the insurance is used entirely, all remaining events are cancelled.

My thoughts also Pablo.
Put a little socialism into this security fee. Make everyone pay a fee and laugh as those liberal protesters scream as they realize they’re forced to pay for something they disagree with. Although I’m guessing some of the protesters aren’t Cornell students and won’t care.

Could have been worse. At Middlebury College in Vermont it was. They pulled the hair and twisted the neck of a member of the faculty who accompanied a conservative speaker:

Here’s the money quote…. even when the groups ponied up the fee or met the conditions, the campus security still allows the disruptions to continue unhindered and diminished the value of the speaker’s messages….

“the protesters were chanting, among other things, “Let us in, Let us in.” They were kept outside the room, but Johns said the chants were loud enough to make it hard for Johns to be heard. The chanting started a few minutes into his 20 minute speech and went on for the remainder.”

” Last semester, the group was charged $5,000 — an entire semester’s worth of funding — to secure the infamous Rick Santorum event, where protesters repeatedly shouted down the former United States Senator during his speech,”

This just shows how pathetic the leftism really is…. as a veteran I have been mocked by these whinny little kids that think they know everything, but have no fricken clue how the world really goes around….. I am glad that Donald Trump is our President and I can tell you I will stand with him 10000% we have had to deal with the PC group for far to long it is time us conservatives and real people take our country back!

[…] William Jacobson, law, who has written about Cornell’s security fees on his conservative website, Legal Insurrection, said the […]