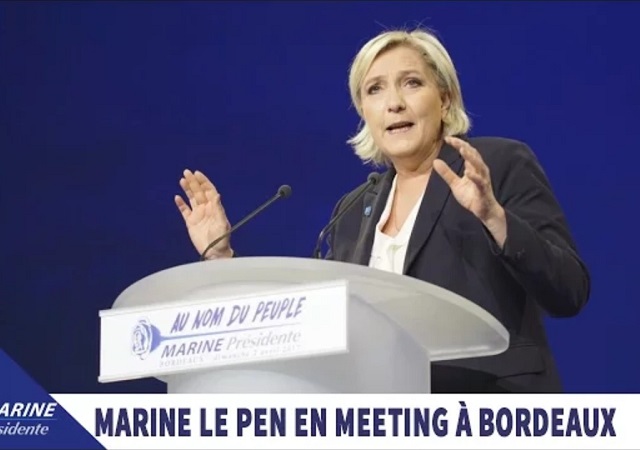 As France heads to the first round of presidential elections on Sunday, Front National’s candidate Marine Le Pen vows to put an end to the Open Borders Policy for illegal migrants. “Mass immigration is not an opportunity for France, it’s a tragedy for France,” Le Pen told her supporters. “The French sometimes have fewer rights than foreigners — even illegal ones.”

Defending her campaign promise to take France out of the European Union, Le Pen said, “France has the right to regain its national sovereignty, its freedom to decide for itself.”

Ahead of Sunday’s vote, most polls show Le Pen and centrist Emmanuel Macron running neck-and-neck with each candidate securing between 22 and 24 percent of the votes. Meanwhile, conservative François Fillon and communist Jean-Luc Mélenchon have consolidated their positions and could cross the 20-percent mark.

According to French election rules, if no candidate manages to get 50 percent of the votes in the first round, which is most likely this time, the top two candidates face each other in a second run-off. Le Pen and the centrist Macron are expected to make it to the second round of the presidential election scheduled for May 7.

The two frontrunners in the French presidential election, far-right leader Marine Le Pen and centrist Emmanuel Macron, staged rival rallies in Paris on Monday, seeking to stay ahead in a tightening race just days before the vote. (…)

After weeks of twists and turns, the unpredictable race has narrowed dramatically, with surveys suggesting four candidates are in contention to win one of the top two spots in the vote next Sunday and progress to the run-off a fortnight later.

Scandal-hit conservative Francois Fillon and radical leftist Jean-Luc Melenchon are steaming up behind the two frontrunners, and with around one in four of the electorate still undecided, candidates are scrapping for every vote.

Macron and Le Pen, who have both scored as high as 25 percent in voter surveys, stood at 23 percent and 22.5 percent respectively in the latest Ifop poll updated daily, while Melenchon has surged to 19.5 percent, equal with Fillon.

Since the E.U. opened its borders to mass-migration, France has been hit by a wave of Islamist attacks involving mass shootings, stabbings, and vehicle ramming incidents. In January 2015, Islamist terrorists broke into the editorial offices of French magazine Charlie Hebdo, killing 17 people and injuring 22 others for the ‘crime’ of publishing cartoons depicting Prophet Muhammad. Ten months later, a group of Islamists staged coordinated attacks across Paris, killing 130 people and injuring more than 350 — out of which 89 concertgoers were executed inside Paris’s Bataclan theatre. In July 2016, more than 80 people were murdered and over 400 injured when a terrorist ran a large cargo truck into crowds celebrating a national holiday on a popular promenade in the city of Nice. The attack was carried out by a French-Tunisian Islamist.

Front National’s Le Pen is the only candidate in the French Presidential fray who understands the threat posed by mass immigration from Arab and Muslim countries. “We do not want to live under the rule or threat of Islamic fundamentalism,” Le Pen said earlier this year.

According to a poll result published by the broadcaster France24, 86 percent of the Front National voters “no longer feel at home” in France and 73 percent considered Islam incompatible with the country’s republican constitution.

To those in the European political establishment and media trying to put positive spin on open border migration, Le Pen quipped that French citizenship should be “either inherited or merited.”

“I would decide on a moratorium on all legal immigration to stop this frenzy, this uncontrolled situation that is dragging us down,” Le Pen promised French voters this week. She vowed to scrap the E.U. mandated Open Borders Policy and replace it with “much more drastic, more reasonable, more humane, more manageable rules” on migration.

Given the vitriolic campaign by the media and the European establishment against Le Pen and Front National, she will face an uphill battle securing the absolute majority in the second and final round scheduled for next month.

She is not the only candidate that “understands the threat posed by mass immigration from Arab and Muslim countries.” Unfortunately, the other one is the actual Communist in the race who, for similar reasons, is surging in late polls.

EU was originated by France to dominate Western Europe and the divided Germany. Now, a re-united Germany is dominating France. No longer serves the French purposes.

Le Pen…probably the first thing I’ve ever liked about France.

The anti-nativists will have to find another place to hide victims of CAIR (Catastrophic Anthropogenic Immigration Reform) and other effects of social justice adventurism. The abortion industry will find it more difficult to obfuscate the massive loss of life in abortion rites and to meet the demands of clinical cannibalism.

So, the Populist, who represents the interests of the French people, a champion of the average citizen, is “far right”, but the Socialist is a “centrist”? LOL!

What a colossal failure for the EU if France really exits. How could they come back from that? That’s like fifty years of political centralization just flushed away. But honestly if I was still there I’d vote for Le Pen without a second thought.

They’ve already admitted millions of Muslims, who are a huge fifth column and potential standing army of occupation. I’d argue it’s too late unless she channels Charles Martel and expels them. Erdogan is making noises about conquering Germany, which the old Ottoman Empire never accomplished. Does anybody doubt that if the Turks in Germany try something that their Muslim counterparts in France won’t join them?