We are all Charlie now. 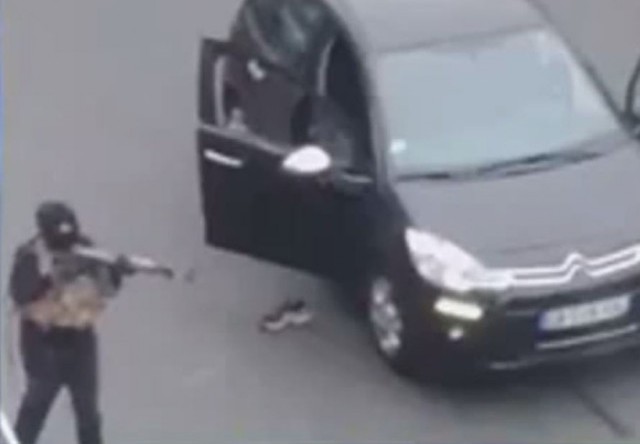 There was an attack on a French satirical publication, Charlie Hebdo, using automatic weapons and a rocket-propelled grenade, killing 12. The killers are at large as of this writing.

Masked gunmen with automatic weapons opened fire in the offices of a French satirical newspaper on Wednesday in Paris, the police said, killing 12 people and then escaping in a car.

President François Hollande said the attack on the weekly, Charlie Hebdo, was “without a doubt” an act of terrorism and raised the nationwide terror alert to its highest status. He said that several terrorist attacks had been thwarted in recent weeks….

A senior French prosecutor said the victims included two police officers, including one assigned to guard the newspaper’s offices and its top editor. The second officer was shot and killed as he lay on the ground, the police said….

[A] United States official noted that, according to social media reports, the attackers did refer to the Prophet Muhammad, saying he was “avenged.”

Charlie Hebdo had a long history of conflict with Islamists, as The National Post reports:

Charlie Hebdo first attracted the attention of Islamists in February 2006 when it reprinted 12 cartoons depicting the prophet Mohammed that had initially been published in the Danish newspaper Jyllands-Posten.

The Charlie Hebdo cover read “Mohamed overwhelmed by fundamentalists” and featured a cartoon of Mohamed covering his face and saying, “It’s hard being loved by idiots.”

That edition led to an unsuccessful lawsuit against the magazine by two French Muslim organizations under the country’s anti-racism law.

In 2011, Charlie Hebdo’s offices were destroyed in a firebombing after it announced a special “Charia Hebdo” edition with Mohammed as guest editor. The cover featured a cartoon of the prophet saying, “100 lashes if you don’t die laughing.”

In 2012, as violent protests flared around the world over a low-budget Internet film mocking Mohammed, Charlie Hebdo announced its intention to publish more images depicting the prophet. The French prime minister at the time issued a statement calling for “everyone to behave responsibly,” but the editor of Charlie Hebdo, Stéphane Charbonnier, was adamant.

“We publish caricatures every week, but people only describe them as declarations of war when it’s about the person of the prophet or radical Islam,” Mr. Charbonnier told Der Spiegel. “When you start saying that you can’t create such drawings, then the same thing will soon apply to other, more harmless representations.”

Mission accomplished! MT @Zoefffzoefff "The future must not belong to those who slander the prophet of Islam"-@BarackObama #CharlieHebdo

Can't sleep tonight, thoughts with my French cartooning colleagues, their families and loved ones #CharlieHebdo pic.twitter.com/LqIMRCHPgK

In Fight Against Extremism and in Defense of Freedom of Expression; Today we too are #CharlieHebdo! #jesuischarlie pic.twitter.com/SJw26844e8

PM Netanyahu to the French people: All of Israel stands with you on this difficult day 2/2 #CharlieHebdo

Well done Berliner Zeitung. Germany shows some balls. Every newspaper should have gone with this. We're not afraid. pic.twitter.com/FMfyeyIXm7

How long will it take for the UN to condemn Israel for causing this attack?

…in 2012, as violent protests flared around the world over a low-budget Internet film mocking Mohammed….

I love how the NYT and the MSM are perpetuating this myth – STILL! (I saw nearly the same language on an MSN article linked by Drudge.)

This is Islamo-fascist TERRORISM!! Muslims like these have declared WAR on Western society. Until the Western nations accept, acknowledge, and stand up against this nightmare-reality, we will have such horror, such tragedies continue – and escalate.

Of course, the administration didn’t acknowledge this was an act of terrorism – let alone Islamist terrorism – until much later……talk about a nation of cowards! (Or are they secret sympathizers, given their anti-Israel, pro-Iran foreign policy….?)

It should be interesting to see their reactions when they or their family member is eventually ‘visited’ by the likes of these murderers.

These film clips are obvious fakes. In France, as in the UK, only the police and the military have guns. Europeans cannot arm themselves. Mordor is wise and all knowing.

Because of feckless/gutless politicians these murders will be excused. Because they were committed by Muslims. These pols are as responsible for the murders as the murdering Muslims themselves. Not unlike the “What do we want? Dead cops” protesters in NYC.

Now we have, yet once again as in Fort Hood (2009), as in Boston (2013), and countless other places outside the USA, more murdering Muslims who do as they will in the name of their Islam.

Expect now the predictable, super-annealing use of the Muslim EXCUSE Machine, familiar to every counter-jihad reader, to be kicked into high gear, with its sole purpose being to invent reasons why an obvious Muslim attack is not a Muslim attack. “Who are you going to believe, us or your lyin’ eyes?”

Allahu Akbar all other the place, but the J-I-M words are never used in officialdom or in the MSM. Jihad. Islam. Muslim.

Nothing grabs one’s attention like being hit on the side of the head with a 2 by 4. And from all appearance it will take more Muslim attacks against infidels with the loss of Western lives before more necessary lessons about Islamic ideology are learned.

The left is smiling today.

RE: In France, as in the UK, only the police and the military have guns.

It is my impression, from what I have read so far, that the French assigned UNARMED police to guard a major terrorist target. The police were obviously counting of the innate respect for authority shown by most terrorists.

The truth of the matter is that, in many parts of Europe, the police are only occasionally armed.

Yep, it looked like the cop on the sidewalk was unarmed, and he appeared to be attempting to follow the guidance provided by our Progressive Overlords for situations such as this… cower on the ground, assume the fetal position and soil yourself. A lot of good it did him.

That unarmed cop who was executed was a Muslim!!

If I understand correctly, the first two to show up were unarmed police on bicycles. SMH.

French “youths” are at it again.

We are nations of cowards for not having a frank discussion about the Crusades.

Stupid autocorrect! That would be DONCHA know!

Every newspaper and magazine, throughout the civilized world, should print whatever was deemed “offensive” on the front page every day month.

videos already being pulled.
got some self hosted
http://www.theconservativevoices.com/topic/86086-charlie-hebdo-videos/

Various of the videos have been and still are up at LiveLeak. Never trust YouTube for things like this.

liveleak takes stuff down too, the beheading vids were.
thats why I upload to my own server.

And the White House says its not sure it’s terrorism? Good Grief!!

Islam is incompatible with western civilization.

Do not forget Zombie as a resource:

Should have listened to Brigette Bardot…

Islam must radically reform or be radically excised. The former looks more and more like an impossibility.

Will Hillary Clinton (“We will make sure that the person who made that film is arrested and prosecuted”) volunteer to arrest any survivors?

Did the Charlie Hedbo offices have no security whatsoever? The terrorists are dead worng, of course, but the magazine must have known they were coming sooner or later, especially having fire-bombed them previously. Every report I’ve seen said they just walked in and started shooting, that is, met zero resistance. Poking a bear with a stick does not confer upon the bear the right to kill you, but you probably ought to prepare for the likelihood the bear will try.

One of the two cops killed was security for the publishing house, according to what I’ve read.

At present the word is that the terrorists forced an employee – a mother with her daughter – to let them in, after she punched in the entry security code.

Also, the police sent to “secure” the known-terrorist target were UNARMED! Like a terrorist who decides to attack won’t be?!?! WTF is in the minds of these progressives/socialists?! (Rhetorical question.)

We can only hope that this will show the world the idiocy of both disarming the police and the public AND the danger of unchecked Islamofascist terrorists.

Tangential Q: Based simply on the common sense aspect, what cop agrees to serve without a weapon? I mean, the best soldier in the world knows better than to go to battle unarmed. Is this an example of political correctness overruling basic common sense even when the stakes are existential?

It was a dark comedy, watching unarmed first responders “run away”.

It also provides an unassailable argument (IMNHO) for “militarized police”…or those up-armed and trained above regular cops.

A National Guard response would be laughably too late under our system.

Did Obama call to condemn the French leaders as bitter clingers and such? Bomb France into submission and establish an Islamic state.

The terrorists were just implementing Sharia blasphemy law. Nothing to see here.

Speaking of satire, the headline reading “Charlie Hebdo attack will fuel Islamophobia” takes the cake. The sad thing is it isn’t satire, they really mean it.

I read about that UK Imam who was tweeting all over the place that “They deserved it”. Are there no MEN left in England who will ask “Will no one rid me of this turbulent priest?”

I read about that UK Imam who was tweeting all over the place that “They deserved it”. Are there no MEN left in England who will respond to “Will no one rid me of this turbulent priest?”

“To determine the true rulers of any society, all you must do is ask yourself this question: Who is it that I am not permitted to criticize?” — Voltaire

I tried watching Lone Survivor last night for the first time. I’ve listened to the audiobook and loved it. I had to turn the movie off. It was too much.

Watching America’s best getting sent out there under resourced with these stupid ass ROE against an enemy that will do anything and everything to destroy us and our way of life was too much. I’ll try again and again and watch it, but I’ll hate it.

We just don’t effing get it. We are confronting evil. It’s time for rough men to do hard things. Things that make our stomachs turn because we are a moral society. But its passed time; overdue.

When a rabid dog bites, you don’t give it a hug and try to understand its feelings. You put it down.

Nobody tell John McCain that we are all Charlie!

‘The enemy of my enemy is my friend.’ – Arab proverb

And we can see who the ‘friends’ of these terrorists are.