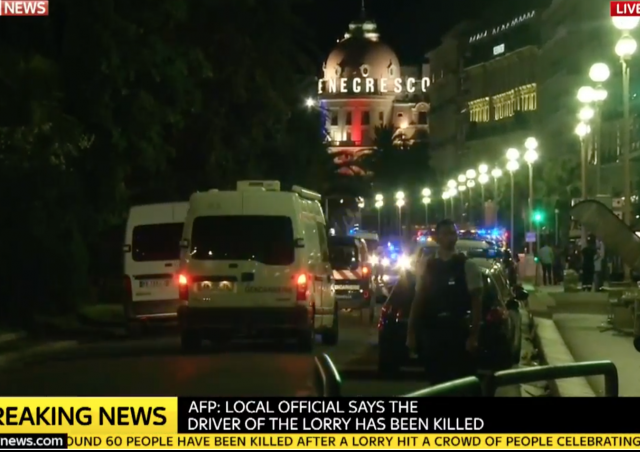 American media reports as many as ten dead, but foreign outlets have reported as many as 73.

Latest updates at bottom of the post; refresh for most recent coverage.

Local police say the incident was an attack:

And some reports indicate gunfire was exchanged:

CNN affiliate BFM: There was exchange of gunfire between truck occupants and police in Nice

Nice’s Mayor says tens are dead and has advised others to stay home:

Driver killed, one suspect unaccounted for:

#Nice witness: Truck “crushed everyone in its path.” Then 2 men got out of the truck “and started shooting into the crowd, about 50 shots”.

.@BretBaier: French Interior Ministry spokesman says there is no hostage situation at the moment in #NiceFrance. pic.twitter.com/QUZMZNfwwy

Not a unique way to attack, but Nice is by far the most deadly:

Locals helping out other celebration goers:

As happened in Paris last year, people are offering shelter to people unable to go home in Nice with #PortesOuvertesNice #AttaquesNice

ISIS is claiming the attack:

The deputy head of Paris Match says ISIS has claimed responsibility for the attack in Nice, France

JUST IN: The death toll in #NiceFrance attack rises to 80, per French President @fhollande. #KellyFile

BREAKING: Christian Estrosi, president of the region, says the truck in Nice was loaded with arms and grenades.

U.S. Consulate issues warning; cannot yet confirm whether any Americans were killed or injured:

We have no information at this time to indicate that U.S. citizens were injured or killed in the attack today in… https://t.co/v51eK2OZ2c

There are no words:

Starting to get bits of info about the driver:

The Daily Mail reports the driver yelled ‘Allahu Akbar’ before being killed by police.

BREAKING: French authorities say they have found ID in truck that belongs to Frenchman of Tunisian background

Our of respect for the victims of this horrific attack and their families, I’ve chosen not to post video of the truck ploughing through the crowd.

Must have been a high-capacity assault truck.
Time to ban them.

Tsk, tsk! Nobody wants to confiscate your trucks. But all reasonable people can agree that common sense truck reform is a topic that we need to address as a people.

Does common sense reform mean that Ford will build trucks for GM so they can sell a decent product?

How much more “Religion of Peace” can we take? Can anyone imagine what a big heavy dump truck could do to a full school bus on its way to the school house? It’s time to stop all of this banning and confiscation BS and start making the FBI and the CIA do their jobs. With jug ears in the WH and lyin loretta at the DoJ I guess we’ll just have to wait another 6 months before any help arrives.

The “righteous” say that attacks will never sway us from being who we are….. but then pill on TSA, DHS, bans here and there, instituting parts of Sharia law, to temporize and deflect. It’s a plane, a truck, a gun…. they never ever come to grips with the people doing this and their ideology. It works in Nice, it can work at any large parade.

Love will not defeat or stop terror.

James Taylor singing ‘you’ve got a friend’ will not stop terror.

France learned nothing from the attempted train massacre, Charlie Hebdo, and nightclub massacres.

One thing we learned when GWB was in office is that a righteous, pissed-off and fully-supported US military DOES stop terror. Stops it cold and puts it in the ground, six feet under where it belongs.

I’ve summed up the last sixteen years and two administrations thusly: Under Bush our friends laughed at him and our enemies feared him; unfortunately under Obama the exact opposite is true.

From what I’ve heard they are up to their Obama’s in muslims.

Or, if you are Westboro “Baptist” “Church” people: homos.

Must be because of the settlements.

And, Diversity is a Strength!

In France, aren’t the “settlements” the Zones Urbains Sensibles?

My thoughts are with the misaims who will suffer the non-existing backlash for this terrorist attack.

FBI Director Comey just said that the driver was extremely careless, but did not actually intend to kill anyone in the crowd.

Meanwhile a whole bunch of people are concerned there will be a ‘backlash’ against Muslims over this.

For fucks sake enough with this bullshit. Muslims are the problem. Christians, Buddhists, Jews, Satanists are all not engaging in large scale mass casualty terror attacks. Only ONE RELIGION does that.

If this had happened in America Trump would be leading by 10+ points within 2 weeks.

I sincerely hope that there is a backlash. They have shown themselves to be – at best – a poor fit in virtually any civilized society.

Olinser, it pains me to say this, but Orlando/San Bernardino, the sequel is coming soon to a neighborhood near you.

Sadly, the our country has moved its capital to Davos and the Globaloney crowd doesn’t care about body parts belonging to somebody else. HRC and her crew have no real nationality, except at election time, and have no problem with dead Americans, some of whom will vote Democratic in any case.

The dead are known to resurrect themselves at election time to vote democrat which is how I interpreted his comment.

As most audits of polls suggest, the Democrats have a large constituency among the dead.

It’s crony socialism’s new frontier, once they’re done with bathrooms and illegal aliens: Enfranchising the dead. Officially. No more monkey business. Bring the dead out of the shadows. Put them on a path to citizenship, because the dead will do the jobs and vote the votes that Americans won’t do.

I’ve thought long and hard of the “Nuke Medina” strategy. Upon reflection, this would only play into the goals of the Wahhabbis and Sunnis of destruction of monuments and the Shiia’s goal of returning the 12th Imam after Armageddon.

How about a little humanity here?

I appreciate SOME gallows humor as much as the next guy, but would you be making some of these comments on the Profs’ blog if the attack had been in Israel?

Part of the plan of evil is to dehumanize the violence, to make nonchalance and everyday, to diminish it’s horror. Some jokes need to be left for private forums.

The theme of Obama’s next press conference will be the Chico Marx line from DUCK SOUP (1933):

“Well, who you gonna believe, me or your own eyes?”

Ottis: Medina is a great hostage but the problem is in Rakka and Mosul. That’s the immediate issue.

1. Suspend the Obama ROE that has DoD lawyers supervising every shot.
2. Erdogan gets an ultimatum: we use Turkey for logistics or he faces financial and trade sanctions. No more Bush 43 bull where Turkey is allowed to block the 101st from entering through Northern Iraq.
3. Put a division around Rakka. Screw the NGOs, screw the UN’s phony baloney interventions, bar all media–blackout. Any ICC action against U.S. forces will be deemed Audi g and comforting the public enemy, warrants issued, and extradition demanded for ICC judges or prosecutors.
4. Besiege and squeeze. Civilians into temporary camps until each military aged male/female is vetted. ISIS membership or collaboration is an ipso facto war crime.
5. Now comes Mecca. The SAs helped fund the problem and they need to pay us for the clean up. They also need to organize a Sunni stability force for post Rakka.

What is there to say. Probably there will be another attack and another and another while we debate and are saddened but what really changes for the better?

What changes? Maybe a new President, one not quite so slavishly devoted to the fantasy that Islam is a “religion of peace”, might be a positive change.

For the US, at least. For France, probably not much is going to change for the better.

Catastrophic Anthropogenic Global Warring (CAGW) was an imminent threat. Illegal progressive wars, opportunistic regime changes, and generally anti-native policies have consequences. And this all started with a premature evacuation of honest brokers from Iraq. Related, I wonder why Gaddafi was brought to trial through torture, sodomy, and abortion. It just doesn’t pay to repent and reform.

Where is the backlash? I want a backlash. Something less exuberant than a Vlad Țepeș-worthy house-cleaning, but only a little. There is absolutely no evidence whatever that absent this Moslems are capable of policing themselves or behaving in a fashion that is compatible with a world in which anyone with pretensions to civilisation would wish to live. The cost of committing atrocities is insufficiently high to compel a change in behaviour in the population from which the terrorists gain so much succour.

Why do they always say “such and such claims credit for this or that attack”?

They should say they know who did it but not give them the publicity that they crave and demand.

Don’t announce who supposedly was behind the attack.

Call them dogs and filth and that they will soon be paid back but don’t give them “credit” for killing people.

I am okay with announcing who “claimed” the attack as long as our response to them changes to something like the following:

Isis has claimed responsibility for this attack. In response our bomber wing launched several hours ago and this footage is of those planes arriving over their stronghold.

Obama has instructed the Department of Justice to call the latest attack in Nice “Road Rage” and forbidden the use of Islamic terms in dealing with the attack.

Obama also declared that since the driver of the truck had a driver’s license, that all persons in the US with a driver’s license should be forbidden from owning or possessing a fire arm. Obama called the of such people “fringe drivers.” We must get guns and vehicles out of the hands of these folks immediately.

Hillary suggests that since her plan for for dealing with Islamic terrorists in the US is to never pronounce their name and to give them love, then citizens should alternatively invest in teddy bear and body bag manufacturers.

Officials are not sure what the truck driver’s motive was. “He was such a normal-seeming person,” said his neighbor, Abdulaziz Mohammed. He last encountered the police when he was questioned about recent foreign travels, but they found his explanation that he was visiting his sick grandfather good enough. “Who could have figured this would happen?” said Gendarme Escargot, head of the 14th Prefecture. The driver’s name and photograph are not being released for unknown reasons.

I think what this comes down to is scale. The French attack is so large that it CANNOT be ignored by the mfm.

Attacks in Israel generally happen as one offs so the mfm can ignore them because the stories themselves will just be drowned out by everything else happening around us.

This is a catastrophic failure of French security. The French are still in denial regarding Islamic terrorism. They must be willing to accept a few deaths here and there in order to continue the normality of life for the majority of Frenchmen. I hope this is a wake-up call.

The single picture above of the dead French mother and her infant (with baby doll) should be plastered all over by the Media in France.

Wake the hell up, France. If it’s not too late, already.

This is a prime example as to why America needs to ban Islam or at the very least treat it like the Japanese do. Because of it you do hear of Islamic attacks in Japan!

“Oh, I do hope there isn’t any Muslim backlash!” -a liberal’s first thought