Lee accuses Cuomo of “absurd manipulation” of what he said 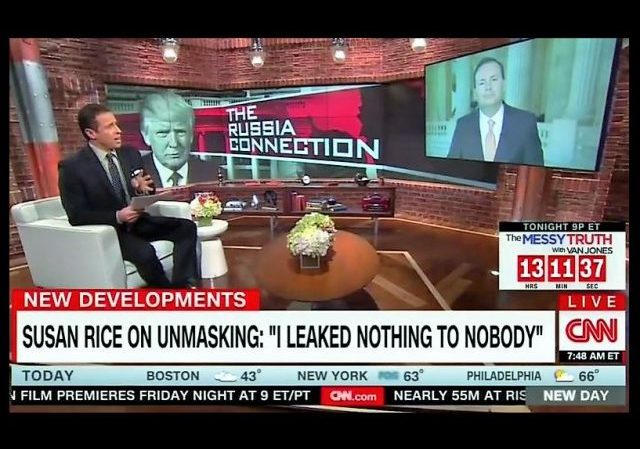 On CNN this morning, Chris Cuomo said to Republican Senator Mike Lee of Utah, “Breitbart is using you as a poster boy. You know that is the president’s viewing of choice. He loves to see what they put out. They are using you as the poster boy that Susan Rice was politically motivated in unmasking.”

Cuomo told Lee, “it does seem as though you’re saying Rice has to prove it wasn’t politically motivated for me to believe that it wasn’t. And that’s not fair.”

The Breitbart article cited by Cuomo supports Lee’s version. He is quoted as saying “The senator said he was unfamiliar with the details of the Rice story or the evidence presented to link her with unmasking Americans in intelligence reports.”

Note: CNN’s bias is pervasive. Beyond Cuomo’s misrepresentation of Lee’s remarks, have a look at the screencap: a photo of President Trump looms behind with the legend “The Russia Connection.” Throughout the interview, the chyron contains Rice’s protestation of her innocence: “I leaked nothing to nobody.” But the question is not whether Susan Rice leaked, it is who was unmasked and why. The MSM has seized on the possible leaking as a straw man and a distraction.

Sidenote: throughout the hour, CNN almost constantly displayed the countdown clock for Van Jones’ show this evening. Because the world breathlessly needs to know, down to the second, how long we must wait before Jones imparts his wisdom.

My opinion of Lee just took a dive! If he is stupid enough to go on this cnn dummy’s show then he deserves to be embarrassed.

I see it quite differently. I see him as having the courage to go anywhere. He’s not afraid to confront imbeciles and liars like Cuomo.

That would be very nice if had thought about his answers before he went on. He seemed to expect fair treatment and when he didn’t get it acted surprised. Would you go on Matthews show? Or Don Lemon? There is no way for you to show how brave you are because they won’t let you.

Coumo has such interesting body language. It’s like the guy is on adrenaline and cocaine. Is there a medication for low blood pressure? It’s like he’s overdosing on it.

Sen Lee needs to up his game a little bit. Getting baited by Cuomo is pathetic.

Each day seems to be continual proof of Trump’s claim that CNN IS the opposition party.

Well, I’m sure none of the liberal media outlets have ever done that before…

Rice’s protestation of her innocence: “I leaked nothing to nobody” is a double negative meaning “I did it.”

notamemberofanyorganizedpolicital in reply to jwoodatty. | April 5, 2017 at 1:33 pm

What a Giant Freudian Slip!

DaveGinOly in reply to notamemberofanyorganizedpolicital. | April 5, 2017 at 6:48 pm

notamemberofanyorganizedpolicital in reply to DaveGinOly. | April 6, 2017 at 10:41 am

Cuomo told Lee, “it does seem as though you’re saying Rice has to prove it wasn’t politically motivated for me to believe that it wasn’t. And that’s not fair.”

Putting aside that that’s not what Lee said, let me ask: Why not?

Susan Rice is basically claiming self-defense: “Yes, I did it, but it was justified and not malicious.”

When you invoke self-defense, the burden shifts to you to prove all the elements of self-defense, and the state merely has to disprove one of them.

Translated to Susan Rice’s situation: If it was justified, how, exactly, was it justified? Figuratively speaking, right now she’s standing over a crime scene with a smoking gun in her hand, and has admitted to being the one who pulled the trigger. Responsibility is established: she is guilty unless she can show her actions were justified.

By claiming such justification exists, she has transferred the onus of proving it onto herself.

@Archer: When you invoke self-defense, the burden shifts to you to prove all the elements of self-defense, and the state merely has to disprove one of them.

No. When you invoke self defense it’s not up to the person claiming self-defense to prove it, it’s up to the accuser to prove that it’s not. That’s why self defense is typically called an affirmative defense.

My guess is what she did is technically legal, but not ethical.

[T]echnically legal, but not ethical.

This phrase seems to describe a lot of leftists’ … erm … “extracurricular activities”.

What – no report on what that hack Morning Rino said?

We should go on these shows – if we have the will of Donald Trump.