Over 1000 academics have signed a joint statement co-authored by BDS supporter Cornel West, but count me out. 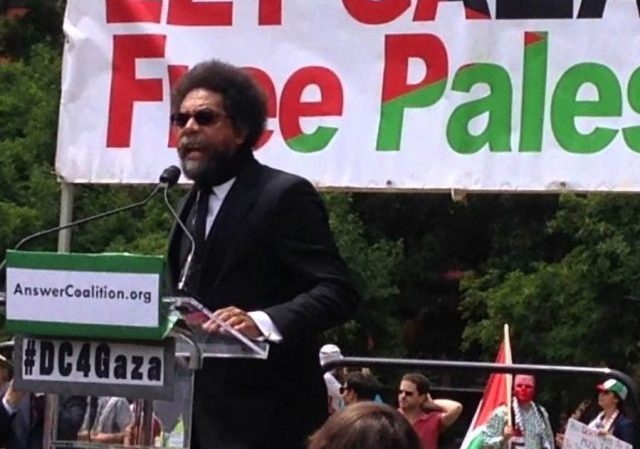 A series of high profile attacks on conservative speakers on campus has created great controversy, even among many academics on the left.

The scenes of physical assaults, incendiary projectiles fired at the student center, and bonfires lit at UC-Berkeley to stop an appearance by Milo Yiannopoulos’ gained media attention and raised questions about free speech on campuses. When a mob shouted down Charles Murray at Middlebury, physically assaulted his faculty host, and then jumped on and blockaded their getaway car, there was a howl of condemnation.

The Middlebury incident in particular sparked much soul-searching in academia.

The scenes at UC-Berkeley and Middlebury may have been shocking to many people, but not to those of us who support Israel. We have seen this movie many times before.

One of the responses to the Middlebury incident was a joint statement from two Princeton University academics, one on the right and one on the left, in support of free speech and free expression on campus.

On the right was Prof. Robert George. I’ve never met him, but many people over the years have told me I really need to meet him, that we would have a lot in common.

On the left was Prof. Cornel West. I’ve also never met him, but we have written about him a number of times over the years, particularly his support for the BDS movement. Most recently, he was in the news as a Bernie Sanders delegate to the Democratic National Convention Platform Committee, where he again proclaimed his support for BDS during debate over provisions related to the Israeli-Arab dispute.

The statement Profs. George and West co-authored now has been signed by over 1000 academics. It is titled Statement on Truth Seeking, Democracy, and Freedom of Thought and Expression and was released on March 14, 2017. The statement has been highlighted in many publications, including The Atlantic:

Another visible reaction came from Robert George, a conservative professor from Princeton, and Cornel West, the liberal professor at Harvard, who issued a joint statement championing free speech. The statement, which received thousands of signatures from fellow educators, reads as a direct response to the Middlebury incident. “All of us should seek respectfully to engage with people who challenge our views,” the authors write. “And we should oppose efforts to silence those with whom we disagree—especially on college and university campuses.”

You should read the full statement. Here is an excerpt:

The pursuit of knowledge and the maintenance of a free and democratic society require the cultivation and practice of the virtues of intellectual humility, openness of mind, and, above all, love of truth. These virtues will manifest themselves and be strengthened by one’s willingness to listen attentively and respectfully to intelligent people who challenge one’s beliefs and who represent causes one disagrees with and points of view one does not share.

That’s why all of us should seek respectfully to engage with people who challenge our views. And we should oppose efforts to silence those with whom we disagree—especially on college and university campuses….

So someone who has not fallen into the idolatry of worshiping his or her own opinions and loving them above truth itself will want to listen to people who see things differently in order to learn what considerations—evidence, reasons, arguments—led them to a place different from where one happens, at least for now, to find oneself.

All of us should be willing—even eager—to engage with anyone who is prepared to do business in the currency of truth-seeking discourse by offering reasons, marshaling evidence, and making arguments. The more important the subject under discussion, the more willing we should be to listen and engage….

It is all-too-common these days for people to try to immunize from criticism opinions that happen to be dominant in their particular communities. Sometimes this is done by questioning the motives and thus stigmatizing those who dissent from prevailing opinions; or by disrupting their presentations; or by demanding that they be excluded from campus or, if they have already been invited, disinvited….

I have no problem with the substance of the statement. Under other circumstances I might even sign in support.

But I cannot do that considering that one of the co-authors — Cornel West — violates the very principles set forth in the statement through his support for the academic and cultural boycott of Israel.

Such systematic boycotts, the American Association of University Professors has held, are a threat both to academic freedom and free expression:

The Association recognizes the right of individual faculty members or groups of academics not to cooperate with other individual faculty members or academic institutions with whom or with which they disagree. We believe, however, that when such noncooperation takes the form of a systematic academic boycott, it threatens the principles of free expression and communication on which we collectively depend.

It is for that reason that over 250 university presidents and numerous university and higher ed associations have condemned the academic boycott of Israel.

You need look no further than the guidelines for the academic boycott published by the US Campaign for the Academic and Cultural Boycott of Israel (USACBI) to understand how stifling that boycott is to free speech and free expression on campuses.

Here are just some of the interactions and appearances that are forbidden to Israeli Universities or their faculty representatives as to interaction with or on U.S. campuses:

Specifically, the following events, activities, or situations are in violation of the Palestinian academic boycott:

(a)    Among academic institutions – Institutional cooperation agreements with Israeli universities or research institutes. These agreements, concluded between international and Israeli academic institutions, typically involve the exchange of faculty and students and, more importantly, the conduct of joint research.  Many of these schemes are sponsored and funded by the European Union (in the case of Europe), and independent and government foundations elsewhere.

(b)    Among the Israeli government and other governments or foundations/institutions.Researchers in such projects could be based at U.S., European or other universities.

(c)    Among corporations and academic institutions – Research and development activities on behalf of international corporations involving contracts or other institutional agreements with departments or centers at Israeli universities….

As you can see, the academic boycott seeks a complete exclusion of Israeli universities and faculty representatives from expressing their speech on U.S. campuses. The claim that BDS does not boycott individuals is ludicrous – if you are so thoroughly refusing to interact with a university, you are by definition refusing to interact with its employees, faculty and staff.

The guidelines for the cultural boycott similarly are onerous.

Prof. West should be familiar with these guidelines. He not only has formally endorsed the boycott, he is on the Advisory Board of USACBI.

Given this program of shutting out Israelis and Israeli speech from U.S. campuses, it is no wonder that BDS protesters so regularly and vigorously seek to shout down and shut down Israeli and pro-Israeli speakers.

Because BDS stands against everything the statement on freedom of expression purports to stand for, and because one of the co-authors supports and is a leader of BDS, I will not sign it.

Emails to Profs. George and Cornel seeking comment have not been returned.

West is the posterboy of affirmative action.

Good to know you have emailed the principals, Prof., because my first reaction was to say this might be an opening for opening West’s mind. I wish more people could see the contradictions here.

West’s mind is incapable of opening, because all leftist political blacks are expected to hate Jews intensely – West personifies this perfectly. If anyone doubts that, try to name one exception.

“Leftist” is the key word here.

I was recently talking with a Christian black lady coworker at work. She was talking about her lifelong Democrat (and Christian) father who is now in his eighties and still going strong.

Somehow we got on the topic of past presidents and she said her father really disliked Jimmy Carter.

President Carter is in many ways a typical old-school Democrat so I was a bit surprised at first, until she added:

“Yep, Dad sees Jimmy Carter as anti-Israel and that is a complete deal-breaker with Dad. Dad can’t stand Jimmy Carter because of President Carter’s hostility towards Israel.”

It saddens me that many (albeit mostly left-wing) Jews view Christians at best with almost complete contempt.

What my coworker said showed yet again that Israel–and non-Israeli Jews who view their Jewish heritage as an important part of their identity–have no better friends in the world than American Christians–of all colors.

If I were Jewish, I would be quick to requite (as Prof. Jacobson and many other right-of-center Jews do).

It doesn’t make sense to snub potential friends … especially in light of a history when friendship proffered by people outside the tribe has been so very rare.

But, of course, Jews with seemingly suicidal tendencies concomitantly often regard their Jewish heritage as being comparatively far less important to their identity.

They’ve taken assimilation to a distorted and dangerous dimension.

Prof. J: For no other reason but your statement made, you should have that recommended conversation with Prof. George. I would be very interested in reading your recap and point of view on the reasons he chose to sign this joint statement with Prof. West. It reek’s of hypocrisy given the fact that Prof. West still strongly advocates for BDS demonstrations which foster boycott protests and create the hostility and personal attacks as he attested in by his signing.