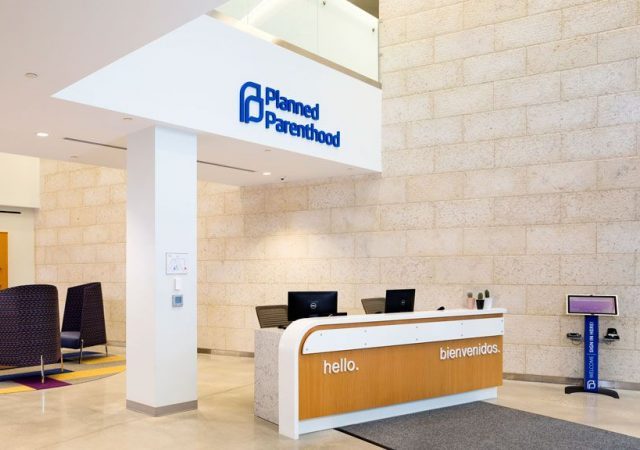 The Washingtonian took a tour of the “swanky” new office concluding “the Carol Whitehill Moses Center is the most thoughtfully designed of all the organization’s facilities nationwide.”

Judging by the photos (taken by Stacy Zarin Goldberg), you’d think you were in a swanky library or Google headquarters, not an abortion mill. And that was intentional.

Nothing about the location is sterile or even clinical. Instead, it’s cute.

Just take a look at the waiting room: 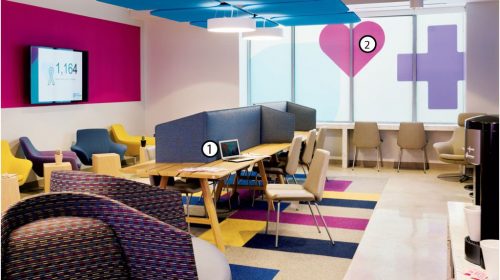 Which the Washingtonian described as:

1. Planned Parenthood of Metropolitan Washington CEO Laura Meyers wanted patients to feel as if they were in a combination Apple Store, Starbucks, and Anthropologie: “Some want to experience the space alone—sit with their laptop or phone. Others may want to experience it communally.”

2. The building was designed by Form Architects. Large windows let in natural light but are covered with film for privacy.

The greatest threat to Planned Parenthood is truth. When people learn how gruesome abortion is, even in the earliest stages of pregnancy, they quickly question why the outpatient “procedure” as it’s so often described, is so broadly promoted.

It’s why the videographers who exposed Planned Parenthood’s dead baby part market are receiving the full force of political judgment.

Pretending abortion is cute doesn’t change what it is — the legalized murder of an unborn life.

Just take a look at the waiting room:

Looks like a place where children would have a lot of fun.

With advancing age, I find myself in quite a few medical waiting rooms, and I notice that they’re pretty much all full of toys.

Guess there’s not much call for those here.

Well, I am glad it is a lot cleaner than the world that Trump would have the born live in; as he dismantles environmental regulation.

That world doesn’t look cute and it isn’t.

BTW, the AHCA was going to take away health care from millions. Do ya think any of then were babies? Just askin’

Is your appearance on LI like a Masters Thesis project or Brown Belt as you work your way to full RedPeril status, or did you fail at communism and are stuck in the lower ranks? Is success in socialism defined as moving up or moving down?

I my healthcare plan costs $2,000/month and comes with a $6,000 deductible do I really have health care coverage?

I’ll just assume that there’s no photos of the procedure room or the biohazard containment suite.

Never saw any operating room that didn’t involve blood and biohazard materials. Do you plan to ban all operations?

BTW, most abortions don’t involve an operating theater at all.

It’s true that all surgical procedures are messy. It’s also true that the others are designed to save a life, not end one.

You are out gunned, here, moron! Oh, was that a micro-aggression, snowflake? Should I have said out-brained?

To be fair, I do find myself wishing most of the PP group had had mothers who deeply believed.

Many of them did have mothers who deeply believed. Apparently, you don’t understand what ‘planned’ means. I would explain, but I am sure you prefer your ignorance and false sense of superiority.

I warned you! You’re looking stupider and stupider!

Orange truly is the new black

So tell me. Would we be better off if abortion was handled by the Black Market?

If they really cared about women, why would they block every state law which requires safety and cleanliness inspections of their “clinics”. Just like other “medical care” providers must do.

If they really cared about women, why would they block every state law which requires safety and cleanliness inspections of their “clinics”. Just like other “medical care” providers must do.

Fortunately Black Markets don’t supply any of those amenities either.

BTW the purpose of those laws is to return abortion to the Black Market. Which makes the supporters of those laws de facto in league with the criminals.

BTW I favor private actions to reduce the number of abortions. Once you hand it over to the government you will always have enough abortions to justify government involvement.

MSimon says:
BTW the purpose of those laws is to return abortion to the Black Market. Which makes the supporters of those laws de facto in league with the criminals.

1- BTW your statement is a lie. You offer no proof, just a projection of your smugness and hatred.

2- the back alley abortion argument lost traction with the arrival of effective, inexpensive and readily available birth control. Women have the ability to prevent conception that they didn’t have in the 50’s. Used responsibly, it would eliminate most of the abortions we see today. Responsible behavior works to prevent conception, not avoid its consequences. If women had to flock to the back alley, it would be mostly because of their own behavior.

3- the argument that legal abortion is necessary because women would be harmed if they broke a law banning abortion is morally bankrupt. It is the same as arguing that bank robbery should be legal to prevent bank robbers being shot while committing the crime.

We would be better off if people took responsibility for their actions before the fact, not after. Abortion is the single most hypocritical act I can think of. To deny that child its right to life after you irresponsibly conceived it is the height of selfishness and denial. You want what you want but the heck with that little human you just created. Soulless. Heartless. Selfish. Criminal. Read Dr. Nathanson’s book, “The Hand of God.”

Dr. Nathanson was the director of the Center for Reproductive and Sexual Health in New York City. In his two years in that position, he oversaw some 60,000 abortions. In addition, he performed some 5000 abortions with his own hands in private practice, and supervised residents in training who performed another 10,000 abortions.

In The Hand of God, Dr. Nathanson writes, “I have aborted the unborn children of my friends, colleagues, casual acquaintances, even teachers” (p.61). He also aborted his own child. He writes, “Yes, you may ask me…[W]hat did you feel? Did you not feel sad — not only because you had extinguished the life of an unborn child, but, more, because you had destroyed your own child? I swear to you that I had no feelings aside from the sense of accomplishment, the pride of expertise. On inspecting the contents of the bag I felt only the satisfaction of knowing that I had done a thorough job. You pursue me: You ask if perhaps for a fleeting moment or so I experienced a flicker of regret, a microgram of remorse? No and no. And that, dear reader, is the mentality of the abortionist: another job well done, another demonstration of the moral neutrality of advanced technology in the hands of the amoral” (pp.60-61).

I assume you believe the mentality of Black Market abortionists will be an improvement.

The typical response from the small brained baby killers.

In 1943, you’d have been muttering, “Well, liquidating Jews is a dirty, but important, job. That’s why we need the SS.”

Going after Jews wholesale was a government program.

Freelance Jew killing was minor compared to that.

What amazes me is that so called “smaller government people” can only imagine government solutions. That shows you how far the rot of socialism has spread.

Going after Jews wholesale was a government program.

Freelance Jew killing was minor compared to that.

A distinction without a difference. The reprehensible act is the gov’t’s sanctioning the killing of innocents. Whether gov’t kills directly or by proxy is immaterial.

Oh, the irony—a heart, the purest symbol of love–on the window,

Money – the single largest source of revenue for PP.

Is it really about womens health?