“I think she’d lose so badly” 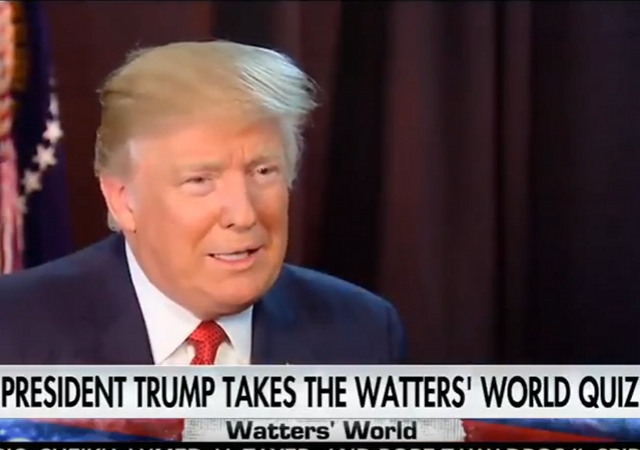 The 2020 election is still way off but Trump has already made it clear that he’d love for the Democratic Party to nominate Massachusetts Senator Elizabeth Warren.

Trump: Elizabeth Warren running against me would be ‘a dream’

President Trump said in an interview broadcast Saturday night that Sen. Elizabeth Warren (D-Mass.) launching a presidential bid against him would be “a dream come true.”

“I think she’d lose so badly,” Trump said during an interview on Fox News’ “Watters’ World.”

Trump claimed Warren, a top surrogate for 2016 Democratic presidential nominee Hillary Clinton, “was getting up with that craziness and that anger” in speeches on the campaign trail.

“I think she hurt Hillary Clinton very badly,” Trump said. “I watched those speeches – the anger, the hatred, in her heart – and I said, ‘Ya know, she’s really bad for Hillary.'”

“Pocahontas would not be proud of her as her representative, believe me,” Trump continued, resurfacing his campaign trail nickname for the Democratic senator.

Fox host Jesse Watters suggested that Warren, who is among several Democratic senators often floated as a possible 2020 contender, is “probably going to run against you.”

“I hope so,” Trump responded. “That would be a dream come true.”

This could be a real thing. The Boston Globe is already asking the question:

Could Elizabeth Warren win back ‘Trump Democrats’ in 2020?

To understand the challenge facing Elizabeth Warren and other Democrats as they chart a path out of their Trump nightmare, you can’t do much better than to spend a few minutes with the amiable fellow in a diner booth in blue-collar Pennsylvania, as he tucks into a plate of eggs-over-easy and sausage and ponders Donald Trump.

John Randazzo is a registered Democrat who twice voted for Barack Obama, whose 2008 visit to the Avenue Diner near Wilkes-Barre is memorialized with a plaque and a special red stool at the counter. In 2016, Randazzo was among Rust Belt defectors who helped put Trump in the White House — the sort of voter who prompted the president to boast last month that he was giving the GOP a rebirth as the “party . . . of the American worker.’’…

Asked about Warren, Randazzo suggested that the Massachusetts senator, who is arguably the Democrats’ highest-profile advocate for the working class, is out of touch and lumped her in the same category as the entrenched House Democratic leader, Nancy Pelosi.

“Her and Pelosi, they’ll never get my vote the way they’re acting,” said Randazzo. “They are completely the opposite of what Donald Trump stands for. He says one thing, they disagree and it’s the other thing, and it’s ridiculous.”

Frankly, I think Warren destroyed her brand with the left by endorsing Hillary. Additionally, Warren may be able to win in a state like Massachusetts, but Democrats overestimate her appeal on a national stage.

Did the rodeo clown show Obama being shot in the head?
No.

The “rodeo clown incident?” You mean the “incident” where progressive jack-offs cried like little bitches until a guy lost his job over something that has been done to every POTUS in memory? That incident? Progs are such whiny little bitches.

Yeah never mind there is video of the same guy wearing both a Bush AND Clinton mask at previous rodeos – and apparently he’s done Nixon and Reagan before, as well.

But OMG RACIST HE PUT ON AN OBAMA MASK.

“Screecher!, The Sequel”. Because America loves screeching old dykes. They wear so well on the public’s patience during these long election cycles.

Imagine Warren in a nun’s habit and holding a ruler and you’ll know why she’ll never be elected Prez: she looks like every Catholic school kid’s worst nightmare.

Would be a dream come true for our dear professor too, that is if he’s ever dreamed about truly helping to absolutely destroy a Dem presidential candidate.

She would be a natural sequel to the Dems failed attempt to elect a woman for the sole sake of being a woman. With new and improved corruption!!

Call me old fashioned, but if a woman’s greatest accomplishment is having a vagina I’d prefer it in a nicer looking holder.

I think a little perspective is called for.

For Trump yes it would be a dream come true, Warren would be one of the easiest oppents to run against.

But I also keep in mind that for Democrats Trump as a Republican nominee was “a dream come true”. How did that work out?

And Trump won’t have the underdog card to play any more.

The media ran the underdog card for Obama before term 1 and it worked too well for him.