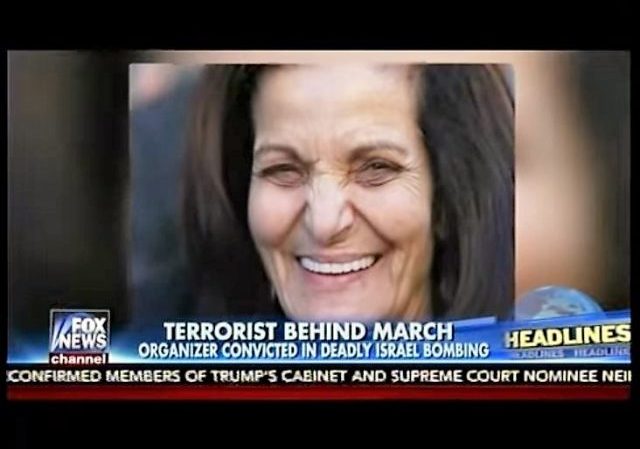 Snopes developed a reputation as a highly reliable debunker of internet hoaxes. It was one of the first sources I used to turn to.

Now I find it often reads more like PolitiFact, a supposedly neutral fact checker that seems to lean left, or at least often seems to have a political angle on a fact check.

I had noticed a change in Snopes a while ago, and even considered writing about it earlier, but Snopes coverage of Rasmea Odeh pushed me to a response.

Rasmea has been in the news lately because of her involvement in launching the March 8 so-called Day Without A Woman.

Rasmea’s involvement has generated a lot of publicity because of Rasmea’s conviction in the 1969 bombing of the SuperSol supermarket in Jerusalem, which killed Edward Joffe and Leon Kanner.

See my prior post regarding the evidence of Rasmea’s involvement, and how her claim that she only confessed after 25 days of sexual torture is demonstrably false. In fact, Rasmea confessed the day after arrest and there is independent evidence of her guilt. Among that evidence is the recorded interviews of her co-conspirators in recent pro-Palestinian documentary films.

Snopes decided to cover the issue, One of the Organizers of ‘A Day Without a Woman’ Strike Was Convicted of a Terrorist Bombing. 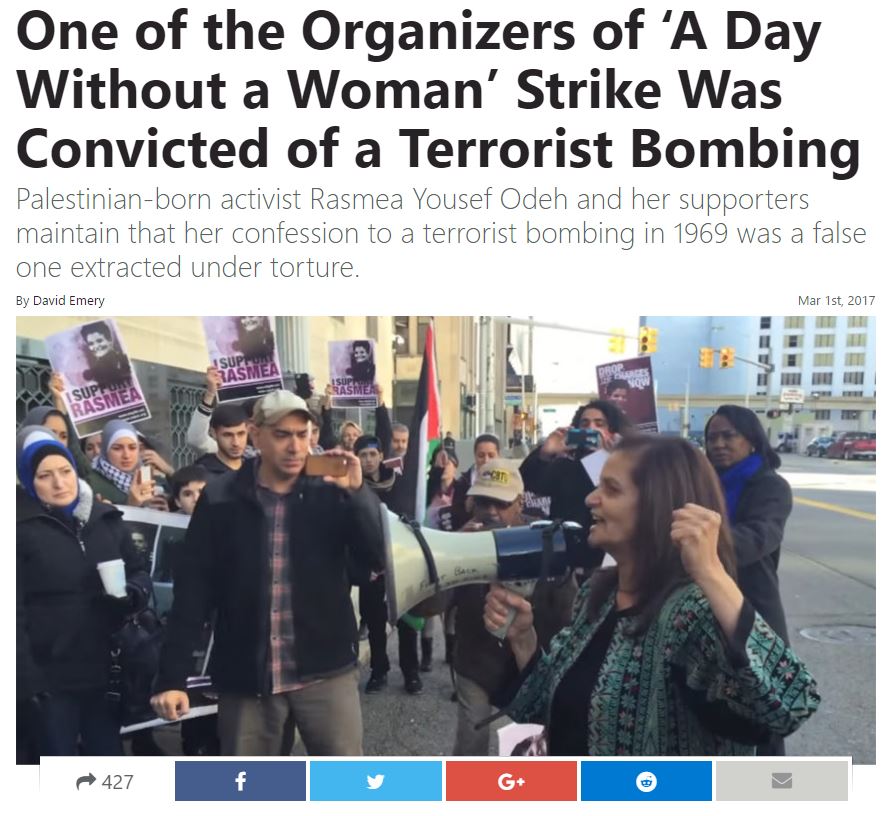 When I first saw the Snopes entry, it was beyond shallow, consisting mostly of an article in The Hill in defense of Rasmea by Josh Ruebner of the U.S. Campaign To End The Israeli Occupation (recently rebranded as the U.S. Campaign for Palestinian Rights). The U.S. Campaign is so toxically anti-Israel that it couldn’t find a single congressman to sponsor a U.S. Campaign event on Capitol Hill, causing the event to be cancelled.

Ruebner himself is a notorious anti-Israel activist who even has accused Senator Chuck Schumer of being an “Israel Firster,” a widely criticized anti-Semitic slur suggesting American Jewish supporters of Israel are disloyal to the U.S.

We know from records that narrative is not true and that Rasmea in fact confessed after just one day. That’s important because it goes to the veracity of the confession. It also ignores all the other evidence of her involvement. I’ve never taken a position on what happened to Rasmea in prison, only that the 25 (or 45) day narrative is contradicted by demonstrable evidence.

So I tweeted at both Snopes and the Snopes author informing them that the Snope coverage was weak and ignored evidence contradicting Rasmea’s defense.

.@snopes your coverage of Rasmea Odeh is shallow, read here for actual facts and documents debunking her defense https://t.co/zEssmYPoLt

Snope did expand the coverage somewhat, but still leaves the Ruebner article as the main entry in the article, without noting the contrary evidence as to Ruebner’s claims in the article. Ruebner’s background is not described.

This was proven when I saw this Facebook comment by a women troubled about participating in the March 8 protest because of Rasmea’s involvement. That woman specifically cited Snopes as potentially exonerating Rasmea: 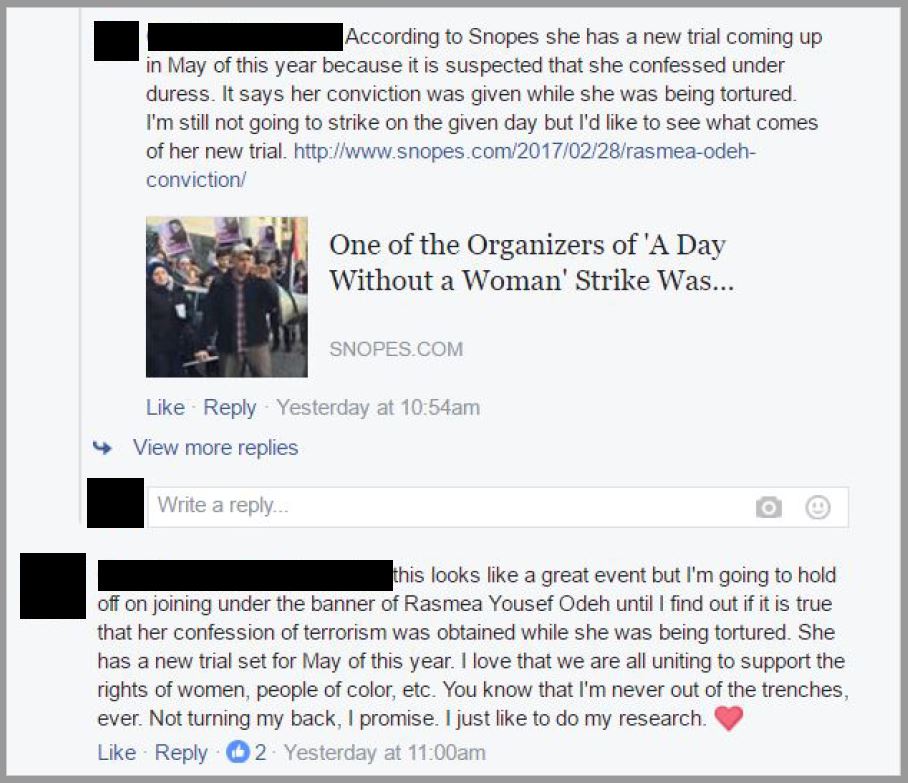 I hope Snopes sees this and further expands its coverage, including the facts debunking Rasmea’s defense.

Not for my benefit, but for the benefit of people like that woman on Facebook who rely on Snopes.

Snopes and politifact have been liberal shills for a while now. Both sites will put political spin on their facts checks, when applicable.

That question seems to have been a very old one; Roman Poet Decimus Iūnius Iuvenālis (commonly known as Juvenal) asked the question in the 1st/2nd Century A.D, ‘Quis custodiet ipsos custodes?’ “Who will watch the watchmen?”

Stopped trusting Snopes a couple of years ago, and have been steering everyone I know away from there since.

As obama and his minions found out, once your word is lost it is lost forever. People like hillary, Ben Rhodes, Biden, Holder, Lynch, obama and almost all who were in his administration, have lost their good names except for the sensationalism of them. No one believes them any longer on anything of substance. I hope Trump realizes this and makes sure he has the facts before spouting off.

they are no more reliable than the the SPLC or anyone else in the #MFM.

for giggles, search “snopes divorce” for some juicy dirt on the founders

How is it the left seems to always find the dregs of society to represent their greater views???

I made the determination years ago that Snopes was nothing more than a tool of the left. Multiple recent articles are confirming this.

Changing the narrative by using “alternative facts” is nothing new. Not sure why the media got so giddy about Kelly Ann Conway using that term recently. It’s almost a tradition for the media to make accusations or draw conclusions that later don’t hold up. And it’s why retractions are late and so hard to find. It allows the original inaccurate claims to look true in the future.

In the Islamic world it’s, “Everyone eventually submits to the Caliphate.”. That’s a Char Char Binks original.