Is the person in Congress sanctioning this forum aware of the extreme background of the U.S. Campaign? 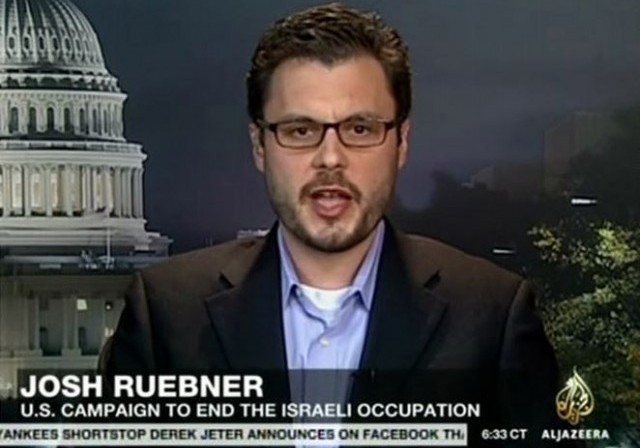 The Free Beacon broke a story today about how The U.S. Campaign to End the Israeli Occupation is holding a forum on Capitol Hill supporting the anti-Israel Boycott, Divestment and Sanctions movement, Congress to Host First-Ever Forum in Favor of Boycotting Israel:

Congress is scheduled to host what insiders described as the first-ever forum in favor of boycotting Israel, according to congressional sources and an invitation for the event being circulated by an anti-Israel organization.

The briefing is scheduled to take place Friday on Capitol Hill and will feature several speakers known for their criticism of Israel and support for the Boycott, Divestment, and Sanctions movement, or BDS, which has been cited by Jewish organizations as an anti-Semitic movement.

The event is being sponsored by the U.S. Campaign to End the Israeli Occupation, a pro-BDS organization that recently came under fire when it hosted a Democratic member of Congress who referred to Israeli settlers as “termites.”

Senior congressional sources with knowledge of the event told the Washington Free Beacon that the Capitol Hill office in charge of reserving the event room would not disclose the name of the lawmaker sponsoring the event. 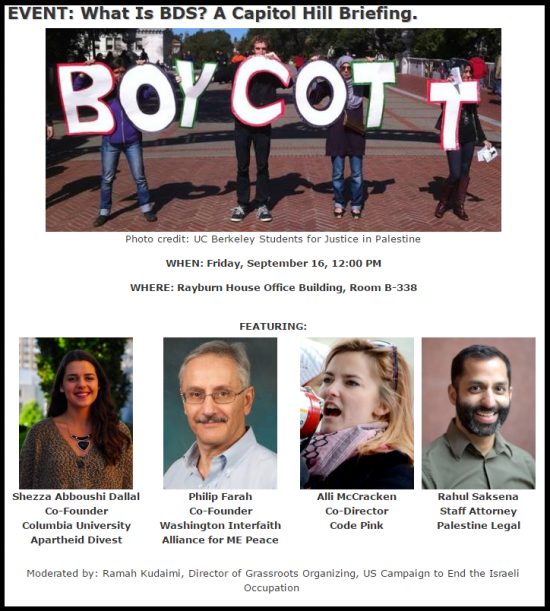 The U.S. Campaign is so uncompromising, so vitriolic and so biased, that the United Methodist Church assembly recently voted to seek withdrawal from the U.S. Campaign coalition:

In an unexpected move, the United Methodists decided on Tuesday to call on the church’s mission agency to withdraw its membership in the U.S. Campaign to End the Israeli Occupation(USCEIO).

Based in Washington, D.C. the USCEIO is a vehemently anti-Israel umbrella organization for the boycott, sanctions, and divestment (BDS) movement. Its main goal is to end “all U.S. support and aid” for Israel.

he vote to cut ties with the pro-BDS national coalition could have far-reaching repercussions if it ends up serving as an example for other progressive mainline churches in the U.S., which in recent years have enlisted in a propaganda war against Israel.

And the irony is certainly delicious: USCEIO has been anticipating that 2016 would be “the biggest year yet” for church divestment and was spearheading a publicity campaign to ramp up support. For some months it had been encouraging people to sign petitions, and follow and ‘like’ the efforts of BDS member groups within these liberal Protestant churches via emails and social media.

When I saw the Free Beacon story, I wondered if whoever in Congress sanctioned this event is aware of the U.S. Campaign’s background, and also that it’s most visible spokesman used the anti-Semitic “Israel-firster” slur against Senator Chuck Schumer.

We reported on that slur when Josh Ruebner, Policy Director for the U.S. Campaign, came to Cornell for a training session for local BDS activists, GreenStar boycott group trainer hurls “Israel-firster” slur at Schumer

Josh Ruebner, whose father was Israeli but who was born and grew up in the U.S., was one of the founders of the group that eventually became the nationwide Jewish Voice for Peace.

Ruebner now is the policy director for the U.S. Campaign to End the Occupation, whose website provides training materials and advice for anti-Israel boycotts….

Ruebner, however, uses terminology that alleges supporters of Israel are not loyal to the United States.

In a column in The Hill in 2013, Ruebner described attendees at the American Israel Public Affairs Committee (AIPAC) conference, as “thousands of ‘Israel-first’ citizen lobbyists…” 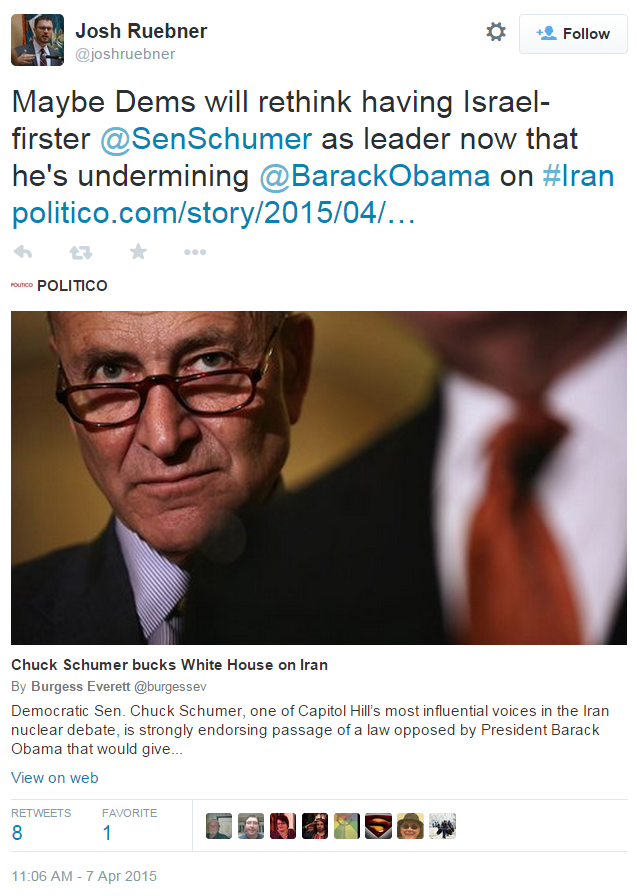 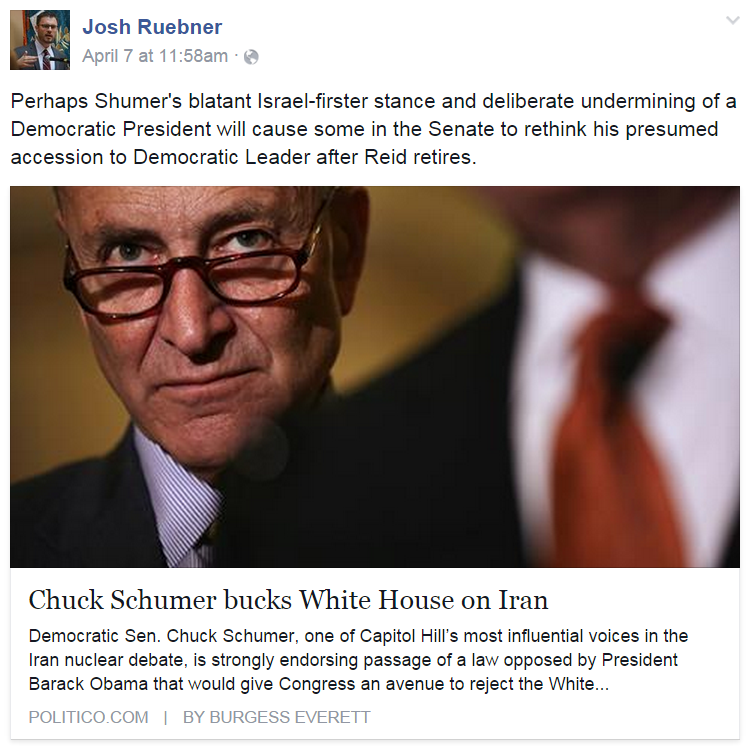 In my prior post, I traced the history of “Israel Firster” as an anti-Semitic slur. Here’s an excerpt:

If Ruebner merely were criticizing Schumer or Israel supporters, it wouldn’t be a big deal. Even if he did it aggressively.

But the use of the term “Israel-Firster” or similar verbiage has a notorious and shameful history.

The term almost always is used only against Jewish supporters of Israel.  (Though I have seen it used against non-Jewish supporters.) Considering that the clear majority of Americans support Israel, that’s a pretty selective use of the term.

It’s a play on the ages-old anti-Semitic smear that Jews are not loyal to their home countries.

In 2012, Prof. David Bernstein explained the origin of the term in the U.S.:

The “Israel-firster” slur was not used in “mainstream” discourse until the last few years.

Before that, you can find it occasionally in the early 1980s and 1990s in sources such as Wilmot Robertson’s anti-Semitic Instauration journal, a 1988 anti-Semitic book called “The F.O.J. [Fear of Jews] Syndrome, and a 1998 anti-Semitic book “Rise of AntiChrist.” I also found a couple of references to “Israel-firsters” in the extremist anti-Israel publication, The Washington Report on Middle East Affairs, and from writers associated with this journal.

By the early 2000s, one can find “Israel-firster” being used by a variety of anti-Semitic “right-wing” sources like DavidDuke.com and the Vanguard News Network. As the decade wore on, the phrase occasionally pops up in far left anti-Israel sites that have ties to the anti-Semitic far-right or are known for playing footsie with anti-Semitism, like Antiwar.com, Norman Finkelstein’s website, and Indymedia.

In 2012, James Kirchik writing in the left-wing Haaretz newspaper, A case of leftist ‘McCarthyism’?, also delved into the history of Israel-Firster accusations:

One of the most notorious newspapers ever published in America was The Spotlight, founded in 1975 by white supremacist Willis Carto…. The Spotlight, which thankfully ceased publication in 2001, wasn’t just concerned with falsifying history. When not questioning the existence of the gas chambers, it focused on the “Jewish lobby.” And its writers had two terms for describing U.S. Jews and their activism on behalf of the Jewish state: “dual loyalists” who were for “Israel first.”

I urge you to read the full history of the “Israel-Firster” slur used by Ruebner.

Whoever in Congress is sponsoring the U.S. Campaign event also needs to read it.

Somebody freaking knows who’s sponsoring this conflab at our capital, and THAT has to be ferreted out.

That HAS to be public information.

I’m hoping these liberals a**holes get into a total war within the democrat party and it implodes and takes the bdser’s with them.
I cannot fathom how stupid the electorate can be to not understand who our staunchest ally in the middle east really is.
Presidente odingleberry can’t leave the office soon enough.

Look at the 4 speakers featured: 3 apparent Arab/Muslims (one possible Christian Arab?) (by name) and a tool of the crypto-communists Code Pink.

Beyond the attitude towards Israel, neither of these groups are known for their love of liberal democracy and America.

Rags: You’re right, it is known, and, in the days when we had a press worthy of the name, that fact would be subject to some real reporting.

No more. There are a handful of white congresspersons likely to do this; far more among the Black Caucus. What is depressingly familiar is the involvement of professional Jew Washer Joshua Ruebner.

I donno if Keith Ellison would have the stones, but…

Yeah, Ellison would be my go to guy here but I share your sentiment about his lack of batzim. He’s more of a co-signer than he is primary debtor.

NOW is it OK for me to link terrorism to Islam? Because at least I can be factual. And, for instance, cite chapter and verse of the Quran and the Hadith and Sirah that will tell you exactly where the Islamic State is getting its ideas.

Or is this a “It’s OK to insult the Joooooz*” a one way street?

*I mean no insult to Jews. I mean insult to the brain dead Jooooo haters.

I would wager that it is a member of the CBC…possibly Hank Johnson, who was present during the Israel-bashing forum during the Democrat convention.

The citizens of this country are entitled to know which of their representatives is involved. Stand up and be counted, you cowardly bastard.

I thought in spite of Obama the US still considered Israel an ally. Apparently I was mistaken, why else would Congress support an event proposing a boycott?

[…] Ruebner, the campaign’s policy director, has faced additional criticism for calling a Jewish member of Congress an “Israel firster,” a slur that implies Jewish […]