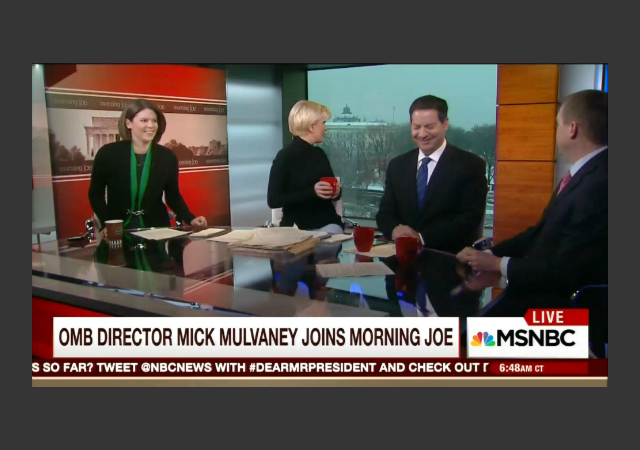 If you haven’t seen OMB Director Mick Mulvaney in action, do yourself a favor and watch the video here. On today’s Morning Joe, Mulvaney showed himself to be smart, well-spoken, undefensive and down-to-earth as he systematically demolished Mika’s, and by extension, the CBO’s, claims about the Trump admin’s health care proposal.

Before Mulvaney appeared, the panel had engaged in extended hand-wringing over the loss of coverage that the CBO has projected. Mulvaney made three telling points:

Note: as the winter storm in DC could be seen swirling in the background, Mulvaney began with a light-hearted jab: “happy to be here on a beautiful warm, sunny, day. According to the Congressional Budget Office, it’s sunny and 74 outside.” The screencap shows Mika turning to check the accuracy of the CBO weather forecast, as Kasie Hunt and Mark Halperin share a chuckle.

Really solid … another great Trump hire and a great interview.

“the CBO predicted that 24 million people would be covered today under Obamacare exchanges. The true number: 11.5 million”

So if they make error’s on Trumpcare in the same direction?

If there was a plan to deal with pre-existing conditions, the rest sorts itself out.

I do like the Rand Paul bill – here is a synopsis:

Oh my Mike trying to appear informed and tough. Not very good at either.

But it is always amusing to see someone with a brain make Mika look even stupider than usual. Not that she needs any help.

I want “repeal and replace”, too. It’s what we were promised.

I’ve heard this bill as “a good first step”, and I’m OK with that if-and-only-if other steps follow. However, the GOP has a well-earned reputation for not following through, so I strongly suspect this bill is it no matter what they say.

If this is the end of what we get, I’d be happier watching ObamaCare implode; that failure is all on the Dems. Once a new healthcare bill passes, the GOP owns whatever happens, so they should make damn sure it’s going to do the job.

I think the CBO believes their predictions are fact. They’re basically predicting that all 24M people who should have gotten coverage under ObamaCare will lose it. That reality never quite played out that way isn’t a factor.

notamemberofanyorganizedpolicital in reply to Archer. | March 14, 2017 at 5:37 pm

They achieved approximately only 47% of their self professed goal.

Give them their “F” and expel them….

Separate employment, health care, insurance and welfare. These are four distinct issues and deserve to be treated as such.

I don’t care if employers contribute to employee’s health insurance, but that policy must be entirely owned and controlled by the employee. The employer should have no say at all concerning the coverage,

Health care should be provided by doctors and hospitals to individuals and the individuals should be responsible for the payment for such services. All treatment plans are decided by the doctor and the patient. All health records belong to the patient and should not be shared with any entity aside from hi doctor.

Health insurance benefits should be payed directly to the insured; not the hospital and not the doctor. Each policy should describe in detail the types maximum costs of the provided coverage.

There are 7.5 billion people in this world who need health care; there are very real limits upon the health care that can be provided. The USA cannot afford the costs of health care for its own citizens; that’s why ObamaCare is failing.

These costs and limits must be made known to all citizens, especially to those who have made no effort nor taken any steps to provide health care for themselves.

To separate out employment and insurance – the new bill needs to get rid of the employer mandate of anyone with 50 employees has to provide insurance. Change the FTE requirement and let the employer decide the hours of its employees.

Both of these requirements are hurting growth of the small business. It is probably healthier for a person to work 40 hours at one job than trying to get the same hours/wages from multiple sources.

Why not give the employer the option of how to pay for services – perhaps some may want to contribute to a HSA and let the person buy their insurance or pay directly for care. OR even pay a higher wage in lieu of health care or pension.

But, I would argue whether Medicare (old age health insurance) is a welfare program. After all, I have been contributing a percentage of my salary for many years in anticipation of “buying” the insurance at that time. And Medicare does not pay for everything – one needs to buy additional insurance to cover the deductible and co-insurance portions. And just like regular insurance, people are denied services or there are limits to the amount of service (limited days in a hospital, rehab or nursing home)

To really separate out employment and insurance, the unique tax benefits to employer provided medical insurance must be removed. As long as its paid by employers with untaxed money, it will be a drag on people changing employment. It’s also completely unfair to those that pay their own insurance with after-tax dollars.

Jonathan Gruber was right about one thing: No one trying to set up insurance statutes sensibly would have ever tied employment and medical insurance together to begin with. It distorts insurance markets and labor markets.

The only way the free market will work to lower costs would be by having the individual being able to purchase the insurance directly and without the employer involved or the gov at any level deciding what should be in that plan. Anything else is just gov control masquerading as care or insurance.

During the Ocare debacle the comparison to auto insurance was made numerous times, trying to draw a parallel that doesn’t exist.
Auto insurers use past driving history, age and type of car to determine risk and therefore premiums. They could cover you, raise your rates or drop you altogether.
If one wants ‘health’ insurance, there should be some means testing i.e. overweight, smoker/drinker, couch potato and other known health hazards that would drive up the costs of care must be considered when determining or even covering someone.
Mean-spirited, black-hearted you say? Consider this; there is simply not enough resources to give everyone everything they want or believe they deserve. Some responsibility must be borne by the individual.

A good start would be allowing tax deductions for fitness center dues and other holistic avenues the HMOs used to provide.

Will this make joe sad?

The commander-in-tweet unfollowed the duo on Twitter, sometime after they turned nasty toward Trump on air.

“I had hope and an open mind. I have lost hope completely and my mind is closed,” said Brzezinski on their “Morning Joe” show last week.

“This presidency is fake and failed,” she added.

Scarborough, a former Republican congressman, has likewise been critical of the president in recent days.