Police finally cracking down on the murderous gang on Long Island. 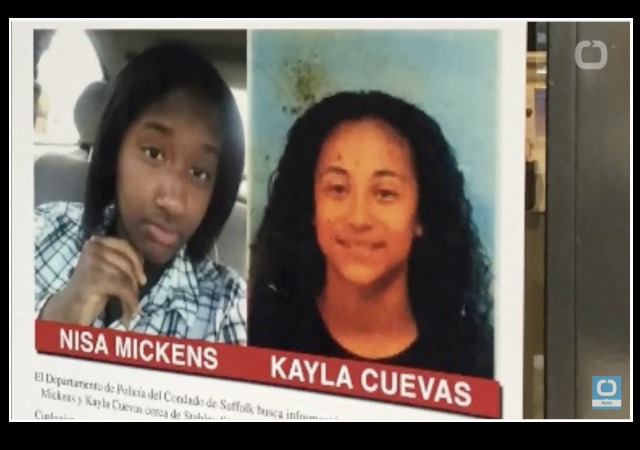 A court in New York has indicted 13 members, including 10 undocumented immigrants, of the notorious MS-13 gang for the killing of two teenage girls and five other killings over the past three years.

These charges include murder, attempted murder, racketeering, assault, arson, and obstruction of justice.

The members slaughtered Nisa Mickens, 15, and Kayla Cuevas, 16, “with baseball bats and machetes.”

Mickens’ brutally beaten body was found on a tree-lined street in Brentwood Sept. 13, a day before her 16th birthday. A day later, the beaten body of Cuevas, her lifelong friend, was discovered in the wooded backyard of a nearby home. Investigators had suspected the young girls — best friends with a passion for basketball — were victims of gang violence. Though several MS-13 gang members were previously arrested in connection with the probe, none had been charged with the killings until Thursday.

Capers said that four gang members had been looking for a rival gang member to attack or kill when they spotted the girls. They recognized Cuevas from a prior altercation with MS-13 members, called their “leader” and got approval to kill her and her friend, Capers said. The girls died by “swinging baseball bats and machetes,” Capers said, adding Cuevas ran for her life.

Authorities found Mickens and Cuevas during a six-week period where they “also discovered the remains of Oscar Acosta, 19, Miguel Garcia-Moran, 15, and 18-year-old Jose Pena-Hernandez,” all of which attended Brentwood High School.

The gang murdered Pena-Hernandez, a member of MS-13, because they “believed he was cooperating with law enforcement and lured him to a wooded area near Pilgrim Psychiatric Center and repeatedly stabbed him until he died.”

Unfortunately, Brentwood and other Long Island communities have faced terror and horror from gang violence “for more than a decade.” The police department and FBI only started “pouring resources into a crackdown after the killings of the high school girls sparked outrage.” From NBC New York:

Some people complained that police, school officials and others were not doing enough to stem the violence. Since then, police have arrested or re-arrested more than 120 MS-13 members on a variety of charges as part of a larger takedown, though none had been charged with the students’ killings. Many of the suspects were in the state and federal system already.

But now law enforcement promised the community an end to the violence:

“My message to the people of Brentwood and all of Suffolk County is that although we are keenly aware that nothing will ever undue the heartbreaking loss of Nisa and Kayla, we can take solace in the fact that their savage murderers will be held accountable,” [Suffolk County Police Commissioner Timothy] Sini said.

Sini said Suffolk police have cracked down on gangs. Police have collected intelligence on MS-13 members and created a list of gang members to put under surveillance. Officers have arrested members for various crimes, he said.

“We are going to eradicate MS-13 from these communities,” Sini said.

“…nothing will ever undue the heartbreaking loss…”

From Planned Parenthood to catastrophic anthropogenic immigration reform, American lives do not matter. Perhaps that will change as we discover our dignity, stand our ground, and reject Choice, [class] diversity, and anti-nativism.

When factoring in the cost of any wall, hopefully they will consider the cost of housing 10 undocumented thugs who now will spend years and perhaps decades in jail on our dime……

Good grief. I’d call these thugs animals, but that would be an insult to animals.

“… communities have faced terror and horror from gang violence “for more than a decade.” The police department and FBI only started “pouring resources into a crackdown….”

A decade of terror and horror, yet only recently started ‘pouring’ resources into a crackdown.

PS: Mary Chastain, They are illegal aliens, not ‘undocumented’ whatever. Stop burping up the leftist propaganda, please.

MS-13 is the direct result of the Left’s campaign to illegally bring in “refugees” from El Salvador, as part of their opposition to Reagan’s fight against communist expansion here in the Americas…

Deport them , in pieces

These the same jerks who were grinning for the cameras in court?
Thanks obama.

And that filth should never have been allowed in this country in the first place. This is what the left’s “open borders” gets us.

Membership in such a violent, murderous gang should automatically be considered tantamount to aiding and abetting murder, and thus members should all deserve the death penalty, to be meted out within two years of apprehension, maximum.

These asshats seem to be everywhere, at this point. A few years ago I had one show up on my doorstep at 3:20 AM looking for, he said, a couple of Mexican girls. He was drunk and/or high at the time, all five feet and maybe 120 pounds of him. I shooed him away, closed the door, checked my shotgun, then called the police to inform them of his presence in the neighborhood.

And that’s when things got odd. The police dispatcher seemed to have no idea what or who MS-13 was, even though it’s no secret they have a presence in a nearby town.