‘Most Dangerous Place in Germany’: Crime in Inner-City Berlin

‘Most Dangerous Place in Germany’: Crime in Inner-City Berlin 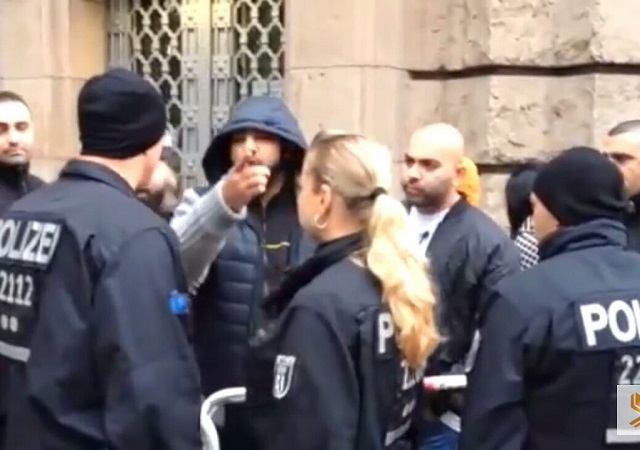 While the Merkel government and German media don’t like to talk about the No-Go Zones and the rising wave of migrant crime in the country, a popular German TV show “Akte 2017” has brought the issue to the forefront. German journalist and moderator Claus Strunz went to Berlin’s Kottbusser Tor area — dubbed as the ‘most dangerous place in Germany’ — to record the latest edition of his show.

As Berlin’s Left-wing state government prohibits police from carrying out video surveillance in the capital on the grounds of ‘preserving individual privacy’, Strunz and his crew installed 9 cameras in and around Kottbusser Tor, and ran them for 48 hours. Last year, Berlin police registered 1,600 crimes in Kottbusser Tor. However, according to the show’s moderator Strunz, his crew recorded ‘hundreds of crimes’ in just 48 hours and with just 9 cameras.

Strunz also pointed out that the deteriorating law and order situation in Kottbusser Tor-area has been the direct result of a recent migrant influx. The majority of young men he met there had entered the country in the wake of the migrant crisis that began 1 and a half year ago, Strunz said.

“If you come to this area as an [ordinary] citizen you are simply shocked by what you see. You see acts of violence at every corner. While we were there, police arrested 3 young men following a brutal fight. They had beaten someone up. Then you walk 50 meters to another corner that’s full of [drug] dealers.” (…)

“1.600 crimes were committed here [around Kottbusser Tor] last year, and these are the only the ones that were registered.” (…)

“All this prompted us to do what police can’t do in Berlin and other places in Germany, and we took over the surveillance of the Kottbusser Tor area. Our 9 cameras monitored the place for 48 hours. And on the video feed — we can’t say the exact number — but there are hundreds of crimes [on the tape] that would have otherwise gone undiscovered.” (…)

“[I] talked to the residents. A family that had lived in the area since 1994 and has two daughters, 18 and 13. They grew up there. And the parents say that since 1 and a half year they don’t let their daughters walk alone on the street…neither at night nor in the day. [Transcribed and translated by the author, Click here for the German-language trailer of the show]

But, rather than focusing on the rising migrant crime wave or the deteriorating law and order situation in Germany’s inner-cities, media instead decided to bash the messenger.

Following the airing of the show, one of the leading newspaper in Germany, DIE WELT, published an op-ed titled “How Claus Strunz is politicising the ‘Akte’ [Show]” and called him a ‘populist’ — dog-whistle in Germany for a Far-Right sympathiser.

Strunz was one of the few television journalists who highlighted the plight of the families of the victims of last year’s Berlin Christmas market attack, when an ISIS terrorist drove a lorry loaded with 20 tonnes of steel beams into a busy Christmas market, killing 12 people and injuring 48 others.

The German media in general chose not to personalise the stories of the Berlin terror victims. Chancellor Merkel and top members of her government also failed to meet the bereaved families. To add insult to the injury, the Merkel government has categorised the victims of Berlin terror attack as victims of “traffic accident”.

All this pain and suffering could simply have been avoided if the Merkel government had deported the illegal Tunisian migrant-turned-terrorist who was already on Germany’s terror watch-list.

For Merkel and Germany’s political class, the unsuspecting Christmas market goers or the women at Cologne station on the New Year’s Eve are merely roadkill on their Autobahn to their promised multicultural paradise. And the migrant crime wave is nothing but a road bump in their grand social engineering project.

But it is raaaaacist and xenaphobic not to welcome these newcomers!

It will be interesting to see how long the Germans put up with this crap.

My wife is German and she has turned into quite the clear thinking conservative.

Her father and brother are totally fed up with Merkel and her BS.

Then there is my German born stepdaughter. She, as well as her husband, thinks my wife and the rest of the family are a bunch of racists, that the refugee influx is not a threat and that Muslims especially are not a threat.

Seems to be a generational disagreement. I’m not optimistic how it will turn out. This bull will go on until it is too late to turn back.

The German state is a highly effective indoctrination machine. After WWII they started the propaganda to purge the Nazis from their society and instill a deep-seated sense of shame over what their society had allowed the Nazis to do. In recent decades the Progressive movement has taken over the mind-programming machine and they’ve done a fine job turning the young Germans into little prog-bots.

Police can’t conduct video surveillance in the capital? That is monumentally stupid and not just because of this recent rise in crime committed by these muslim migrants! As for the increasingly aggressive migrants, Germany, and a number of European countries really, needs to start getting tougher with them soon if they don’t want small scale civil wars erupting within their borders within the next few years.

I guess the Master Race isn’t so Master when faced with an enemy that doesn’t fear them.

Sorry, but the article as well as the TV show is very misleading about the Situation at Kottbusser Tor.

I live in Berlin and I was there many times at all times of day and night and never felt threatened. My 11 year old cousin is living less than 200 yards away for all his life and neither he nor his mother feel unsafe.

What is true, is that it is a main transportation hub and access to the area around which is full of restaurants, bars and clubs. And yes, there is relatively open drug trade their.

So you have a lot of party people and tourists there, many of them intoxicated and the connected problems. That is also the main complaint of long time residents: The party tourism and that the attractiveness of the neighborhood makes living there unaffordable for people with working class income and more and more old-timers have to move out.

Perhaps you can tell us all first hand how you and your family in Berlin feel culturally enriched by this mass migration and the willful disregard of the Schengen Agreement that has allowed this to happen?

This is happening all over Europe. Police, Fire, Ambulance are attacked in No-Go Zones. Police arrest ‘Refugees’ with loaded guns and the authorities release them the same day. Refugees are rarely prosecuted for rape and for some reason the govt. feels that we should not deport rapists & murderers. It is insane. The police have their hands tied. Dialog policing is the tactic that is employed. Police go in force to a call and talk until their is calm, before leaving the area and residents are left with the same criminals that the police were called to deal with in the first place. A few months ago one group of police was leading a Swedish team of reporters into an area of unrest and the police say to the reporters we are going here but “We Will NOT Be Making Any Arrests”(WHY THE HELL NOT!!!) The govt. refuses to even gather statistics as they will not report anything that paints their ludicrous utopian farce in the light of reality. We are doomed.

If you want a clue how all this might play out, I recommend The Caliphate by Tom Kratman. It is a novel, and thus fiction, but many of the “absurd, outlandish” ideas in it are already becoming chilling reality.

A clarion call for those who value Western civilization, and a very good read.