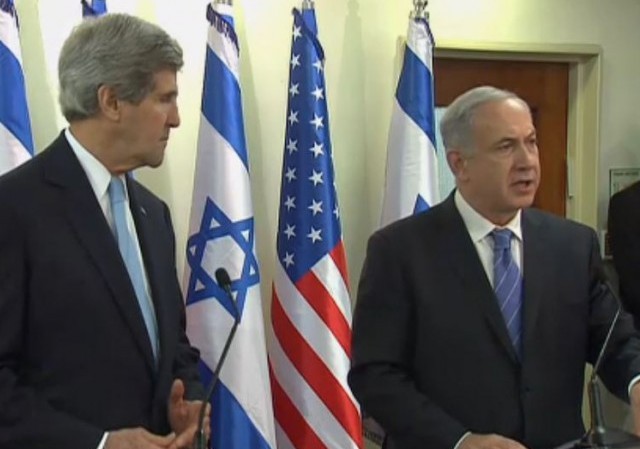 Barak Ravid, the diplomatic correspondent for the Israeli daily Haaretz, has a reputation of getting great scoops, especially of the sort that makes Israeli Prime Minister Benjamin Netanyahu look bad.

In a story with a sensational headline that has lit up anti-Netanyahu social media, Ravid reported, Exclusive Kerry Offered Netanyahu Regional Peace Plan in Secret 2016 Summit With al-Sissi, King Abdullah.

The sub-headline read, “Kerry’s outline included Arab recognition of Israel as a Jewish state. Netanyahu claimed he couldn’t get his coalition to back it.”

The details of the story is that a year ago, February 21, 2016, then-Secretary of State John Kerry convened a secret summit between Netanyahu, Egyptian President Abdel Fatah el-Sisi and Jordan’s King Abdullah in Aqaba, Jordan. At the summit Kerry presented a six-point proposal for a regional peace, that would include Arab recognition of Israel.

Unlike the headline, which uses the term “peace plan” suggesting this was fully developed initiative, nothing in the reporting suggests anything so advanced referring to it mostly as a proposal. The use of the term “peace plan” suggests that it was something already agreed to by all the parties except for Netanyahu, but the facts in the story make clear it was at most a proposal to restart negotiations with the Palestinian Authority.

Not a scoop but highly selective one-sided leak by Obama folks to create false impression after Trump mtg that peace was just around corner https://t.co/By1ooG3Jbn

But there are reason to question the conclusions of Ravid’s report.

For one thing the Ravid report omits context. In February of last year the so-called knife intifada was winding down, but there were still 107 attacks, largely driven by Palestinian incitement, in which 3 Israelis were killed. Was this really a good time to ask Israel to make concessions to the Palestinians, when their leadership was actively encouraging violence against Israel?

For another, here’s a paragraph from Ravid’s report:

It was Kerry who initiated the conference. In April 2014, the peace initiative he had led collapsed, negotiations between Israel and the Palestinians entered a deep freeze and U.S. President Barack Obama declared a time-out in U.S. attempts to restart the peace process. Over the next 18 months Kerry focused on attaining an agreement with Iran over its nuclear program; an agreement was reached in July 2015 and ratified by Congress in mid-September.

The peace initiative shepherded by Kerry had indeed “collapsed” in April 2014, but like Kerry, Ravid refuses to assign blame for the collapse.

In 2014, it was Palestinian Authority President Mahmoud Abbas who stiffed the American initiative. You can find it by looking at some, though not a lot, of the contemporaneous reporting. But even Tzipi Livni, Israel’s former peace negotiator and no friend of Netanyahu, charged that Abbas first refused to accept an American framework (that Netanyahu had reluctantly accepted) then signed onto numerous international accords (violating the principle that statehood should be achieved through negotiations with Israel) and then came to a unity agreement with the terrorists organization Hamas.

Notably absent from the summit was Palestinian Authority President Mahmoud Abbas, who was apprised of the summit and its result. But it is never clear if Abbas was offered Kerry’s terms or accepted them.

Would Abbas have accepted the terms mapped out by Kerry? We don’t know, but given that he blocked a previous American initiative it’s unfortunate that Ravid treats him as a bystander not a participant in the process. Jordan’s Abdullah was supposed to urge Abbas to accept talks based on the American proposals, but how or whether he responded was not reported by Ravid.

While Kerry had been insistent that it’s Israel’s failure to stop settlement growth that has doomed the peace process – he cited is as a reason for the American abstention of UN Security Council resolution 2334 – he never held Abbas responsible for scuttling his peace making. Kerry cited settlements in his much-panned speech defending the abstention. And while he mentioned Palestinian incitement and encouraging violence in that speech, it is very clear that the Obama administration’s criticism of Palestinian malfeasance (terror support, incitement) was never done with the outrage or consequences that matched their criticism of Israel. (A Washington Post editorial critical of Kerry even noted, “that the Jewish population outside Israel’s West Bank fence may have decreased as a percentage of the overall population even as Mr. Obama and Mr. Kerry have made it the focal point of U.S. policy.”)

Netanyahu today told the cabinet that it was he who had initiated the summit undermining a central premise of Ravid’s report. Ravid dutifully reported Netanyahu’s remarks and criticisms from a raft of opposition politicians but made no attempt to contradict Netanyahu or square Netanyahu’s claim with his own reporting.

The question is why Ravid reported this and reported it now. The more appropriate time to have reported it would have been after the abstention on 2334 to justify the Obama administration’s betrayal of Israel.

My best guess is that after the Trump-Netanyahu press conference last week, where both leaders discussed regional peace possibilities, Obama administration officials wanted to change the narrative in two ways. One would be to say,  “look we weren’t anti-Israel, we tried the same thing that Trump and Netanyahu are talking about” and the second is, “good luck with that, the problem is solely Netanyahu.”

I think that it is time to require polygraph exams for all employees holding security clearances at The State Department… throw in some random drug testing and see how many we can get to resign.

Ha ha ha ha ha, what sort of moron would believe anything that feckless coward and traitor Kerry had to say? Who cares what that idiot “offered” and what relevance does it have to reality?

The gigolo may speak, but no one listens.

Lemme fix that for ya,

“Islam blocking any and all peace plans; applies worldwide”

Leftist #FakeNews Haaretz is NOT a reputable source

I agree with Kaffa it’s past time for anyone who holds a security to have a re-investigation to include the polygraph.

Without a doubt that would help clean up some of the riff/raff left by the Obama administration!

And random drug tests. Too many folks with federal jobs actually believe that they are doing us a favor; it’s time to disabuse them of that notion.

Is there really anyone in Israel stupid enough to believe this?

If they would have been that close in 2016, Kerry and Obama would have been shouting it from the rooftops, to try and pressure Bibi into going along. They said nothing then because they had nothing.

”
Is there really anyone in Israel stupid enough to believe this? ”
Yes, those who read Haaretz, and of course “The Times of Israel” which has as its lede:
http://www.timesofisrael.com/herzog-right-wing-ministers-scuttled-regional-peace-deal/?utm_source=The+Times+of+Israel+Daily+Edition&utm_campaign=bbb93fd87f-EMAIL_CAMPAIGN_2017_02_20&utm_medium=email&utm_term=0_adb46cec92-bbb93fd87f-55110973
Another Kerry type, if you ask me, is Herzog.

I should have added, ” read the comments “.

Yes. Thank you. A number of the comments were very good. It’s starting to look that this “scoop” was more a ploy for Herzog to get back into the good graces of the Left. Read Ravid’s Twitter timeline (esp. in Hebrew.) It looks like Netanyahu and Herzog had negotiations but Herzog made demands that Netanyahu would have been ill-advised to accept. So he went in a different direction. Herzog of course used a trope of the left that Netanyahu is hostage to Israel’s right-wing. The truth is that if Herzog were PM, he probably wouldn’t agree to make the compromises he now demands of Netanyahu.