“We have it on absolutely incontestable evidence that the United States organized, advanced and brought this resolution” 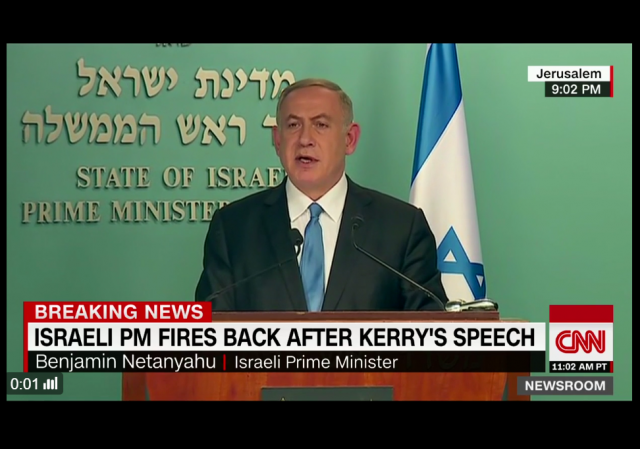 Perhaps the biggest bombshell was the repeated accusation that the U.S. was behind the resolution.

Bibi: I must express my deep disappointment today with @JohnKerry speech-

#BREAKING: Netanyahu in response to Kerry speech: For one hour he attacked the only country where Christians can celebrate Christmas pic.twitter.com/ts3Njfxtcd

Netanyahu responds to Kerry: Israelis don't to be lectured about the importance of peace by foreign leaders. No one wants peace more than we

>> Bibi to Kerry: You didn't touch on core of the conflict: the Palestinian opposition to a Jewish state in any boundaries.

Netanyahu: "Israelis do not need to be lectured about the importance of peace" https://t.co/JnTnuXgCIt https://t.co/KL4RTSziHr

.@netanyahu: Israel hopes that the outgoing Obama admin will prevent any more damage being done to Israel at the UN in its waning days. pic.twitter.com/AwoXqIcMpx

This current U.S. Administration is really trying to go out on a shameful note, aren’t they?

and doing a bang-up job of it…

Nope. Not shameful at all.

They’re trying to go out on a proud, pro-Muslim, pro-jihadi, anti-Israel, anti-American note.

“Shameful” implies the Obama Administration is making a mistake. There is no mistake; this is the exact path they wanted to walk, but couldn’t because they had to maintain the deception.

Leftists have no shame.

electing a muslim has consequences unfortunately.

This inept, corrupt, Muslim-loving America hating abortion of an Administration makes Jimmah Cahtah look like a saint. If Al-Chicagi doesn’t have the Kept-Man John Forbes (Kohn) Kerry on his pardon list, the new AG should go after Kerry for treason.

I thought the Wicked Witch of Chappaqua was a POS SECSTATE; but seeing as how both she and Lurch work for the same boss, it’s safe to conclude their worthless effort met with great satisfaction at the highest level of Government.

Um, treason?! You can’t possibly be serious about that. Treason has an exact and very narrow definition, and nothing Kerry has done in the last 40 years can possibly justify it.

YES, treason….but not ONLY by john Kerry, but Obama too. Both, in their ‘secret deal’ with Iran sold the US and the world out by enabling Iran to soon become nuclear armed. Read what Ben Rhodes accidently stated about how this admin ‘spin’ [LIED] to us again. Funding the largest terrorist funding nation in the world.. they both have seen to it that our children’s/g-children’s futures are in great danger. Kerry admitted the Iranians might well use the funds Obama chose to return to them to fund terrorism.
======
John Kerry: Some money Iran received will fund terrorism … – CNN.com

Jan 21, 2016 – John Kerry: Some sanctions relief money for Iran will go to terrorism. … Davos, Switzerland (CNN)Secretary of State John Kerry acknowledged to CNBC Thursday that some of the money Iran received in sanctions relief would go to groups considered terrorists.
——
And all the while Obama and john Kerry KNEW those funds would fund more terrorism….. didn’t matter to them that the Iranians were chanting ‘DEATH TO AMERICA’ as Kerry signed the secret deal with Obama’s full approval.
–
WAKE up time.

None of that adds up to treason, and either you know it or you’re so ignorant on the subject that you should not talk about it.

“Treason against the United States, shall consist only in levying war against them, or in adhering to their enemies, giving them aid and comfort.”

Iran is a self-declared enemy.

Giving them billions of dollars and greasing the skids of their nuclear weapons program is giving them aid and comfort.

“Netanyahu in response to Kerry speech: For one hour he attacked the only country where Christians can celebrate Christmas ” – Christmas, Christianity and Judaism are now targets in Obama’s America.

Over at Gateway Pundit, they have this recent article: “On Christmas Weekend Obama Signed Over Christendom’s Holiest Sites to the Muslims”
http://www.thegatewaypundit.com/page/3/

Obama is no friend of Jews nor Christians.

They always have been anti-Christian, anti-Israel… and Hillary was even more so. Obama quote: [and something you NEVER saw him say about Christians or Jews nor the God they believe in = “The future must not belong to those who slander prophet- mohammad”

In lieu of this, both Houses of Congress could pass a strongly worded memorial.

Netanyahu spoke eloquently…which is miraculous, given the size of the knife in his back. 23 more days until the Trump Train arrives.

Is there a sense of outrage in the US Jewish community at the admins actions? Will it affect their support of Dem candidates? Unfortunately, past experience leads me to bet NO.

Sadly, no. Most American Jews (around 70-80%, or all the Obama-voting ones) are Democrats first, Americans second, and Jews a distant third. They drink the anti-Israel Kool-Aid.

They’re not outraged; they’re stoked that the U.S. finally stepped aside and let the U.N. stand up to the evil, warmongering, apartheid-loving Israelis.

Most 0bama-voting Jews are upset about this, but they’ll get over it. It’s not nearly enough to make them consider Republicans <shudder>.

Maybe Trump will win ’em over!

After 8 years of enjoying the screwing Obama gave them, I can understand why they fear Trump may not meet their standards. They are probably right.

That’s interesting. I know I posted this to another thread ( https://legalinsurrection.com/2016/12/trump-responsible-for-low-libido-epidemic/ ), but it wound up here.