52-47 with Manchin being the only Democrat to vote yes. 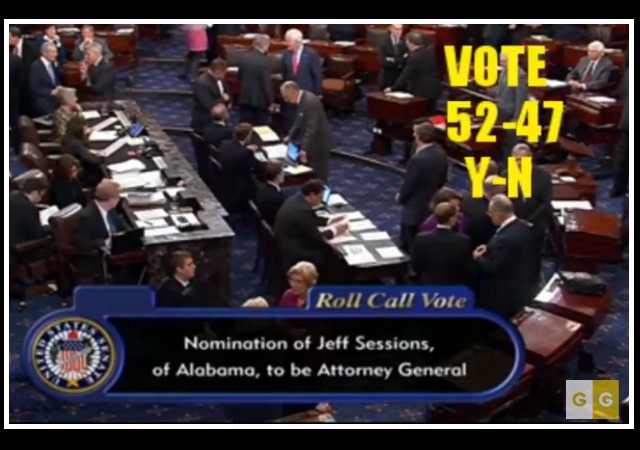 The Senate has confirmed Sen. Jeff Sessions (R-AL) as the next attorney general. The Democrats attempted to persuade their colleagues with a 24 hour debate, but they lost one of their own.

The Democrats have tried to cast Sessions as a racist and an enemy of the gay community. They also don’t believe he would stand up to President Donald Trump. But the Republicans, including Sen. Tim Scott (SC), have taken Sessions’s side and rebuked all of those claims.

Sessions will take over the Department of Justice for President Donald Trump, who had the senator’s strong support on the campaign trail.

The closeness between the two worried the Democrats, who do not believe that Sessions can say no to Trump. Their worries spiked after Trump dismissed acting Attorney General Sally Yates when she refused to enforce his temporary immigration ban.

Allegations of racial bias sank Mr. Sessions’ 1985 nomination for a federal judgeship, and the issue flared up again in this confirmation fight. Mr. Sessions and his allies have pushed back, highlighting civil-rights cases Mr. Sessions supported and showcasing support from black colleagues.

At his recent confirmation hearing, Mr. Sessions described claims that he is racist as “damnably false.” Sen. Lindsey Graham (R., S.C.) spoke on the Senate floor on Tuesday in Mr. Sessions’ defense and showed an award the National Association for the Advancement of Colored People, which opposed Mr. Sessions’ 1985 nomination to the federal bench, had given Mr. Sessions in 2009.

But during the debate, Sen. Tim Scott gave a passionate speech for Sessions, refuting all the claims of racism against Sessions and showed how the critics have skewered the past to smear Sessions.

.@SenatorTimScott reads tweets criticizing his endorsement of Sen. Jeff Sessions: "I left out all the ones that use the n-word." pic.twitter.com/AhTnGaUyiz

Sessions’s colleagues gave him a round of applause after voting ended.

Now the Democrats will begin another 24 hour debate before the Senate votes on Rep. Tom Price as Secretary of Health and Human Services on Thursday.

It looks like it will go down party lines.

Sessions sitting on flr as Senate approaches his confirmation vote to be Attorney General.

.@SenatorTimScott reads tweets criticizing his endorsement of Sen. Jeff Sessions: "I left out all the ones that use the n-word." pic.twitter.com/AhTnGaUyiz

Been listening to this most of the afternoon. Senator Bennet from CO sounded like a total idiot. Badman Kaine was a joke and Rubio was awful and used the soapbox for Russia. If you really want a great take on Session, listen to Senator Tim Scott. He below away any argument against session.

I just can’t wait to get this vote over. Bernie is up now. He is attaching Trump, ha. I love it. His head is going to explode. He sounds like he is about ready to cry.

This is gonna be straight (or nearly straight) party lines. In the end Sessions will be AG.

I think he is going to take it by 61 votes. What these back stabbing Dems have done to this decent man is unforgivable. They have worked with him for twenty years and know what a humble honest man he is yet they put party before their own honor. Is there no shame in the US Senate?

I apologize because I was talking about Jeff Sessions but was thinking about Judge Gorsuch on the votes. I knew that since Sessions only needed 51 votes he would be confirmed with maybe Manchin voting yea also.

I will wager that Gorsuch ends up at the same final 52-47 vote; I think every nomination for the rest of this year will be within a vote of that either way. Of course I think McConnell will find a way to neuter a filibuster, as in the Heritage paper quoted recently.

I’m sure there are dems who know what they are doing is stupid and wrong, but they are now terrified of their liberal donor base, and realize they will be destroyed by their angry fanatical base if they cross them.

So they, en masse, have chosen suicide at the polls in 2018 in exchange for cred with their base today.

I was hoping that the Sessions confirmation would be last so he could vote on Gorsuch.

I’m confident that his replacement will vote for Gorsuch.

How does it work in Alabama?

The governor picks an interim replacement. And way back when Trump announced his pick the governor asked the state GOP for candidates. Since it took so long to confirm, I expect the replacement has already been selected.

How come the chamber is empty?

It usually is. Congressmen don’t have time to sit around listening to debates. They’re busy people. They show up when it’s their turn to speak, and when there’s a vote. Most of the time there’s no quorum, but nobody calls the president’s attention to it so it doesn’t matter; any time someone wants a delay, though, they call a quorum count.

Time to expunge some of the evil created by the Killer of Chappaquiddick. Who is currently incarnated in the slime called Schumer.

– And his GOPe bitch, Rubio.

Sessions is officially confirmed. Final tally 52 — 47. Manchin was the 52 vote.

Liberal heads are now exploding all over the world.

Gonna be a lot of hard drive wiping goin’ on.

What? With a cloth?

What a gentleman and a scholar Senator/AG Sessions is. We are so lucky to have a good man, a tolerant man, and a patriot, in this important position.

So the democrats are now officially “The Party of NO”.

Good. While party discipline does eliminate some useful things (things like, say, rational thought) from the decision-making process—which should be bad—it’s the only way to fight effectively when the other team’s discipline is almost unbreakable.

I didn’t think the R’s could do it. Things are looking up.

Sen. Machin don’t need a weatherman to know which way the wind blows. Or something like that.

“52-47 with Manchin being the only Democrat to vote yes.”

For the last 8 years, the Dems have had a word to describe this type of vote…what was it, again?

Make sure you use that term when discussing the vote with any Dems/lefties/progs. Let’s see how well their blood pressure meds are working…

An unexpected (for me) pleasure resulting from this vote was a chance to see Sen. Tim Scott R — South Carolina, in action.

Sen. Tim Scott Explains His SUPPORT for Jeff Sessions as a Black Man, Reads RACIST Hate Tweets
https://www.youtube.com/watch?v=WMzp8D0hKYE#action=share
(Even admits the ones he couldn’t read had the N word in them)(This is around the 13:30 mark).

After you watch that, don’t stop there. Continue on and watch starting at 16:57 and how he gracefully says what we’ve all been saying. The tolerant left is only tolerant towards people that agree with them. They are extremely hateful, bigoted, and racist towards everyone else.

I’ve been asking for candidates, and the Republican Party has them. This is an indicator that there is some real depth of field in the Party.