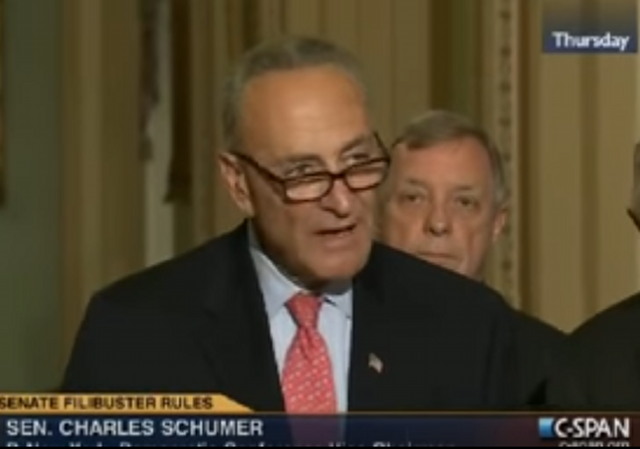 Democrats are doing everything they can to obstruct the confirmation of Trump’s team. It’s not doing much good considering the fact that Betsy DeVos and Jeff Sessions have been confirmed in the last few days.

Their strategy is simple. If they can’t stop Trump’s nominees, they’ll just try to damage them as much as possible.

Senate minority leader Chuck Schumer had a different attitude about this a few years ago, however.

Thanks to Google, there’s no such thing as the memory hole. Just about everything is neatly archived on the Internet forever, including Senate Minority Leader Chuck Schumer’s hypocritical political record on presidential nominees.

Schumer might insist Democrats are just acting as a constitutional check on the administration by slowing executive nominees. But a quick search shows he once decried what he’s now embracing.

Four years ago, Obama had just won a second term, Democrats controlled the Senate, and Schumer was getting annoyed with Republicans. “Just about everyone in America—Democrat, Republican, liberal, conservative—believe that once you elect a president,” Schumer said, “he deserves his choices to run the executive branch.”

Because the minority wouldn’t sign off, Schumer accused them of holding the government hostage. Republicans were, he argued, “trying to “paralyze the executive branch the way they’ve paralyzed the legislative branches because they really don’t want the government to function.”

Here’s the video of Schumer making those remarks:

Twitchy has collected some reactions to this:

It is truly sickening to watch the spectacle the Democrats are putting on. https://t.co/uTPO3TG6ZE

Democrats have selective memories, and when confronted with truth they lie, lie, lie. https://t.co/LRqa7yJhZN

The hypocrisy that runs through these folks https://t.co/m7QlRiM66a

The whole place is a monument to hypocrisy in brick, sandstone and marble. https://t.co/lR0uVOfAKu

Democrats: Everything is different when we do it.

Thanks to Google, progressives now have complete control of the memory hole

I guess Schumer has “devolved” in his thinking since then…

Ah, liberals. Is it any wonder we love them so?

If it weren’t for double standards, they’d have no standards at all.

We really ought to bring back his nickname, Chucky “Flashbang” Schumer. When the ATF used flashbang grenades against women and children in the Branch Davidian compound, he remarked at a Congressional hearing how flashbang grenades were harmless and they couldn’t hurt anybody. Apparently that nickname has gone down the memory hole as well.