Finally the story is being told. 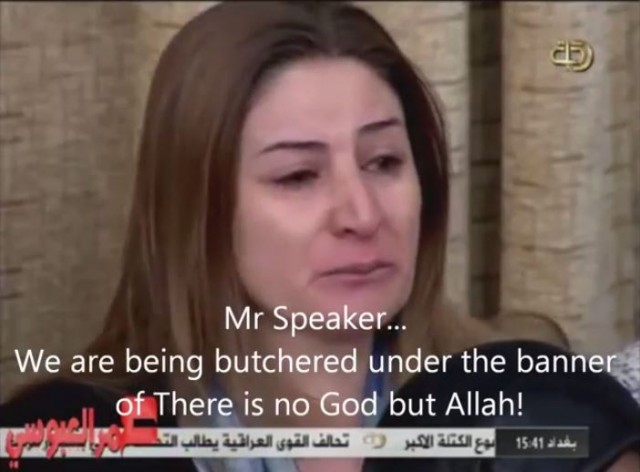 While over 700 journalists were covering the Gaza conflict, few paid attention to the mass slaughter in Iraq of the Yazidi, who are on the verge of a true genocide at the hands of ISIS.

Finally the impending massacre is getting coverage, but it may be too late.

Stranded on a barren mountaintop, thousands of minority Iraqis are faced with a bleak choice: descend and risk slaughter at the hands of the encircled Sunni extremists or sit tight and risk dying of thirst.

Humanitarian agencies said Tuesday that between 10,000 and 40,000 civilians remain trapped on Mount Sinjar since being driven out of surrounding villages and the town of Sinjar two days earlier. But the mountain that had looked like a refuge is becoming a graveyard for their children.

Unable to dig deep into the rocky mountainside, displaced families said they have buried young and elderly victims of the harsh conditions in shallow graves, their bodies covered with stones. Iraqi government planes attempted to airdrop bottled water to the mountain on Monday night but reached few of those marooned….

Most of those who fled Sinjar are from the minority Yazidi sect, which melds parts of ancient Zoroastrianism with Christianity and Islam. They are considered by the al-Qaeda-inspired Islamic State to be devil worshippers and apostates.

Politicians appealed Wednesday for emergency aid for thousands of minority Iraqis who have been stranded with little food on a mountaintop in the country’s northwest, surrounded by al-Qaeda-inspired rebels.

For nearly two months, Kurdish forces had managed to protect the area from the Sunni extremists who have rampaged through much of northern Iraq, slaughtering opponents, destroying ancient shrines and demanding that people of other religions convert or die. But last weekend the famously tough Kurdish fighters suffered their first setbacks in the Sinjar region, prompting hundreds of thousands of civilians to flee.

An estimated 10,000 to 40,000 of them sought refuge on the craggy peaks of Mount Sinjar — largely members of the minority Yazidi sect. They fear death if they descend into areas controlled by the extremist rebels, who consider them apostates. Kurdish forces have so far failed to break through the militants’ lines to reach them, despite launching a counteroffensive early this week.

Meanwhile, the Kurds have formed a stable, self-governing society and extended their protection to people of other faiths. A little help to them might actually do some good.

The leader of the Boko Haram has recently declared allegiance to the ‘caliph’ of ISIS.

The King Abdullah of Saudi Arabia is getting nervous…bet Abdullah of Jordan is even more nervous.

Valerie, the Yazidi are not Muslim.

They are Kurdish and Zoroastrians according to one source.

I guess they’ll be exterminated then.

This is way over-simplified. Nor, does it capture the true essence of Islam. It kinda makes it sound like this is a modern problem, specific to a few “organizations”.

I advise everyone to view this lecture when they have the time (it’s 40 min.)

Ideological purity begins at home. Rid yourself of Muslims who won’t do exactly as Muhammad did, then go after everyone else. What’s happening in Iraq is exactly what Muslims did to the Arabian Peninsula upon Muhammad’s deathbed command: remove or enslave everybody who won’t convert, making the entire area for Muslims only. ISIS’ success will embolden the rest of Islam to emulate it and eliminate their non-Muslim populations as well.

I blame Britain & the US for encouraging ISIS to take over Northern Iraq as a base to attack Assad. Now they are outta control.& they ain’t stopping there.

The people of Iraq& kurdistan are tired by 10 years of war . Thank you GWBUSH . Huh so much for the coalition of the WhateverWasit & WMD . It is like a nightmare from another era back to haunt us mall.

I think we need to have a look at that again .without prejudice .

Was that when he was our ally & attacking Iranian allied Kurds during the Iran/Iraq war or when he was not our ally & attacking Kurds because they were insurgents ? These are the same people who were waging terror attacks in Turkey & on European terrorist lists? Kurdish Independence within Turkey was the big thing of the 70-80s – escaping to Iraq/Iran tribal zones to hide .

Do we have the mental fortitude to go back & re evaluate – no ,nor do we have the time. In any case , the Kurds have lost their mojo after we have been protecting them since Clinton with no fly zones .

From feared terrorists to pushovers .

BTW -in the historical Massacre Index Kurds have only recently admitted to the Armenian Genocide ..whilst the Turks picked off the head the Kurds killed hundreds of thousands of the stragglers dispersed behind .women children elderly animals – they wiped out everything .

Families wait there and die, as Obama and Hillary campaign.

The Kurds deserve at least some support, but they will wait just as Ambassador Stevens waited, while Obama/Hillary planned how to spin the news, while denying military support.

Obama apparently believes America is the problem everywhere, but may have trouble explaining the death and destruction that fills every area where he beats a hasty retreat.

What’s a community organizer and PGA wannabe supposed to do when the right thing is personally politically risky? 30,000 lives are more important than polls? C’mon! HELLO – midterms in three short months!

400 Yazidi women have been kidnapped by ISIS to serve their warriors as sex slaves.
http://weaselzippers.us/195593-report-islamic-state-enslaves-400-yazidi-women/

In Libya, a nurse was gang-raped by these Al Queda-Isis beasts. http://theconservativetreehouse.com/2014/08/07/hillarys-rebels-in-action-filipino-christian-nurse-abducted-and-brutally-gang-raped-in-tripoli-libya/

The same thing is happening in Europe, Asia and Africa – wherever the cancer of Islam metastasizes.

Yet, the UN, Obama, Inc. and most of our legislators are deaf to the cries of the true victims of a real War on Women and the atrocities of the real racist hate group. The can’t smell the stench because they are part of the culture of death. Abortion, homo/bi/pansexuality, Islam, communism/fascism are all one evil family. Destruction, disorder, disease and death are their common denominators.

Note to Palestinian apologists: this is what “ethnic cleansing” looks like.

The Kurds (Peshmerga) have reached the Yazidi and are providing food, water, and evacuation.

Henry, that’s according to UN officials, so…….

kill anyone who puts a comma at the end of the sentence that you (isis)have placed a period. pure Nazi savagery!

I’m told we have to fly illegal immigrants from El Salvador to Alaska and Hawaii because it’s the moral, Christian thing to do-

Arrange an air drop of water/rations on the side of a barren mountain where 30,000 (real) children are dying of thirst?

Obama “invited” the surge of teenage Hondurans, (which was foreseen and planned for by them) after Obama/Holder promised not to execute our laws on illegal alien dreamers. So he knew these children would endure abuse by coyotes, but it served his political purposes.

When drug cartel connected Zelaya attempted to extend his term limits (2009), Obama sanctioned Honduras in efforts to reinstate Zelaya, in defiance of their courts and legislature. That also hurt the Honduran children. Obama then sided with Chavez and Castro, against the Honduran democracy.

In the US, the children are abused, by poor education from entrenched unionized incompetents, high unemployment, and the incredible debt being put on their “credit cards”.

How does TFG get away with claiming he is just trying to do the right thing and help the children?

Glad I’m not the only one that remembers vividly what Obama tried to pull with Honduras–though it sure seemed like it.

Yep. Pres. ScamWOW has never met a dictator he didn’t like. Well, except those who were nominal allies of the U.S.

Most recent case-on-point, his Monsters’ Ball with African tyrants.

It would seem the world is largely run by criminal gangs, with various levels of power, including government connections. America seems to have taken a giant leap further down that road dark alley, with the Obama/Holder gang.

I just watched this last night, about the corruption of Africa and the “diplomatic cover”. No surprise I guess, Obama’s mob wants to move in on the Africa action now. Who knows what connections they’ve made via their Muslim Brotherhood pals.

“The Ambassador (2011)
I almost can’t believe this film exists. Documentarian Mads Brügger forges an identity as a diplomat to the Central African Republic in order to insert himself into the heart of the diamond trade. What follows is terrifyingly unbelievable look into industry, corruption and violence.”
http://cavemancircus.com/2014/08/05/11-documentaries-people-usually-dont-like-documentaries/

It’s on Netflix streaming, probably on Amazon Prime too.

It seems there are many “conservatives” over there that couldn’t care less because:

-The Yasidi are “Devil worshippers” so to hell with them.

-The Peshmerga deserved to get their asses kicked for stupdily running out out ammunition.

Yezidis worship the ‘demiurge’ just like the Zoroastrians. Who are never called ‘devil worshippers,” so the Yezidis are routinely slandered by bigoted Muslims.

The only way to get guns to peshmerga is through Turkey, which since PKK days, doesn’t like to arm any Kurds at all.

I should have said, Yezidis worship “both Allah and the demiurge” which is the traditional fire/sun worship of pre-Islamic Persians.

We have Obama and his limp-wristed British counterpart.

This is all on you Mr. Obama.

Our clown-in-chief may go so far as to call ISIS ‘very irresponsible!’

Is this awkward, outrageous, or a “told-you-so” moment :

Obama has been looking at a range of options, from dropping humanitarian supplies on Mount Sinjar to military strikes on fighters from the Islamic State who are at the base of the mountain, a senior administration official told the newspaper.

Is his highness going to come out of the closet about sending our soldiers back?
Will he admit that he was wrong ?!!
I want to see that !!!!!

Let me get this straight. There is a majority of Shiites in Iraq. Why the hell are they letting these guys take over their country? Didn’t they learn their lesson from Saddam Hussein? Grow some balls and take your country back. In the process slaughter every last one of those ISIS pricks. Between the Kurds and Shiites, you’d think they could over power ISIS.

The slaughter of the Yazidi, the invasion of Ukraine, ISIS running the arabian peninsula, Hamas kidnapping teenagers, slaughtering them, bombing Jerusalem and using Palestinian children as human shields. This is what comes of a weak President like Obama. After Benghazi, he did absolutely nothing in terms of retaliation, and the world saw how pathetic he truly is. Putin, Assad and ISIS saw how weak and feckless Obama is, so they took advantage. As bad as GW was, other world leaders were afraid of what he might do to them.

( I hear on ABC News radio, the U.S. is air-dropping food and water on the side of the mountain)

Awfully white of them-

Kurdish TV reports the US has bombed ISIS in support of the stranded Yazidi, but the Pentagon flatly denies this. I believe the denial because the WH would have leaked it to the press for political gain.

Ah, the Iraqis did the bombing. You were close, Henry. They used Russian aircraft they just received earlier this year.

Yazidi, eh? Someone tell Michelle that what they most need airlifted to them is lots of healthful salads.

These corrupt ‘news’ idiots don’t care much about the slaughter of anyone or any thing unless it suits their juvenile, narcissistic agenda. Then, just about anything is a ‘slaughter.’