Jihadists say airstrikes have killed some of the girls and they married off at least 40 of them. 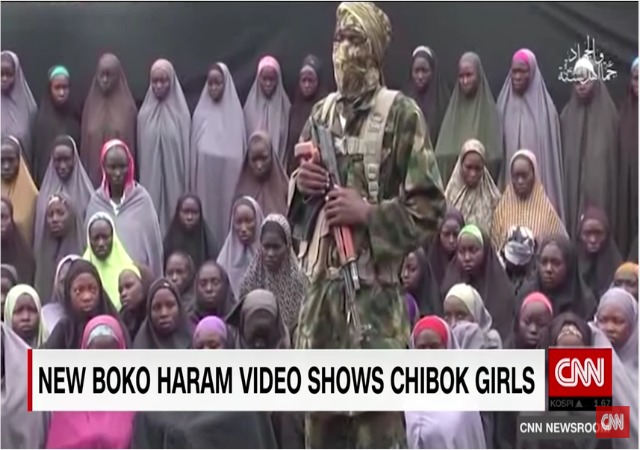 Nigerian radical Islamic group Boko Haram has released a video of the Chibok girls they kidnapped in 2014. The video shows one girl begging the government to a “prisoner swap to secure release.”

One of the jihadists tells the audience that airstrikes killed “some of the 276 girls taken in April 2014” while they married off 40 more “by the decision of Allah.”

A girl named Maida Yakubu spoke to the camera:

In the new video, a girl who identifies herself as Maida Yakubu says: “Oh you, my people and our parents, you just have to please come to our rescue.

“We are suffering here, the aircraft has come to bombard us and killed many of us. Some are wounded. Every day we are in pain and suffering, so are our babies. Some of our husbands that we married also are injured, some dead. No one cares for us.

“Please go and beg the government of Nigeria to release the members of our abductors so that they, too, can free us to let us come home. We are really suffering, there is no food to eat, no good water to drink here.”

But the masked jihadist said they will never see the girls alive again if the government does not meet their demands:

“They should know that their children are still in our hands,” he says. “Presently, some of the girls are crippled, some are terribly sick and some of them, as I had said, died during bombardment by the Nigerian military.”

The militant did not identify himself as he spoke in front of about 50 hijab-wearing girls, some of whom were cradling infants. It has yet to be confirmed if all the girls were from Chibok.

“We don’t want to do anything with these girls, our demand remains the same,” he said. “We want the government to release our fighters who have been in detention for ages; otherwise we will never release these girls.”

Family members watched the video and confirmed it shows their daughters. Yakubu Khan “told CNN he is overjoyed to see” his daughter Dorcas alive on the video:

“I’m very, very happy I saw my daughter on the video and I’m very happy she’s alive. Some people has said the kidnapping is not true. Some people have said they are no more alive. Now I see her and I know she’s ok.”
Kabu added that he recognized many other girls from Chibok in the video clip.

The government claims they remain “in touch” with Boko Haram to release the girls. But some believe it goes deeper than that:

“This is a government which is not only in denial mentally, but in denial about certain obvious steps to take,” Nigerian author Wole Soyinka, a Nobel laureate who is often referred to as the conscience of his nation, told CNN’s Chief International Correspondent Christiane Amanpour in May 2014.

“It’s one of those rather child-like situations that if you shut your eyes, if you don’t exhibit the tactile evidence of the missing humanity here, that somehow the problem will go away,” he said.

Other experts believe Boko Haram released it because of the power struggle within the group. The group has always pledged allegiance to the Islamic State, but they apparently caused friction when they announced their own leader for the group. Abubakar Shekau, the leader of Boko Haram, probably released the video to show he remains in charge:

Shehu Sani, a Nigerian senator, told CNN: “This is more of a show of strength to the Nigerian government and to ISIS. Shekau wants to show the country and the world that he is fully in charge and that he is the one that should be negotiated with.”

Sani, a former negotiator and mediator with Boko Haram, added that it was difficult for the Nigerian government to negotiate with Boko Haram for the release of the girls as “there is a lack of trust on both sides.”

Boko Haram terrorists kidnapped the 276 girls from their school on April 14, 2014. 57 girls have escaped the terrorists since the abduction. The kidnapping launched the #BringBackOurGirls campaign across the world and social media, including First Lady Michelle Obama.

In January, the BBC’s Jimeh Saleh traveled to the Sambria Forest with the Nigerian army. However, no one has actually moved into the forest because the terrain with no roads could pose many problems for the army. The military also avoids the main roads because the terrorists have lined it with explosives and weapons.

Obama, Hillary, and Merkel’s kids are always up to mischief, maybe hugs and love will turn them around.

Like the Imperial Japanese, you have to kill them wherever you find them.

This continuing outrage lies entirely at the feet of the Obama, Clinton, Kerry mindset. They built it, they hold title, they own it.
That’s another reason Hillary Clinton must not be allowed to move back into the White House.

I believe SOFREP reported a while back that Nigeria had turned down CIA offers for help and opting instead to hire Merc’s out of South Africa to handle “some” issues with Boko Harem.

Important for Westerners to remember- Nigeria doesn’t really care about these girls either. They may as well have kidnapped some goats.

That may very well be true.