Sessions promised to keep politics out of his Department of Justice. 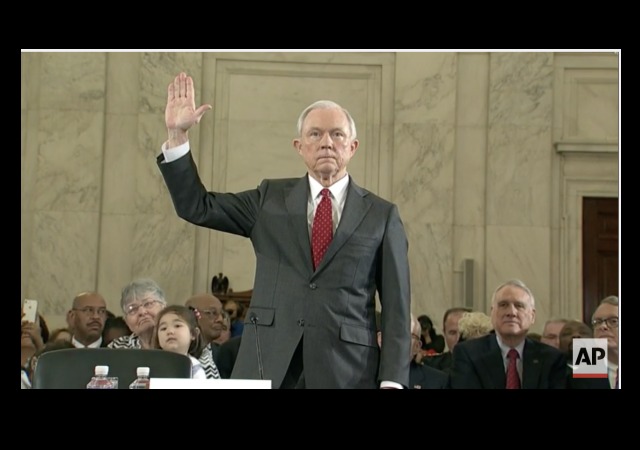 Senator Jeff Sessions (R-AL) faced an all day confirmation hearing for attorney general in front of the Senate Judiciary Committee.

The senators had a blast asking Sessions the same questions over and over. Some asked valid questions while others asked obscure questions that made you scratch your head.

Everything started with a bang as protesters from CodePink and pro-pot gathered in the room. I lost count how many people caused disturbances during the hearing, forcing police to kick them out.

At Sessions' hearing: @codepink , and to the right in red on his phone, marijuana legalization activist @aeidinger pic.twitter.com/OM5QibY16l

Sessions campaigned hard for Trump, even appearing on stage when people screamed “LOCK HER UP.” He said he never uttered those words, but due to his presence on the trail, “he would recuse himself from any lingering investigations involving Hillary Clinton or her family’s foundation.”

He told the committee that he would also carefully choose a time to use special prosecutors. He advocated for Attorney General to assign one for the Clinton investigation.

Questions on Muslims slipped out continuously during the nine hour hearing. Over and over he told the senators that he would uphold the Muslims’s Constitutional rights and objected to the idea of a Muslim registry.

Concerning immigration, he said the system has flaws. He opposes an outright ban to accept Muslims, but said the government should strongly vet those who come from countries with a high terror risk:

He said he did not support an outright ban on Muslim immigration, as Mr. Trump frequently suggested during the presidential campaign. “I have no belief and do not support the idea that Muslims as a religious group should be denied admission to the United States,” Mr. Sessions said. But he noted that Mr. Trump has since clarified that restrictions should be placed on immigration from countries that support terrorism, which Mr. Sessions said was lawful.

The Democrats also brought up abortion since Session has strong pro-life views. Despite those views, he promised to uphold Roe vs. Wade. He said he would provide protection for those who want to access an abortion clinic from protesters and harassment.

Sen. Ted Cruz (R-TX) listed the numerous incidents that President Barack Obama’s DOJ has politicized the department over the eight years, including the gun running scheme Fast and Furious that led to the death of Border Patrol Agent Brian Terry. Cruz asked if Sessions could stop this from happening during Trump’s administration.

Again, Sessions promises to do what the attorney general should do: Uphold the laws and keep politics out of it. He even said he would not vote for his confirmation and recuse himself from voting for other Cabinet nominations.

“I’m hoping that you’ll be different than your predecessors in response to oversight questions,” a clearly embittered Grassley said, holding in the air “a whole bunch of letters” that Justice officials never addressed. “I hope you would go to great lengths to make sure that these are answered.”

Grassley also expressed bitterness that his questions were often ignored when Republicans were in the minority and expected Sessions to treat the new ranking Democrat better.

“I want her questions answered just like you’d answer mine,” the chairman said.

Sen. Sheldon Whitehouse (D-RI) provided some of the oddest questions like seriously asking Sessions if he would uphold laws concerning sexual abuse. Of course Sessions said yes. Then Whitehouse went down the climate change road, asking how Sessions would deal with it. I had no idea climate change had anything to do with the DOJ. Will Sessions press charges against Mother Nature for changing her climate? I DO NOT GET IT, BUT OKAY.

Sen. Ben Sasse (R-NE) brought up a case from his home state about a girl killed by a man who was street racing. The man managed to post an incredible amount of bond money, forcing the officials to ask the federal government to step in to make sure the man did not flee. Unfortunately, they did not place these case high on the priority list and the man escaped.

Sasse told Sessions he plans on sending a letter to Sessions after confirmation, asking for a priority list for situations. Sessions said he would be more than happy to provide it.

I was under the impression that the AG enforced the laws rather than make them, but some of the Senators seem to imply that Sessions was supposed to expand on laws beyond the written meaning.

They still think this is the Era of Obama maybe?

Of course. That is the Progressive Way. It has been that way for nearly a century.

How did the Code Pink protestors, dressed in KKK robes and sporting huge foam hands, get past security into the hearing? Were they enabled by LibDem staffers? Perhaps they idenitfied themselves as staff of Sen Cory Booker?

This was supposed to be one of the Dem’s top targets in the confirmation process.

This was the best they could do?

Sessions has an impeccable civil rights record, so opponents were doomed from the start.
Time to start enforcing our laws!