“If anyone listened and paid attention to what the American people said when they voted, they want this place to work.” 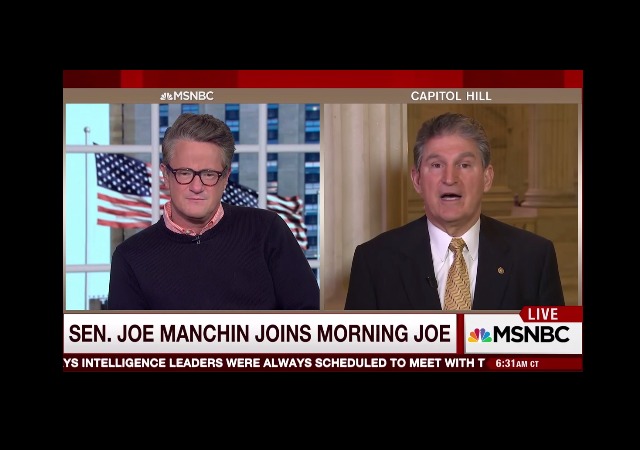 Sen. Joe Manchin (W-VA) told Joe Scarborough on Morning Joe that he will not attend a meeting with President Barack Obama to discuss how to save Obamacare:

“No, I’m not. I just can’t, in good conscience, I can’t do it,” he said. “If anyone listened and paid attention to what the American people said when they voted, they want this place to work.”

“With all of the respect of all of these people involved, but we had the outgoing president coming up here to talk to only Democrats, we have the incoming vice president coming up to talk only to Republicans. Joe, that’s not what makes this place work and that’s really what is wrong with the place,” he argued.

Manchin has admitted in the past that “Obamacare is ‘not perfect,'” but does not want to go along with the Republicans by throwing it out completely:

“I’m willing to look at replacing, repairing, doing anything that we can to make it better but put something on the table. I just can’t believe the Republicans will go down this path and just throw it out and say trust us, in two or three years, we will fix it,” he said. “I’ve been here six years. We haven’t fixed very many things. And anyone has trust and belief that we will fix, they’re living in fantasy land.”

.@Sen_JoeManchin says he won't attend Pres. Obama's Obamacare meeting with Dems: In good conscience, I can’t do it https://t.co/qAVr56Pzwu

After President-elect Donald Trump won in November and the GOP maintained control of Congress, many vulnerable Democrats decided to eat crow and show some eagerness to work with the new administration, including Manchin. He warned the Democrats “it would be folly for his party to immediately announce opposition to Trump’s proposals while Democrats were still licking their wounds.” From Politico:

As they came to terms with the likelihood of a Republican-controlled Congress and White House for the next four years, Democrats floated infrastructure and trade as potential areas of collaboration. Conservative Democrats like Manchin might find common ground with Republicans on energy policy. And perhaps, [Rep. Gerry] Connolly suggested, there could be compromise on social issues.

The talk of possible cooperation came as Republicans spoke of repealing Obamacare and overhauling the tax code through reconciliation, an arcane process that allows the GOP’s narrow Senate majority to evade the supermajority requirement.

Obama told the “Democrats not to ‘rescue’ Republicans by helping them pass replacement measures” and call whatever they propose “Trumpcare.”

“If anyone listened and paid attention to what the American people said when they voted, they want this place to work.”

…which is why Sen. Manchin plans on sitting in a corner with his hands over his ears and humming loudly instead of actually doing the job he was elected to do and represent his constituents.

Excuse me? Yes, we seem to have hired a defective congressman. Can we get an exchange?

As near as I can tell, getting rid of Obamacare is one of the reasons why Trump won and Congress is majority republican.

So when do you switch parties, Joe? And you, Heidi?

Whatever happened to Manchin’s daughter’s $$$?

Whatever happened to Randolph Scott?

Gone the way of the buffalo.

West Virginia Senator Joe Manchin (D) about to do an Arlen Spector in reverse?
“I didn’t leave my party, my party left me” Senator Zell Miller (D-GA)

Why does ObamaCare need to be replaced? All Republicans need to do is get the Feds out of the health insurance industry (including Medicare and Medicaid), allow insurance companies to sell across state lines, and get out of the way…the States will keep an eye out for their citizens better than the feds (at least, in those States not managed by Democrats)…for no matter what the Federal govt. sticks their nose into, the process breaks, criminals take advantage of the govt’s unwillingness to combat fraud, and the land they “save for future generations” invariably get polluted or mismanaged.

Then cut taxes, cut regulations 50% and send the Dept of Interior staff to Boise, HHS staff to El Paso, and defund Education, Energy, and HUD…all while ignoring the Democrats with bylines of the MSM.

Our legislatures passed some very cynical laws limiting wages in the past. Given that employers could not offer higher wages to attract new employees, the legislatures, even more cynically allowed employers to pay for employee medical costs in lieu of wage increases. This, in effect, transferred control of a huge chunk of employee wages to the employers.

It was only a matter of time before the government decided that they could, most cynically of all, wrest that control away from the employers and take control themselves, thereby increasing their power over private citizens.

Currently, states regulate insurance industries and many do so to increase their control over private citizens by requiring certain coverage requirements to meet whatever religion they have currently adopted. Many states require pregnancy coverage for men, children of both sexes and post-menopausal women for instance.

That would, in effect, make the federal government the insurer with the insurance companies contracting for the administrative role.

The big picture is that obamacare has less to do with healthcare than with control of the populace. It is a fascist enabling act, and needs to be obliterated.

Exactly. The only problem is that the legislature has purposely established its rules such that it can easily (and cynically) claim that it doesn’t have the votes necessary to obliterate bad legislation.

To paraphrase Thomas Sowell: If your house is on fire, when you get rid of the fire, what do you replace it with?

Trusting our legislation and laws to our legislatures is a fool’s errand which results in a ratchet effect that insures an ever larger government. Allowing the legislative bodies to create and enforce its own rules is a large part of this problem.

Such an amendment would keep congress busy renewing sunset provisions and would all but eliminate or soon terminate excessively partisan legislation such as ObamaCare. That is, the legislation must be passed five consecutive times before it has any hope of becoming permanent.

“As they came to terms with the likelihood of a Republican-controlled Congress and White House for the next four years, Democrats floated infrastructure and trade as potential areas of collaboration.”

This is the Demorat party in action! They will agree with the Repubs as long as they are all spending our money. It doesn’t matter what on, just that they get to spend it. No talk of totally cleaning out the federal employee union rules and structure. No talk of totally re-working the VA and getting rid of the dead wood there. These are things that need to be done and would actually save money but that is not the Demorat way. obama had his “Stimulus” bill and over 80% of it went to blue states. Then, of course, he had his “Green” investments that have all since gone bankrupt! But guess what? They all used our money! I look at the up coming year as a battle for America’s future. If Trump and/or the Repubs weaken, we are doomed to become a third world nation ruled by idiots.

What Manchin should have said: I would like to be re-elected again and attending that meeting is not consistent with that goal.

Manchin is NO Zell Miller.
Just an opportunist hoping for a DT appointment.

He won’t get one. The Governor of WV is a democrat. Unless, of course, President Trump makes a deal…

He is laying the foundation for a party switch if the democrats try to punish him.