It’s amazing what a slice of humble pie will do to you. 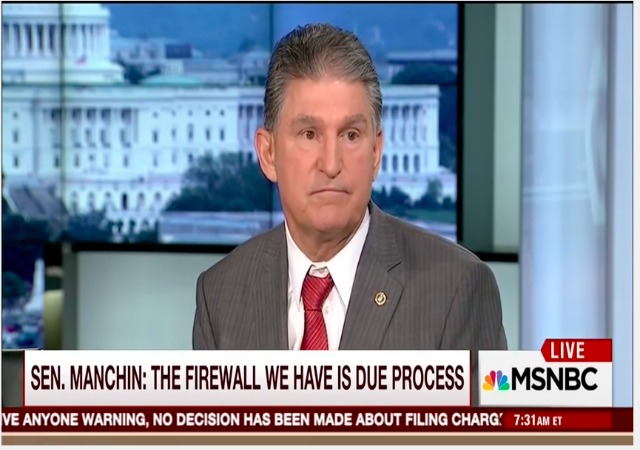 Oh how the tables have turned! Only a few weeks ago we talked about vulnerable Republicans, but the election put the GOP in charge of Washington, D.C., leaving the Democrats scrambling for ways to remain relevant.

According to The Hill, some of those Democrat politicians who face reelection in 2018 have expressed a willingness “to work with President-elect Donald Trump and Republican colleagues.”

It appears that new Senate Minority Leader Sen. Charles Schumer (D-NY) has taken a different approach from current leader Sen. Harry Reid (D-NV). Reid did not want members of his party “to work with vulnerable Republicans ahead of the 2016 elections.” But Schumer knows better than Reid and has told his colleagues they may “do what they need to survive in the next Congress.”

North Dakota Sen. Heidi Heitkamp (D-N.D.) is ready to work with Republicans on legislation to invest in “clean coal” technologies.

More broadly, she says she’s willing to work across the aisle on regulatory reform.

“My priority is standing up for North Dakota, not party politics. The reason I’m in the U.S. Senate is to work with Republicans and Democrats to get things done,” she told The Hill in a statement.

Sen. Joe Donnelly (D-Ind.) is ready to work with the GOP and the Trump administration on military mental healthcare issues, curbing the exodus of U.S. jobs to foreign countries and combating the opioid epidemic.

“My responsibility to Hoosiers is to support the best ideas, regardless of whether the idea comes from a Republican or Democrat,” he said in a statement.

Sen. Jon Tester (D-Mont.) hopes to work with Republicans to reduce the deficit, clean up Washington by stopping former lawmakers from becoming lobbyists and passing legislation to improve service at the Department of Veterans Affairs, a major Trump talking point during the campaign.

“If it creates jobs, strengthens our economy, and is good for Montana then chances are I’m on board. We can’t just say ‘no’ because the idea comes from the other side of the aisle,” he said.

Sen. Joe Manchin (D-WV), another vulnerable Democrat, has remained a constant critic of Reid, even criticized the leader for his remarks about Trump after the election. He is another one who wants to make progress with the GOP “to pass the Miners protection Act, roll back ‘harmful regulations’ on coal, renegotiate trade policies and rebuild the nation’s infrastructure.”

The rollout, though, began immediately after the election when results humbled the Democrats. Trump completely rolled over Hillary, the Democrats did not pick up anywhere near the number of seats they expected to in the House, and the GOP kept the majority in the Senate.

Manchin warned the Democrats “it would be folly for his party to immediately announce opposition to Trump’s proposals while Democrats were still licking their wounds.” From Politico:

As they came to terms with the likelihood of a Republican-controlled Congress and White House for the next four years, Democrats floated infrastructure and trade as potential areas of collaboration. Conservative Democrats like Manchin might find common ground with Republicans on energy policy. And perhaps, [Rep. Gerry] Connolly suggested, there could be compromise on social issues.

The talk of possible cooperation came as Republicans spoke of repealing Obamacare and overhauling the tax code through reconciliation, an arcane process that allows the GOP’s narrow Senate majority to evade the supermajority requirement.

Rep. Tim Ryan (D-OH), who has also challenged Pelosi for leadership, said after the election that he “will be listening closely as [Trump] begins to discuss his plans for our future. I stand ready to work with him in any way that will benefit the constituents of my district.”

And why the hell not? It’s Collectivism, all the way down.

Tester claims he will work with republicans to reduce the deficit. What that means is he will vote against military and border control measures.

All your Democrat are belong to us

Sound bites for the rubes back home is what they’re thinking.

Now they can work across the aisle. The implication being if they were in a stronger position they wouldn’t, or now that they don’t have Reid’s thumb on them they feel they can?
They should unload Pelosi, too.

Politicians from states which usually vote opposite party have always been that way. They have always worked with opposition, and were always understood to be just barely in the party. People like Scott Brown, Christie, Collins, etc, might be Republicans but they are not expected to be *very* Republican or conservative. They are “best we can do in those states”.

This article shouldn’t have been written or posted.

I think we should go nuclear option and eliminate the filibuster entirely. Reid built the foundation for this, which set the precedent. As we enact our agenda, reach out to the Dems in an adult fashion but pursue our agenda on all 8 cylinders.