“Where is your sense of decency?” 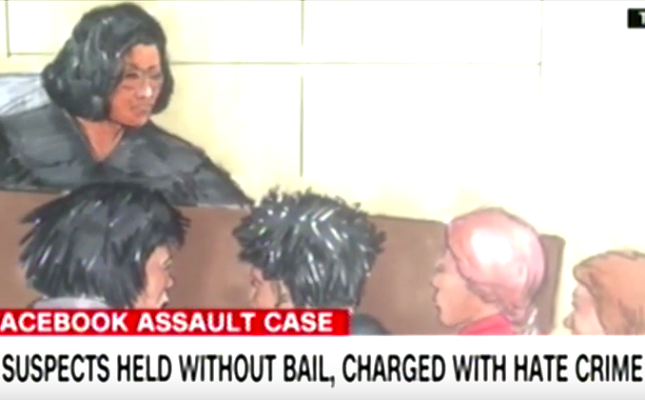 The horrific series of crimes against a mentally disabled teenager and streamed live on Facebook has shocked and horrified many (but not all, apparently).   The four attackers who tortured and abused the teen appeared in court and were denied bail.

One day after a chilling live Facebook video made headlines, four suspects appeared in a packed Cook County courtroom Friday to face hate crime charges alleging they beat and tortured a mentally disabled teen in an attack that once again put the city’s ugly violence problem on display.

A media throng descended on the Leighton Criminal Court Building for the first appearance by Jordan Hill, Tesfaye Cooper and sisters Tanishia and Brittany Covington since the brutal images captivated and alarmed a world audience.

Dressed in street clothes, the four entered bond court amid heavy security, Cooper smirking as he walked to stand before the judge. As Assistant State’s Attorney Erin Antionetti detailed the charges, a friend of the victim’s family seated in the courtroom gallery nodded her head and wiped tears from her eyes.

A short time later, Judge Maria Kuriakos Ciesil ordered the four held without bail, citing the egregiousness of the allegations.

The judge addressed each defendant individually, noting that Brittany Covington was going to college, her sister was a parent, Cooper had a paralyzed brother and Hill lived with his mother.

“I’m looking at each of you and wondering where was the sense of decency that each of you should have had?” Ciesil said. “I don’t see it.”

During the proceeding, much more was learned about the as yet unnamed teenaged victim and the series of events that culminated in his escape from his vicious captors.

For the first time, authorities alleged that Hill, who knew the 18-year-old victim from attending the same alternative school in Aurora, first beat the victim in the back of a van after he became angry that the teen’s mother was contacting him by Facebook about her son’s whereabouts. Prosecutors said Hill demanded $300 from the victim’s mother if she wanted her son back.

It wasn’t until later that the live Facebook video captured the abuse in the sisters’ apartment in the 3300 block of West Lexington Street.

Prosecutors revealed in court that the 18-year-old victim, who lives with his parents in suburban Streamwood, has schizophrenia and attention deficit hyperactivity disorder.

It was also revealed that the teen victim was threatened repeatedly with death and that he feared for his life throughout the ordeal.

Angered by the mother’s Facebook contacts, Hill, who by then had stolen a van and bought and smoked marijuana with the teen, beat the victim in the back of the van, prosecutors said.

Shortly after the two arrived at the sisters’ third-floor West Side apartment, Hill started to harass and slap the victim, prosecutors said. Armed with a knife, Hill was joined by Cooper in ordering the teen to face the wall in a corner, screaming at him and forcing him to kiss the floor and say, “I love black people,” prosecutors said.

By Tuesday, Brittany Covington began posting the abuse live on Facebook, prosecutors said. The shocking 28-minute video showed the victim crouched in a corner and mostly motionless with an expression of fear on his face. His mouth was taped shut and his hands and feet appeared to be bound with orange electrical tape.

Among the abuse seen on the Facebook video, prosecutors said, was one of the women laughing as she punched the teen; a male foot on the victim’s head; the teen groaning in pain as a male pulled a cord around his neck; and the victim screaming in fear when a male approached with a knife, saying, “Should I shank his a–?”

One of the GoFundMe pages set up for the victim has thus far raised $83,053 for this traumatized young man.

Meanwhile, David Boyd, the victim’s brother-in-law, said Friday that the teen has been “struggling” to recover after his ordeal but is safe with his family.

A man who runs a Reddit site called Uplifting News started a GoFundMe page for the victim that had raised nearly $70,000 as of Friday evening from more than 2,400 donors, according to the fundraising website. Razor Sheldon, of San Francisco, said he does not know the family but wanted to focus on helping the victim rather than seeking vengeance against the perpetrators.

On his fundraising page, Sheldon called the crime “horrific” and wrote of the victim: “Let’s prove to him that there is far more good in this world than the evil he experienced.”

Boyd said he spoke with Sheldon and GoFundMe to verify the legitimacy of the fund and said a family member had set up another GoFundMe campaign.

He said the family is grateful for the outpouring of support but added: “We’re not asking anyone for anything. We’re a little overwhelmed. We don’t want to take advantage of anybody.”

It won’t take long for leftists to justify what these sociopaths did by claiming that Racist America! drove these poor young black kids to do it. The Soros’ of the world will jump at the chance to finance racism charges in order to co-opt them to their own purposes.

“…where was the sense of decency that each of you should have had?”

It was assassinated by the Democrat Party.

Sounds like somebody’s handing them an opening for a novel defense. Something involving “cultural appropriation”, maybe.

I can’t see how any of the Facebook Four could avoid long prisons sentences….but, this is Obama’s America.

I guess they were helping him check his privilege.

While I approve of being hard on people who commit such crimes, I disapprove of the Hate Crime meme. It’s a way of saying that my political clients’ lives are worth more than the lives of your political clients–Oh, yes; every now and then I’ll throw you a bone. That should not be part of our law. It should be enough that these punks get tried for kidnapping, aggravated assault and battery, and any other charge that applies.

Back when Dubya Bush was Governor of Texas, I understand he did not even pretend to be gone fishing when asked to grant executive clemency to the men who dragged James Byrd to death behind a pickup truck, and the killers were executed. Yet there was an outcry that Texas did not treat the crime as a “hate crime”. Never mind that murderers with a nasty motive got what murderers ought to get.

For the life of me, I cannot figure out what a “love crime” or “simple respect crime” is. If you love or respect your neighbor, you will not kidnap, assault, murder, or rob him.

That’s bull***t. Hate crime laws are almost always applied equally, not just “every now and then”. It’s got nothing to do with whose lives are worth more, and everything to do with the fact that motive matters.

Motive has always been a factor in sentencing, because it has always been accepted in our society that the same crime can be better or worse depending on why it was committed. Even Thomas Jefferson’s criminal code for Virginia said that killing someone for pay is worse than doing so for most other reasons, and certainly worse than doing so in the heat of some sudden anger.

In exactly the same way, graffiti can be a mere act of petty vandalism if it’s merely intended to impress ones peers, or a serious crime if it’s intended to strike paralyzing terror in the hearts of an entire community. It would make no sense at all to give the two graffitists the same penalty.

Motive has always been a factor in sentencing

So what’s the excuse for the modern mania for codifying these customs as laws? If the customary methods were adequate for the last few centuries, any attempt to finagle with them must be inspired by … what? Nothing helpful, that’s what.

What is with that sketch artist’s drawing? The four suspects look awfully pale in comparison with their mugshots. If I didn’t know better, judging by that sketch, I’d say the judge was black, the two male suspects were Hispanic (maybe even “white Hispanic”, like George Zimmerman), and the two female suspects were Caucasian.

Is someone (still) trying to “white-wash” this?

Even the media’s artists are corrupt.

THE REAL FACES BEHIND THE CHICAGO RACE HATE TERRORISTS:

Let’s see if any or all of these defendants get lenient treatment from the criminal justice system the way defendants from other communities who torture, rape and assault their prey: