“But can we just say: The Netherlands second?” 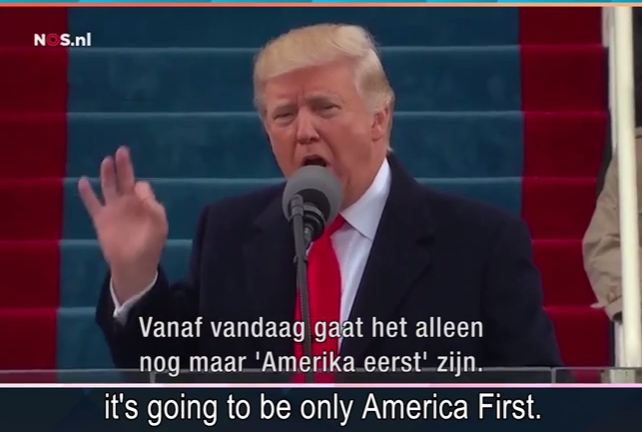 President Trump’s “America First” Inauguration speech has been parodied in a comedy video from the Netherlands.

A news satire show, Zondag Met Lubach, released a fake tourism advertisement aimed at Trump. It’s worth watching past the trite, Trump-bashing introduction in Dutch for the hilarity that then ensures in English (the very best language).

A sample of the script:

“We speak Dutch,” the voiceover explains. “It’s the best language in Europe. We’ve got the best words. All the other languages failed. Danish … total disaster. German is not even a real language.”

I voted for Trump. However, unlike sour progressives, I can still laugh at the foibles and quirks of the man. Many other Trump-supporters agree. I suspect that the Euro-elites who produced this video will be shocked to discover that their send-up merely confirms our choice. 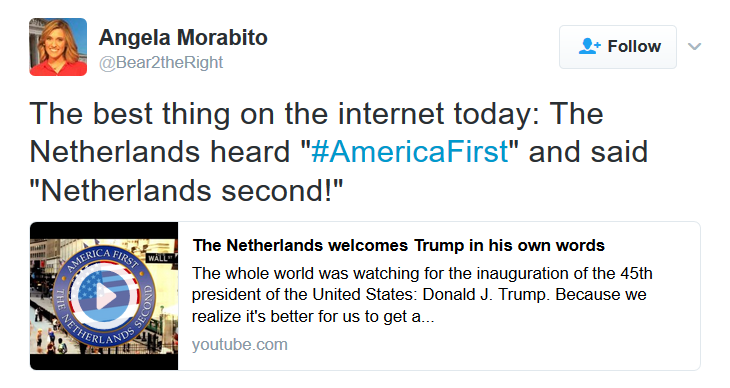 Yes, there is the trite snark. But at this point, most Trump supporters simply roll their eyes and don’t get hysterical.

This, again, differentiates us from humorless progressives.

In many ways, this video humanizes Trump, which makes him easier to genuinely like. If his speech inspired the Dutch to take a look at what makes their country great, then that is an added bonus.

I would like to remind the video producers that the regular Dutch people would relish a little “Netherlands First” attitude from their own representatives. In June, my colleague Vijita Uniyal reported that there was a call for #NExit, a Dutch referendum on EU membership following the British vote.

Furthermore, the Netherlands have had to address the threat of Islamic extremist terrorism (like much of the rest of Europe). In fact, Anis Amri, ISIS terrorist responsible for the Berlin Christmas market attack crisscrossed the Netherlands on his way across the continent before he was shot dead in Italy.

U.S. and coalition forces bombed the Islamic State 31 times on the first day that Secretary of Defense Mattis was in office. Trump is now reaching out to regional allies, and ensuring they have the resources necessary to identify and destroy terror cells, weapons, and equipment.

Dutch entertainers many never fully appreciate Trump’s “America First” approach. However, if it makes the Netherlands safer and more prosperous, then their audience may soon be donning red, “Maak Amerika Weer Groots” hats.

You would never make it as a Dutch comedian.

It’s Netherlands 2nd, n.n. begging for hope and some change in front of the wal-mart.

Good to see how continuously butt hurt you are, though. That feeling is like Christmas morning.

They’ve nailed Der Donald. Isn’t he Dutch on daddy’s side?

That was pretty good. Wait. It was satire wasn’t it? Those wooden shoe wearing William of Orange descendants better not mess with our Donald of Orange. No contest. America First, Hans Brinker! America First!!!!!!

Give them credit for a good video. They properly know their place. We’re yuuge. They’re not.

Actually, I thought it was funny. But can you imagine, if they’d done a video like this when Obama was elected in 2009? The lunatic left would have been calling for bombing raids on Amsterdam.

My folks took me to Madurodam back in 1959.
I didn’t even remember what it was called.
Making my childhood great again.

That was funny… they nailed his tone and phrasing.

Since they handed their colonies over to the Brits, being unable to defend or administer them, it’s going to have to be America First, Britain Second and maybe Netherlands Third.

In 1976 I left at least an ounce and a half of brain cells in Domburg, Netherlands.

Made my day. Hilarious!

I watched this earlier today and did not find it “hilarious”. It was full of smears and snarky anti-Trumpisms in it. I guess the never-trumpers enjoy it. I was kinda funny and then got off-puttingly sarcastic.

I understand your reaction, but I liked it. I took this as specifically being a response to Trump’s “America First” speech, and most Euro’s have responded in a far nastier version than this. Yeah, they took digs at Trump, but they had a lot of self-deprecating humor as well, which always makes it feel much more good natured.

Compare this, which really was funny and made me laugh, to anything American outfits like SNL have done recently.

Not a never trumper but it was funny…gotta have some sense of humor and laugh this off.

It’s funny to see a bunch of white Euros dance around in blackface and suggest Trump is racist. Sounds kinda like the good ol’ US of A these days.

That was a hoot! Whoever did the voice of Trump did a fabulous job. Thanks for posting.

Loved it! Had me LOL-ing there a few times.