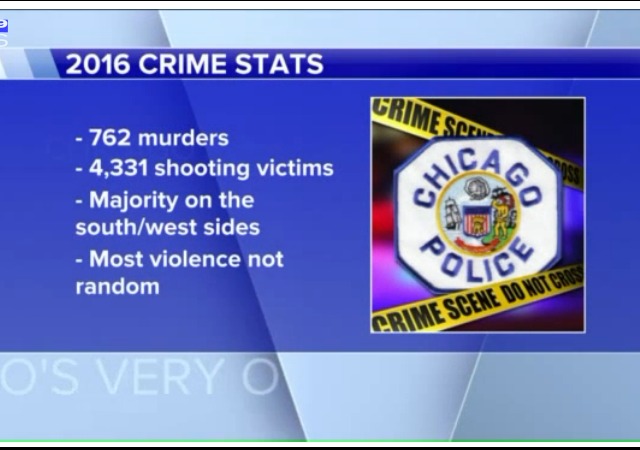 That strict gun control in Chicago has obviously worked. America’s third largest city had 762 homicides in 2016, the most in two decades and more than New York and Los Angeles combined. It also saw 3,500 shooting incidents, which is 1,100 more than it had in 2015. From WGN:

According to the Chicago Police Department, there were 762 murders in the city in 2016 and 3,550 shooting incidents with 4,331 shooting victims. A department spokesman says more than 80% of the fatal and non-fatal shooting victims were previously identified by police as being likely to be involved in an act of gun violence, either as a victim or an offender.

Most of the murders occurred on the city’s South and West Sides.

The police department also “recovered 8,300 illegal guns in 2016, a 20 percent increase from the previous year.”

It does not help that Chicago Police Superintendent Eddie Johnson remains delusional about guns and the gun laws in Illinois. From The Associated Press:

He also said it’s becoming clearer to criminals that they have little to fear from the criminal justice system.

“In Chicago, we just don’t have a deterrent to pick up a gun,” he said. “Any time a guy stealing a loaf of bread spends more time pre-trial in jail than a gun offender, something is wrong.”

Johnson, who has for months complained about Illinois’ lax gun laws, said he thinks more and more gang members are arming themselves because the price for being caught is small compared to other large cities. He said gang members he has spoken to consider the court system “a joke.”

Um, okay, bro. LAX gun laws?! Is he insane? First off, for the longest time, no one could purchase a firearm in the city. In 2014, a judge ruled that unconstitutional and reversed the law. But of course the Chicago officials have done all they can to make sure Chicago citizens have a tough time purchasing firearms legally to protect themselves. They restricted gun shops to certain parts of the city and videotape every purchase. A citizen can only purchase one gun every 30 days.

The state of Illinois requires a person to undergo a 16-hour test to obtain a conceal carry license, which is one of the longest in the nation. The purchaser must also wait 72 hours for a handgun and 24 hours for a rifle or shotgun.

How can he blame the lax gun laws when officials have kept gun shops 99% out of the city?! This just goes to show that criminals will find a way to obtain a gun no matter how many laws stand in their way.

But as Heather Mac Donald, a fellow at the Manhattan Institute and author on The War on Cops, points out in The New York Post, the stats also go in hand “with the de-policing and decriminalization movements sweeping the country.” The officers have backed off since “maintaining control of the streets constitutes racial oppression.” She wrote:

Arrests are down 28 percent this year in the Windy City, the lowest since at least 2001, according to the Chicago Sun-Times, and less than half what they were in 2010. Drug arrests are down by half. Pedestrian stops were down 82 percent by early fall.

But that distinction between serious crime and an allegedly less urgent breakdown in public order is specious. The best way to get gangbangers under control is to maintain street order.

In Baltimore, drug arrests plummeted after the Freddie Gray anti-cop race riots in April 2015. Shootings exploded as a result. After the Obama Justice Department blasted the Baltimore Police Department in August 2016 for its practice of “clearing the corners” of large groups of teens, small business owners and residents in West Baltimore begged the cops to clear the corners again, because crime and drug-dealing had spiked so much.

Johnson admitted that the release a video in November 2015 of officers shooting 17-year-old Laquan McDonald has caused friction between citizens and cops. Back in October, Johnson also admitted that his cops have second-guessed themselves in fear of becoming the next viral video after a cop did not defend herself against a man who beat her unconscious.

It’s also fitting that President Barack Obama, one of the most anti-gun presidents we have endured, will deliver his farewell speech in Chicago on January 10. After all, he has called on Congress to use Chicago’s gun laws as an example when drafting new anti-gun laws.

It’s also fitting that President Barack Obama, one of the most anti-gun presidents we have endured, will deliver his farewell speech in Chicago on January 10.

Even more fitting if he could deliver it from the deck of a ship named ‘Hope & Change’, as it sinks into Lake Michigan.

Its illegal to pollute Lake Michigan

Many of the victims (or their survivors) refuse any interaction with the police.

Chicago gangs must all wear pussy hats or something.

Our old motto used to be: Detroit, where the weak are killed and eaten.
We’ve fallen so far.

But the good news is our Chief of Police tells the citizens to arm themselves as the cops can’t be everywhere. How many other big city police chiefs will do that?

– a citizen can only vote once every 30 days.
– person must undergo a 16-hour “Jim Crow”test to obtain a voter registration
– must wait 72 hours in line to vote in a national election, 24 hours for a local election

… the stats also go in hand “with the de-policing and decriminalization movements sweeping the country.”

Nonsense. The stats go hand in hand with law-abiding citizens being criminalized for attempting to practice their Constitutional rights to protect themselves.

You and Tim can look out any window right now and see neither cops or crimes being committed. Not because of a gear of what may happen to you if you’re caught committing a crime, but because most people aren’t criminals. When you and I are denied our 2A rights, and the legal system is known to be broken, gangs will move in to prey on the weak. There is a myth that cops protect people. Cops aren’t precognizant, or omniscient, or in anywhere near the sort of numbers to prevent criminals from engaging in illegal behavior, so the best that they can do is show up 99.9% of the time after a crime has been committed. How does that protect anyone?

Liberals, in typical defiance of logic, lambast cops and disband or hamstring them whenever possible, and yet rely heavily on them to enforce arbitrary laws which deny law-abiding citizens their 2A rights, thereby making everyone a potential victim of crime. Liberals don’t want rights or cops. It’s a sickness.

Sorry, that should be “you and I”.

Predictable. It’s part of Dick Daley’s legacy. It follows the axiom that fewer guns produce more crime. In Chicago, about 1,400 criminals commit all the murders serious crimes. Hopefully, Trump will pressure Rahm to round ’em up, jail ’em and forget ’em. That also will simplify rounding up Luis Gutierrez’ voters. Remember them? They’re the astonishing number of illegal aliens living in this colossal sanctuary city, particularly in Luis’ gerrymandered 4th District.

A disconnect and denial of reality from many sides:

A road rage death, resulting from the victim hitting the shooter’s Mercedes, was “the 762nd homicide for the year – the most since 1996, when there were 796.”

CPD Chief Ed Johnson: ““I still get on the street quite a bit, I’ll still talk to gang members,” Johnson said. “Almost everyone I talk to will say, ‘I knew it was wrong. But I still chose to do it.’ The mentality that you’d rather CPD to catch you with a gun than your rival to catch you without it, that’s Bizarro World. It shouldn’t be like that. We should have a culture where everyone is accountable.””

Current legislation controls the legitimate sales and usage of weapons, but does nothing to alter the demand for firearms that encourages the thriving of a black market that meets the demand.

Restrictions in legal ownership of weapons in Australia had the effect of expanding the black market in weapons:

If their marksmanship was better, they could have reached 1,000.

I guess lack of Federal marksmanship training, and providing proper ammunition, is another example of systemic racism.

According to the perfectly unbiased, non-Jew-hating, non-kapo, non-GOP-hating, brilliantly insightful folks at CNN, this is all due to racist white people in Indiana, led by Mike Pence, and their lax gun laws.

I guess, of course, those same Indiana guns were taken all the way to Baltimore so that the draconian gun laws there could be circumvented.

That number is 795 once the highway shootings, police involved and self defense are included. Will likely go higher once the ~40 2016 death investigations are reclassified as murders.