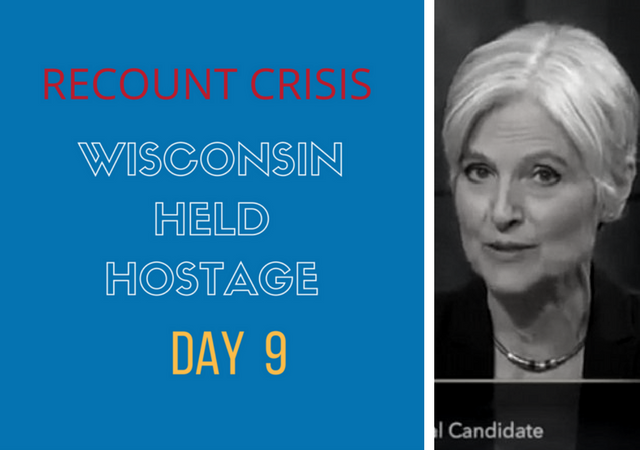 Failed Green Party presidential candidate Jill Stein’s recount scampaign isn’t going quite as planned. The recount never made it off the ground in Pennsylvania and both federal and state courts agreed there was no need for a recount in Michigan as Stein did not qualify as an “aggrieved candidate”.

It’s day nine of the state-wide presidential ballot recount in Wisconsin and a federal judge refused to halt the recount, which is mostly complete, saying the recount results won’t affect the outcome.

Trump defeated Hillary Clinton by more than 22,000 votes in the state. Wisconsin election officials reported Friday afternoon that nearly 89 percent of the ballots cast for president have been counted. Clinton had gained just 49 votes.

“The relief you’re asking for is so clearly unwarranted,” U.S. District Judge James Peterson said during a 20-minute hearing Friday morning, when the results showed Clinton had gained 61 votes with 82 percent of ballots counted. “The recount looks like it’s going smoothly and competently. It’s not going to have any impact on whether the electoral college meets or who takes office.”

Green Party presidential candidate Jill Stein, who finished a distant fourth in Wisconsin, requested the recount to determine if election machines were hacked. Two pro-Trump groups, the Great America PAC and the Stop Hillary PAC, filed a federal lawsuit Dec. 1 — the day the recount began — to stop the process.

Peterson said Friday that the Wisconsin recount has so far revealed no irregularities.

In Wisconsin, the PACs’ lawsuit contended the state was violating the U.S Supreme Court’s 2000 Bush v. Gore ruling because the state lacks uniform standards to determine which votes should be recounted.

Peterson would have none of it. He said the Bush v. Gore case doesn’t apply in Wisconsin’s recount. He said final decisions are often appealed but that doesn’t mean they’re not final.

“You’re just trying to clip Stein’s wings as to any future appeals when she hasn’t taken any action,” Peterson said. He said he would decide in a few days whether to dismiss the lawsuit completely.

The PACs’ attorney, Michael Morley, said he would consult with his clients on whether to appeal.

This seems like a good topic for your dumpster fire graphic or maybe the locomotive going over the cliff (hint, hint).

Does anyone know where I can get a Jill Stein voodoo doll?

They surely know how to run an election in Wisconsin, what with all the recall elections over the last several years.

What is with these high cheekboned Harvard women? A mutation that should have generated cells for the rectum goes instead to the head and cheeks?

Stein didn’t have those high cheekbones four years ago. Methinks she had quite a bit of work done before this recent election: http://clearingthefogradio.org/wp-content/uploads/2015/02/funnamed.jpg

Milwaukee is still out, never underestimate the ability to “find” votes

Is Milwaukee still out? Even if it is, they are not going to find 22,000 votes there. Stop being such a pessimist. Game over

This was all a stunt to attempt to de-legitimize Trump., to add uncertainty and worry to Trump supporters and about the election process in general. It never had a chance from the start.

Judge sounds like a real tool. It’s unconstitutional, but it won’t change anything so who cares?

He would if they took the cost of the recount out of his salary.

“Clip her wings?” I hope he doesn’t think she’s an angel…more like a gnat.

Can a lawyer tell me if the “fruit of the poisoned tree” doctrine can apply here? Let’s say they think they found something on the recount that helped Hillary. If the recount should not have happened, should that be thrown out and the original results stand anyway?

Don’t be sillier than you have to be. Whenever considering an injunction, the chance that it will affect anything is always a prime consideration. The fact that it’s almost over is a very good reason not to stop it now.

And no, there is no such doctrine. If a recount were to find that Clinton really did carry Wisconsin, then it would turn out to have been a very good thing that the recount was carried out, whether it should have been or not. Getting the count wrong is always bad, and getting it right is always good, and nobody has a legitimate interest in a wrong count.