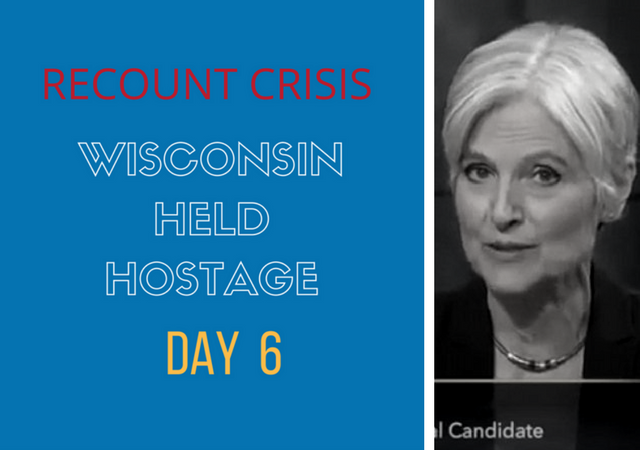 Wisconsin’s deadline is 8:00 PM, December 12. All reports indicate they’re on track to complete the recount on time. The recount has been remarkably drama-free and as we blogged yesterday, very little has changed in terms of ballot counts.

Our friend Mr. Morrissey has been keeping close tabs on the recount efforts:

Specifically, precincts that accounted for 55.15% of the original total vote (including absentees) have completed their recounts. https://t.co/X0XH4cGfFR

This evening, Fox26 reports 23 of 72 counties have completed their recounts and Trump’s lead has grown:

The Wisconsin Elections Commission says it is confident that voting machines in St. Croix County that had broken warranty seals are accurately tabulating and reporting results there.

The Commission issued a statement Tuesday, explaining why some of the voting machines in St. Croix County in northern Wisconsin had broken seals. It included an affidavit from a technician saying he broke them to service modems on the scanners. Commission officials said they’re confident the machines are accurately tabulating and reporting results.

The Commission said Green Party candidate Jill Stein’s campaign had representatives on site who verified the accuracy of ballots fed through the machines.

Statewide, President-elect Trump has added to his victory total in Wisconsin as the recount continues.

The recount in Wisconsin began on December 1st — and 23 out of the 72 counties were done as of December 6th.

In those counties, President-elect Trump has picked up 105 votes and Clinton has dropped 41 votes.

For those looking for a county by county breakdown, Fox26 provides the following:

This is where they run in the major Democratic districts last and the total magically swings into Hillary’s corner.

Never underestimate the determination of a corrupt government.

Still no word from Dane County (Madison) or Milwaukee County?

They’re still waiting to see how many bags of uncounted ballots they need to find in the trunks of their cars.

I wonder how many hungry people the cost of doctor Stein’s effort would feed. Oh… that’s right, we don’t care about hungry people because (you know) they didn’t go to the right schools and lots of them are, ummmm, not the right color.

Or how many thugs could be hired to start riots, a more likely expenditure of those wasted dollars.

Why, with the money Stein raised, Chelsea could have had TWO weddings!

55% after 6 days. Are they counting each county consecutively? Why is it taking so long? Let each county count their votes and then report to the state. Get it all done in a day or two.