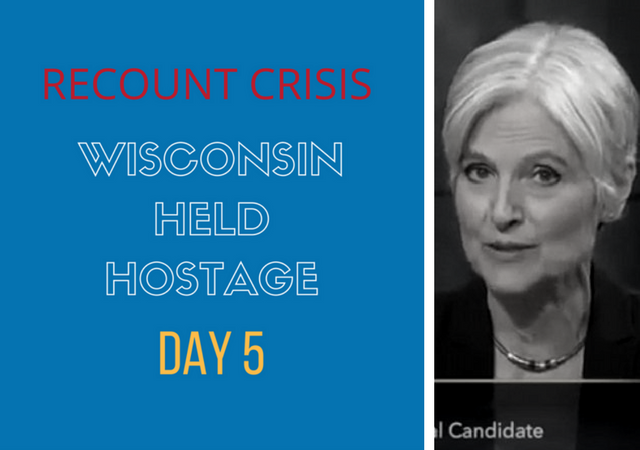 So here we are on Recount Day 5 and there’s very little change. Local press report a drama-free process.

Both Clinton and Trump lost 20 votes each in the six counties that had finished as of Monday morning. Trump won Wisconsin by about 22,000 votes. The recount that began Thursday was requested by Green Party candidate Jill Stein. She also requested recounts in Michigan and Pennsylvania.

Dane County Clerk Scott McDonell said Dane County is about one-third of the way done with its recount with more than 100,000 counted as of Monday.

“To date we have found that the machines are extremely accurate. As in any recount, a few ballots were marked in a way that could not be read by the tabulator, but the voter intent is clear. For example, the candidate’s name was circled but the oval was not completed. There have been a few examples of incomplete absentee certificates that has caused a draw-down of ballots per the recount guidelines provided by the state,” McDonell said in a release.

A draw down is the removal of a ballot to compensate for a ballot that should not have been allowed in the first place, but was allowed by mistake, according to the release.

“The process has been very smooth. The workers we have hired have been excellent and the observers have been diligent and respectful at all times,” McDonell said.

Wisconsin’s deadline is 8:00 PM, December 12 and everyone is on track to finish on time. A few county-specific updates:

The Commission is not able to provide a running statewide tally of how many votes each candidate is up or down. However, we continue to post daily update spreadsheets on our website comparing the votes for major candidates reported in the canvass to the number of votes reported so far during the recount. These updates can be found on the 2016 Presidential Recount page.

When a county has reported a vote difference of 10 votes or more in a reporting unit (ward or combination of wards), we are providing the board of canvassers’ explanation for the difference.

So far, changes between canvass results and recount results are due to human error.

Soon, a table providing each county’s status and links to the board of canvassers’ minutes and results will be available on the 2016 Presidential Recount page.

By Stein’s request, a recount was approved in Michigan which began Monday at noon.

Stein makes me so angry.

Me too. It’s amazing that one delusional person can create such an interruption in the process that was well established over twenty decades ago.

It’s not a delusion, it’s collusion with every leftist sorehead that hopes to annul Trump’s election. In addition to sorehead, Stein is acting as figurehead for all of them.

The only good that will come out of this is another humiliation for Hillary Rotton Clinton.

What percentage of the vote has been counted?

How is it possible states can post election results within hours (or sometimes before) polls close on election day, but recounts take weeks?

Al Franken May Have Won His Senate Seat Through Voter Fraud
http://www.usnews.com/opinion/blogs/peter-roff/2010/07/20/al-franken-may-have-won-his-senate-seat-through-voter-fraud

Election Day, each precinct/ward simply uploads totals to the county, and the county then tabulates and transmits county totals to the state. This goes on periodically throughout election night.

With this recount, it is the county that is physically handling each ballot of each precinct. It is a differnce of, say, a precinct counting 2,200 ballots put through a machine by the voters themselves vs. the county having to unseal, handle, examine, and tabulate the ballots of a couple-three dozen precincts.

A few Wisconin counties, with a small number of precincts, are already done. In Dane county (a.k.a. Moscow West) where the Democrat election commissioner (who used the State Democrat Party mailing list to request volunteers) decided to hand count every ballot. This will take much longer.

In this case of Al Franken I think it’s safe to say he was elected by vote fraud. The standard phraseology for referring to him should be, Al Franken, the fraudulently elected Democrat senator. If you have reason to write about him frequently, that should be saved as a macro. No matter what you’re writing about, that’s the only way his name should be referenced. Whether he’s attending a funeral, spotted at a restaurant, sponsoring a bill, or walking his dog, it should always be Al Franken, the fraudulently elected Democrat senator was doing this. He should never be afforded any legitimacy.

There is good news in all this.

Wisconsin, Pennsylvania, and Michigan: when the recounts are done we’ll see that the total vote counts change very, very little. A hundred votes per state at the most? Less?

This should inspire confidence that when a state has an honest vote, the results will stand (*). Our country could use that. And it will tend to shut up this nonsense in future years: “oh, you guys think the vote was a fraud? Remember Wisconsin, 2016?”

It is particularly useful if Ms. Stein and her donors burn a lot of cash to help us out with proving this point. We get a reliable recount AND impoverish some goofy progressives — a twofer!

(*) Not applicable in Chicago, Newark and Philadelphia.

Does anyone know the likely timeline for the Federal court to rule on Stein’s petition for a Statewide recount in Pennsylvania?

Since IANAL, I might be misinterpreting the statutes, but is it not the case that if recounts are not complete by the Safe Harbor date of the 13th, then that State’s electoral slate cannot be filled for the actual College vote on the 19th? This is uncharted territory as far as I know since even during the Florida recount of 2000 that we all so fondly remember, SCOTUS halted the recount the day before the Safe Harbor date. That doesn’t appear to be on the cards here, and even if it were, how much confidence can we have that the 4-4 tied court would rule to halt? At that point we’re in Twelfth Amendment territory, which as far as I know hasn’t had an airing (for this sort of eventuality) since John Quincy Adams’ time. Should the Federal court grant Stein’s petition, I don’t see how a recount could be undertaken in a timely fashion. Are there guillotine provisions for recounts in PA?

My handy dandy countdown clock that I’ve installed on my homepage says as of time of writing there’re 6 days and 10 hours to go until the 13th. I would hope that the judge would take that into consideration in making a ruling, but right now no-one seems to have even an inkling of when the damn ruling is going to be.