Not actually MoDo, but related. 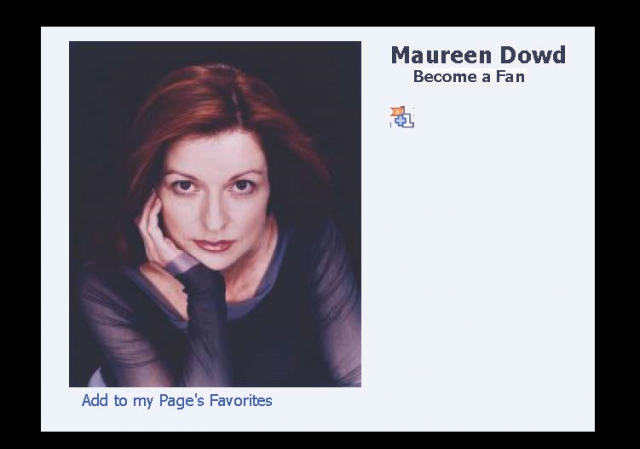 My take on Maureen Dowd:

Not sure what to make of this column, Election Therapy From My Basket of Deplorables.

It’s not therapy delivered by MoDo, but rather, by her brother Kevin, who is one of MoDo’s deplorables. But MoDo gave Kevin a big platform in which to taunt and troll people like MoDo.

The election was a complete repudiation of Barack Obama: his fantasy world of political correctness, the politicization of the Justice Department and the I.R.S., an out-of-control E.P.A., his neutering of the military, his nonsupport of the police and his fixation on things like transgender bathrooms. Since he became president, his party has lost 63 House seats, 10 Senate seats and 14 governorships….

Preaching — and pandering — with a message of inclusion, the Democrats have instead become a party where incivility and bad manners are taken for granted, rudeness is routine, religion is mocked and there is absolutely no respect for a differing opinion. This did not go down well in the Midwest, where Trump flipped three blue states and 44 electoral votes.

The rudeness reached its peak when Vice President-elect Mike Pence was booed by attendees of “Hamilton” and then pompously lectured by the cast. This may play well with the New York theater crowd but is considered boorish and unacceptable by those of us taught to respect the office of the president and vice president, if not the occupants….

The liberal media, both print and electronic, has lost all credibility. I am reasonably sure that none of the mainstream print media had stories prepared for a Trump victory….

As Eddie Murphy so eloquently stated in the movie “48 Hrs.”: “There’s a new sheriff in town.” And he is going to be here for 1,461 days. Merry Christmas.

Good MoDo is back. Or at least, KEVIN!

He got it right, although I’m not sure it was an equal repudiation of everything he listed. Some were important issues to voters. Some were less important. Any that impacted the economy and jobs was certainly at the top of the repudiation list. And he forgot that people are just sick of the professional political class that enriches themselves to the tune of millions while thumbing their noses at those who but then in the position to do that.

Nothing in that “repudiation” list about throwing the borders open to criminals, terrorists, and disease carriers with the apparent goal of transforming the country into just another third-world ****-hole.

I suspect that was a big motivator for my fellow Deplorables.

Won’t help them. Circling the lefty trauma centers this morning, they are still clueless. It’s not that they called every legit criticism “racist sexist homophobe!”, it’s that they didn’t do it loud enough.

It will never occur to them that we are not bigots. They will continue to dismiss our ideas with insults. It’s as if that’s the only tool their education has given them to use.

They will find racist dog whistles and nazi code in every little thing, subtle cues that only they can hear.

I’m thinking of playing into it, just for the laughs.

Agreed – its the best by far that you’d expect to see in New York times, but it does omit the role both immigration, as stated above, and also BLM. Obama’s tacit support of BLM ended up giving the green light for rioters to loot & burn while police officers were scared to do their jobs and even targeted for execution at times. That’s not just something the American people are going to ignore.

If Clinton had won, I would have been completely destroyed because it would have meant eight million illegal immigrant voters and the end of the country I grew up in. I am not sure what progressives feel Luke they lost.

Slight correction: the new sheriff will be in town for the next 2922 days.

Only if he runs for and wins re-election.

He may not run for re-election. He’s already 70, and will be the oldest president to assume office when he does so. The Presidency takes it’s toll, and while he’s already a Billionaire, at the end of 4 years, Trump may be ready to go back to the private sector. We won’t know that for about another 3 years.

I can point out a few cliffs for the liberals if they so desire.

The Washington Post, New York Times, CNN and MSNBC have been trying to spike the very real, solidly researched crimes found in the Podesta emails, choosing instead to present the most luridly exaggerated speculations that arouse out of pizza gate, instead, in an effort to discredit their media superiors.

A big story of this election is that the DNC, Clinton Campaign, and most of the media conspired to promote violence against American voters and blame it on DJT. It’s a real story, with video from Project Veritas, confirmatory emails from Wikileaks, and records of payments for rent-a-rioters in the Federal election database.

Shame on these failed media organizations, who have given in-kind contributions to the Democratic Party and completely lost their credibility. More shame on them for trying to cover up their foolishness by pretending that the Fake News originates anywhere but their own organizations.