Feds Pressed to Restrict Sale of Crawfish Across State Lines

Feds Pressed to Restrict Sale of Crawfish Across State Lines 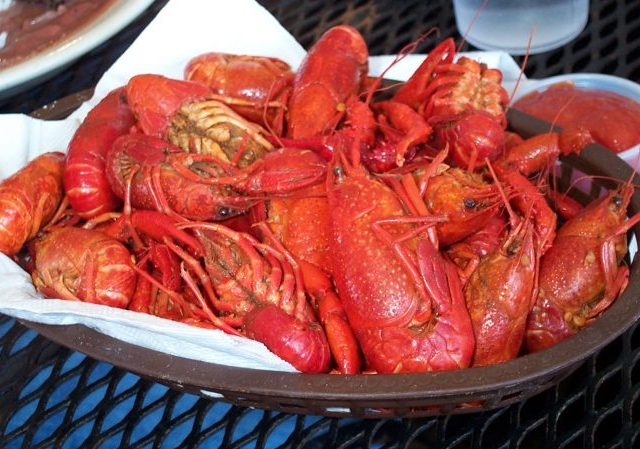 First they came for the mudbugs and I said nothing…actually, yes I did. We all know I always have something to say.

In any case, the latest push for MOAR government comes from Louisiana where a non-profit organization is urging the U.S. Fish & Wildlife Service to add Louisiana crawfish to the injurious wildlife list.

Louisiana’s crawfish industry could be in trouble if the federal government takes the advice of a nonprofit organization to regulate the red swamp crawfish.

The Center of Invasive Species Prevention recently petitioned the U.S. Fish & Wildlife Service to add the procambarus clarkii, better known as the red swamp crawfish or Louisiana crawfish, to the injurious wildlife list.

In the petition, the CISP says the red swamp crawfish and 42 other species don’t provide “any essential economic or other benefits” that outweigh their current and potential harm to the United States.

The Fish & Wildlife Service could impose punishment on those who buy, sell or trade red swamp crawfish if the species is added to the list.

…While crawfish are native and welcome in Louisiana, they have become a nuisance to bodies of water across the United States and beyond.

The red swamp crawfish outcompetes native crawfish and rapidly take over habitats where it invades, according to the FWS. This “agricultural pest” alters ecosystems, reducing the population of native creatures while changing water quality and sediment characteristics.

Conservation officials are concerned that red swamp crawfish found in a Minnesota lake could cause damage to levees, dams and water control structures.

Invasive species are in fact a tangible threat — no sense in arguing that. Dealing with non-native threats to ecosystems — also a real concern. The problem here is the push to involved the federal government in criminalizing or limiting the exportation of crawfish.

Louisiana is more than capable of handling this matter on their own, particularly as any restrictions on the mudbug industry would negatively impact countless small fisheries. Louisiana’s crawfish industry contributes more than $172 million to the state economy every year. Needless to say, the federal government’s “help” is not necessary.

But if the proposed changes are adopted, the sale and export of crawfish outside of the state could be limited or prohibited.

Louisiana’s annual crawfish production has increased from 61.1 million pounds per year to 127.5 million pounds per year over the last 25 years, according to the LSU AgCenter. Once available only regionally, Louisiana crawfish can now be found across the country, with some of the largest markets for mudbugs being Little Rock, Arkansas; Dallas; Houston; Austin, Texas; Mobile, Alabama; Memphis, Tennessee; and Atlanta, according to the AgCenter.

Down here in Houston, we look forward to crawfish season any time it’s not crawfish season. I love them in étouffée, my husband prefers them boiled. Crawfish (along with a good fish fry) are part of the shared culture between east Texas and Louisiana. You can find plenty of crawdads here in the Lone Star State, but even our local grocery store, HEB, boasts of selling the freshest Louisiana crawfish. Any export restrictions would create reaching ramifications, not just economically, but culturally.

Sen. David Vitter (R-LA) sent a letter to the director of the U.S. Fish and Wildlife Service asking that he reject the Center of Invasive Species Prevention’s petition:

“Anyone who knows anything about Louisiana is familiar with the importance of crawfish in our culture, cuisine, and state economy, which is why the current petition to shut down Louisiana’s crawfish industry is laughable,” said Vitter. “Any consideration to list the red swamp crawfish as an injurious species should immediately cease so as to not deprive Louisiana farmers of their livelihoods, nor rob Louisiana of one of its most famous and celebrated culinary traditions.”

You get a line I’ll get a pole, honey.

I, for one, would like add the Center of Invasive Species Prevention to the endangered species list.

Wouldn’t crawfish exported to other states as food be, er, dead crawfish? Excuse my ignorance if they are shipped live, like lobsters. But even if live, how is it that crawfish in a food market are going to end up anywhere but in cooking pots?

This was a question I had as well. They are shipped live, yes.

I make a crawfish bisque that is to die for. Thursday night would be the right kind of weather, too, since you need a cold night to eat it without dying.

Definitely NOT a warm weather dish…

Cold beer helps with the outside temperature. Go sauce piquant for a little more spice….

A Legal Insurrection south get together could be fun 🙂

… how is it that crawfish in a food market are going to end up anywhere but in cooking pots?

It’s easy imagine a PETA wacko buying all the live crawdads in a store, and taking them to a pond or lake to ‘rescue them’ and ‘let them live free!’

We eat a ton of LA crawfish here in SE Texas. Many wholesalers buy them. They’re shipped in mesh bags (onion sacks) and kept refrigerated under wet burlap sacks and stay alive for several days. The amount shown in the picture is what falls off a good platter 😉

Government regulations sure did a bang up job preventing the Lion Fish from getting into the Caribbean as an invasive species.

I put it right up there with other great ideas from our government including the Gun Free Zone and the Domestic Violence Protection Order.

YUP! “We’re here from the Government and we’re here to HELP you!”

Actually, roasted or broiled ‘dew-gooder’ sounds mighty tasty sometimes… Tender and juicy, and easy to catch – and the season is always open.

That is stupid, it would hurt Louisiana craw fish business severely and may even lead to a rise price, which already high because of the massive government. Crew fish went from you can get it any time is large quantity to a out right luxury that a person might get maybe once a year if lucky. Druids are always getting in the way.

They are going to far now! Mud Bug Lives Matter!

Who benefits. Try China. They are the main competition as they bring in frozen crawfish of questionable quality. Looks like someone is trying for some kickback, as usual.

If I could get crawfish up in Michigan I promise you they wouldn’t be kept as pets. They taste too good.
1/2 a gallon can of Zatarains crawfish boil (powder) works well.
I’ve found that boiling in a ton of seasoning then pouring swamp powder over them when you pull em out works best.
Also put them in a garbage can 1 sack at a time with fresh water and a bit of corn starch for about a 1/2 hour to clear the intestines.

Center of Invasive Species Prevention? Was it’s original function to keep Californians out of Louisiana?

I lived in NOLA for 5 years and then 3 more down in Houma. Mudbugs are good any way you cook them, but I have a recipe for Crawfish Pie (sort of a seasoned cream sauce with the meat) that is absolutely wonderful! Keep the crawfish coming, restrict the CISP!

When crawfish are outlawed, only outlaws will have crawfish.

Everyone seems to be ignoring the fact that some enterprising individuals are taking live crawfish from Louisiana and introducing them elsewhere in order to cash in. Invasive species introduced by humans are clearly a problem.

The question is: what other tools are available to prevent someone from taking these crawfish elsewhere with the intent of tossing them somewhere else to create a new farm.